“The Governor was stuck with a difficult decision. Due to the nation holiday falling on the second Saturday of May; National Pogo-Stick Day was on the same day as State Celebrate Pancake Spinning Day. How were they going to balance the competing celebrations?” – Roger L, 29 June 2017

I have occasionally included National something-or-another days in my Jolly Monday posts, and as you have probably noticed, frequently there are more than one special occasion days happening simultaneously.  For example, today, 30 June, is both ‘National Media Watch Day’ and ‘Social Media Day’.  Those two go pretty much hand-in-hand and shouldn’t cause problems.  Now yesterday, however, there were some six ‘National Days’:

I still don’t see a lot of conflict here.  One can honour Parchment Day by making some Buttercrunch, dropping it by the scoopful onto some parchment paper (known as ‘butter paper’ in the Middle East, as I discovered when my sweet neighbor Maha came one day to ask to borrow some ‘butter paper’), then taking a picture of it for National Camera Day!  Simple … three birds with one stone, so to speak.  I do not know what a ‘Bomb Pop’ is, so I will take a pass on that one.  But, one could, while the yummy buttercrunch is cooling on the parchment paper, cook up some waffles (cinnamon in mine, please) and then stand on the street corner passing them out to hungry people and shaking their hands at the same time.  See … you just have to do a bit of pre-planning.  But …

On the other side of the pond, a recent dilemma nearly became an issue of national security!  Imagine, if you will, trying to combine National Pogo Stick Day and State Celebrate Pancake Spinning Day!  Now, I know what a pogo stick is … I think we all tried one at least once in our youth.  I … um … wasn’t very good at it.  As a kid who wore leg braces and special shoes until age 8, pogo-sticking wasn’t my forte. At age 60 or so, I tried my neighbor kids’ scooter and I wasn’t very good at that, either.  He wouldn’t let me try it again a few days later.  Anyway,

Now, imagine the poor Guv trying to figure out how to combine these two holidays, both of which fall on the 2nd Saturday of May, or else choose one and only one to honour!  I would not want that responsibility, but … this year it got worse!  The dilemma wasn’t just one of which holiday to celebrate, but the Pogo-stickers demanded … DEMANDED, I tell you … to be allowed to spin pancakes whilst hopping happily on their pogo sticks.  Never mind that no single pogo-er had ever spun so much as a single bloomin’ pancake, nor had a single pancake spinner ever hopped so much as a ha’block on a pogo stick!  Oh what to do, what to do???

Well, the Guv called together his most trusted advisors and, one by one, they came up with some ideas.  First came the idea for a Tandem Pogo Stick, a pogo-stick-built-for-two, as it were.  One would bounce the pogo stick, while the other would spin the pancakes.  The other best option was to divide the day … pancake spinning in the morning, pogo-sticking in the afternoon.  The tandem thing ended in …

Which left no choice but for the split-day.  Simple, yes?  Wellllllll … maybe not.  See, the pogo-ers claimed the first half of the day, for they would be too tired and heavy after a morning spent eating pancakes.  But … the pancake-spinners … well, pancakes are breakfast food, so of course they got mornings.  The pogo-ers ate too many pancakes, fell flat on their arses, and … 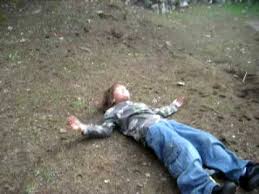 next year the Guv had better come up with a better plan. And then there were the cows, but that is a story for another day …

A bit of explanation for this bizarre post … yesterday, when I wrote this post, I was having a very down day, and all my attempts to be humorous turned dark.  My dear friend Roger, understanding as always, offered me a line and challenged me to do something humorous with it.  He made me laugh, and then he inspired me, and that, friends, is the source of this post.  I needed to laugh and couldn’t.  In fact, I had decided that THIS was why Van Gogh cut his ear off … to find some inspiration, a bit of humour. Many thanks to Roger for always knowing how to pull me back out of my dark places without me losing an ear … and for always making me laugh!

23 thoughts on “On Pogo Sticks, Pancakes, and Why Van Gogh Cut Off His Ear …”