Last week’s ‘good people’ story about the couple who adopted 88 children with disabilities is one that may not be top-able, so I won’t even try.  Today I shine a spotlight on three good people whose good deeds, though on a smaller scale,  did not go unnoticed.  Today’s first good person did not adopt 88 children, but he did adopt two …

Jody Thompson and his wife Jeannie did not plan for a large family … in 2015 they had two children already, Ryan (15) and Charley (8), and life was pretty fine.  Jody was a police officer with the Poteau, Oklahoma police department and it was just as he was about to go on duty on that day in April, 2015, that he responded to a call about a report of child abuse.

When Thompson and other officers arrived at the house, what they found sickened them.  Thompson, who had worked several child abuse cases before, said it was the worst he had ever seen.  8-year-old John was bound by rope, his wrists and ankles tied together, stuffed into a barrel, and the barrel filled with freezing water.  Once they extricated young John, they found that he was covered in bruises, severely underweight and had a large knot on his head.  The parents went to jail, and Officer Thompson took John to the hospital, where he spent the entire night and most of the next day watching over him.

Thompson says he knew when he saw John in that house that they were destined to become a part of each other’s lives. The Thompsons originally took John in as foster parents, and began adoption proceedings.  Around that time, they discovered that Jeannie was pregnant with their third child!  But wait … there’s more …

Seven months later, Jody received a call from the Department of Human Services (DHS) informing him that John’s biological mother, who was in jail awaiting trial for the abuse of John, had just given birth to a baby girl, and asking if Jody and Jeannie would consider taking her in as well!  They picked up the baby girl, Paizley, the next day when she was barely 24 hours old.  “Never in my life did I dream of having a large family, but God had different plans and so here we are. And I’m loving it all.”

Since then, the biological parents agreed to waive any and all parental rights, and the Thompsons have legally adopted both John and Paizley. Today, John Thompson is a straight A student in the gifted and talented program at his school. Poteau Police Chief Stephen Fruen commends his officer, saying “All of us can sit back and say we would do the same in that situation, but to come through with it and to do that, that’s a measure of a man – and a very good police officer.”

Two thumbs up to this caring, loving officer of the law and his wife!

Amy Wright of Wilmington, North Carolina, has two children with Down’s Syndrome.  Instead of feeling sorry for herself or them, she turned troubles into a positive.  “There’s a statistic that somewhere between 70-85% of individuals with intellectual and developmental disabilities are unemployed–and we just think that’s an embarrassment to our country.” So Amy decided to do something about that in her own little corner of the world. 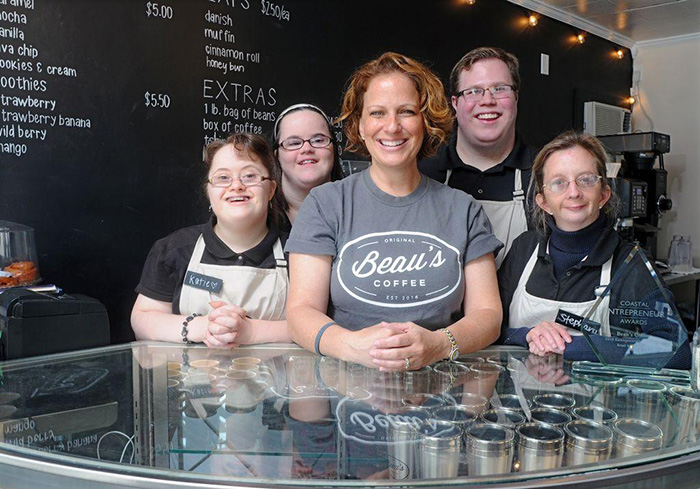 Wright founded Bitty and Beau’s Coffee, a coffee shop that employs 40 people with disabilities. “It hit me like a lightning bolt: a coffee shop! I realized it would be the perfect environment for bringing people together. Seeing the staff taking orders, serving coffee — they’d realize how capable they are.”

“Our wait time is no longer than any of our competitors. They’ve all gotten really good at their jobs and step up if somebody else needs help. Creating this has given people a way to interact with people with disabilities that [they] never had before. This is a safe place where people can test the waters and realize how much more alike we are than different. And that’s what it’s all about.”

Bitty and Beau’s employ more than 40 people with disabilities, as well as two store managers who have degrees in special education. All the profits from the coffee shop go to Wright’s nonprofit, Able to Work USA. But she’s most proud of the bridges it’s built in the community. Ms. Wright has appeared on CNN, been interviewed by Southern Living Magazine, and Bitty and Beau’s is the official coffee of the Rachael Ray Show!  Pretty impressive …

hats off to the Wright family for making a positive contribution to not only disabled people, but to their community as well!

‘Tis better to give than to receive, so we are told, right?  Well Jim Hukill believes that, and he translates those words into actions.  When Jim was just under two years old, he was diagnosed with a form of muscular dystrophy that doctors said would kill him by the age of 12. His parents never accepted that dire outcome, and Jim is still alive today at age 53!

Jim lived, but the disease left him a quadriplegic, requiring public services and community support all his life. In 1994 when he and his wife, Rhonette, were planning their wedding and preparing for their life together, they were surprised to find few resources for disabled people.  This led them, four years later, to form Eleos – The Care Network, Inc., a ministry of hope.  Eleos, in Greek mythology, was the personification of pity, mercy, clemency, and compassion.  Then in 2006, Eleos launched Lift Disability Network, an organization that provides the disabled and families of disabled with a plethora of programs, including camping, monthly events and family services. Services are available to families in need without regard to creed/beliefs.

Now all of that is very nice, however in 2007 Jim and Rhonette went a step further.  They launched an annual Christmas event called GiveBack. 100 volunteers – people with physical and intellectual disabilities and their families – filled 262 boxes of donated toys, school supplies, personal hygiene items and notes of encouragement for needy children in developing countries.

“It was incredible to watch people with disabilities be able to move beyond that position of being a recipient of services to being empowered to do something for other people,” Hukill recalls. “One man with intellectual disabilities told us, ‘I’m working really hard, and I’m loving every minute of it!’ He was just so excited to be contributing.”

The program has grown, and in 2014 there were 250 volunteers filling 2,121 boxes for Operation Christmas Child, boxes that went out to disadvantaged children in more than 100 countries including Ghana, Mexico, Niger and Zimbabwe.  Hukill is a humble man who gets around in an electric-powered wheelchair and uses voice-recognition software on his computer, employs self-deprecating wit to put strangers at ease. “I talk about my big head,” he says with a laugh.

Now, this final story is not really about someone doing good things for others, but in my ‘net surfing, I came across it and thought it was both touching and fascinating, so I decided to include it in this morning’s post.

Take a look at the above picture … take a close look … closer … can you tell what medium the artist was using?  Nope … nope … no, wrong again.  Let us try another: 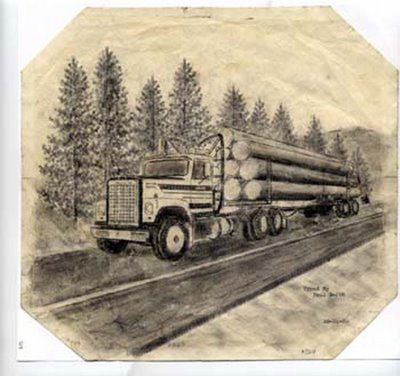 Now can you tell?  No, not that either.  Give up?  Okay … the artist is Paul Smith (he actually died in 2007 – no, he did not craft these pictures posthumously) and his medium?  A typewriter … not just any typewriter, but a vintage manual typewriter!

“While severe cerebral palsy may have put the traditional tools of an artist’s trade out of Paul’s grasp, his creativity and artistic prowess were unleashed in a surprising fashion—through the strategic placement of the ! @ # $ % ^ & * ( ) symbol keys with a single finger on this vintage typewriter. Fueled by his imagination and memories, he created more than 400 masterpieces before his death in 2007 at 85-years-old.” – Abilities.com

When he was 11-years-old, still 5 years before he would learn to speak, Paul discovered his own unique way of expressing himself using an old typewriter abandoned by a neighbor. As his mastery of the typewriter grew, he developed techniques to create shadings, colors, and textures that made his work resemble pencil or charcoal drawings. For more information about Paul Smith and his art, click the link above, and as for this post, I will let Paul’s work speak for itself. (The header image for this post is also one of Smith’s works of art)

28 thoughts on “Good People Doing Good Things – Many, Many, Many”