Today I am tired of writing about Trump & Co.  I have started two posts, one about the G-20 summit, and another about some strange goings-on among the White House staff his week.  Both remain ‘works-in-process’ at this point, not because I got bored with them, but because I realized I was disgusted by everything pertaining to Trump and the administration, Congress and their boot-licking legislation, and the whole works.  So, I was just flipping through some friends’ posts on Facebook, hoping to gain a fresh perspective, when I came across this:

And that led me to the thought of writing about somebody in Congress who is not driven by greed, not led by fear of Trump, but a true representative of We The People.  While it is true that there are others in Congress who have more of a conscience than the likes of Mitch McConnell and Paul Ryan, in my opinion, there are none to compare with Representative John Lewis.

Most of you probably know at least a bit of Lewis’ history, but please bear with me as I quickly recap for any who may not. 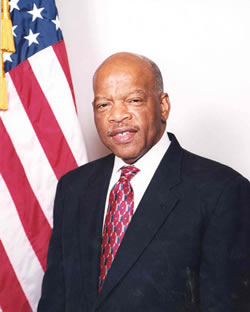 John Lewis, one of the most notable heroes of the Civil Rights movement, began his career as an activist in 1959, at the age of 19, by organizing student sit-in demonstrations, bus boycotts, and non-violent protests for voter and racial equality.  Then in 1961, he volunteered to participate in the Freedom Rides, becoming one of the original thirteen Freedom Riders. Lewis risked his life on those rides many times by simply sitting in seats reserved for whites. He was also beaten severely by angry mobs and arrested by police for challenging the injustice of Jim Crow segregation in the South.

Lewis’ was elected chairman of the Student Nonviolent Coordinating Committee (SNCC) in 1963, at only age 23!  As such, he became a member of the Big Six, leaders of six prominent civil rights organizations, and the organizers of the March on Washington for Jobs and Freedom, where Martin Luther King gave his I Have A Dream Speech.

5 minutes 17 seconds, and worth every second!

On August 28, 2013, the fiftieth anniversary of the march, John Lewis along with President Barack Obama, Bill Clinton and Jimmy Carter addressed a crowd at the steps of the Lincoln Memorial. Also present were Caroline Kennedy and Lynda Bird Johnson Robb, the daughter of President Lyndon B. Johnson. Other participants included the parents of Trayvon Martin, Oprah Winfrey and Forest Whitaker. 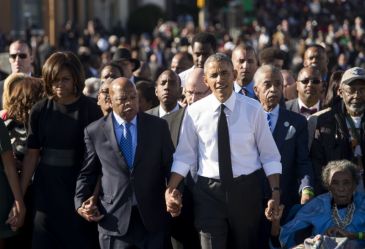 Perhaps Mr. Lewis’ most notable moment came in 1965 when he helped organize the now-famous voting rights march from Selma to Montgomery, Alabama, and was among 600 demonstrators attacked by police. This day became known as Bloody Sunday, and 58 people were taken to a local hospital, including Mr. Lewis, who suffered a fractured skull. 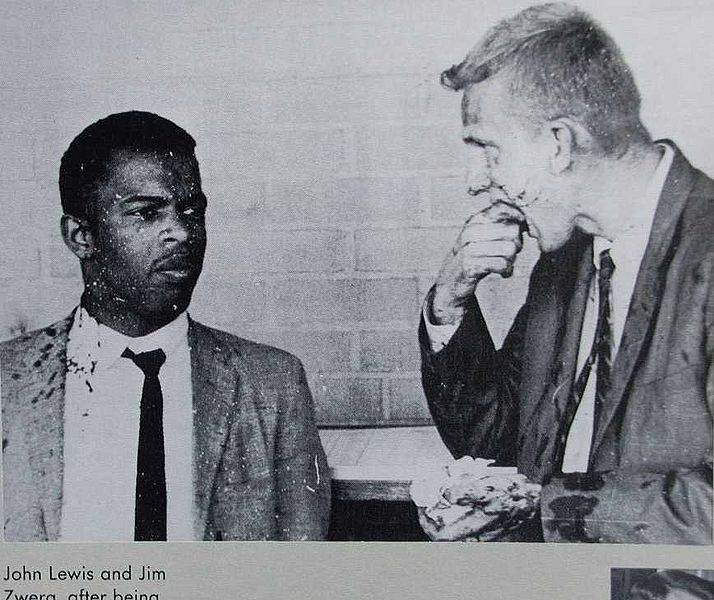 John Lewis won the House seat for Georgia’s 5th Congressional District in 1986.  He has since been re-elected 15 times, and has dropped below 70 percent of the vote only once. He is one of the most liberal members of the House, and one of the most liberal congressmen ever to represent a district in the Deep South. On May 21, 2006, The Atlanta Journal-Constitution said Lewis was the “only former major civil rights leader who extended his fight for human rights and racial reconciliation to the halls of Congress.” In the same article, they referred to Mr. Lewis as the ‘conscience of Congress’.

Though now 77 years old, Lewis’ passion for justice has not dimmed.  In June 2016, he staged a sit-in demanding House Speaker Paul Ryan allow a vote on gun-safety legislation in the aftermath of the Pulse nightclub shooting. Speaker pro tempore Daniel Webster ordered the House into recess, but Democrats refused to leave the chamber for nearly 26 hours. He is no fan of Donald Trump, having compared him to George Wallace at one point during the campaigns last year.  In a Meet The Press interview one week before Trump’s inauguration, he stated, “I don’t see the president-elect as a legitimate president. I think the Russians participated in having this man get elected, and they helped destroy the candidacy of Hillary Clinton. I don’t plan to attend the Inauguration. I think there was a conspiracy on the part of the Russians, and others, that helped him get elected. That’s not right. That’s not fair. That’s not the open, democratic process.” Trump, naturally, responded with ugly tweets.

There is so much more to be said about Congressman Lewis, but if you want to know more, there are many good books out there, including his own autobiography, Walking with the Wind: A Memoir of the Movement, originally published in 1998 and re-issued in paperback in 2015.

In 2011, John Lewis was awarded the Presidential Medal of Freedom by President Obama, and on January 6, 2016, it was announced that a future United States Navy underway replenishment oiler would be named USNS John Lewis. He has won so many awards that I cannot possibly list them all.

Lewis was the only living speaker from the March on Washington present on the stage during the inauguration of Barack Obama. Obama signed a commemorative photograph for Lewis with the words, “Because of you, John. Barack Obama.”

In response to his earlier tweet, one of his followers tweeted the following: Katy Otto ‏@exfkaty to tweet. “You are one of a small handful of politicians that gives me hope for this country. Thank you immensely for your service.” I second that, Ms. Otto. In my opinion, Representative John Lewis is a hero both of the past and the present, and possibly the most conscionable of the 535 members of Congress.