More than once I have bemoaned the lack of our ability in this, the Trumpian era, to have civil discourse, to discuss issues calmly, reasonably, and with mutual respect. I have a couple of friends and an occasional reader with whom an exchange of ideas without rancor is possible, but overall, I find that the divide between Democrat and Republican, Liberal and Conservative, is simply too wide and issues too fraught with emotion on both sides for meaningful conversation that might begin to build a bridge between right and left.  I’ve long wondered why, and it is one of the great questions of life about which I ponder when my head hits the pillow at night.  I think I have hit on the answer …

Our very ‘leaders’, those we have shown enough respect to support with our votes, our work to help them get elected, and our campaign contributions, are driving the wedge ever deeper between the two sides and seem to have an agenda for doing so.  Take, for example, Representative Mary Franson, a Minnesotan Republican.  A group of high school students very respectfully reached out to this woman to request a meeting in order to express their concerns and give her an opportunity to explain her stances to them.  Here is how it went down …

“We’ve made some calls to your office, and haven’t recieved [sic] a response, but as politically active, community centered students we’d love to have a meeting with you soon to address our concerns, and have a respectful productive talk.”

The group went on to propose a meeting at Franson’s official legislative office.

“I don’t meet with partisan groups in my office — besides, isn’t your group actively campaigning against me? One of your members is soliciting funds for my opponent.”

“Just because we are of different parties doesn’t mean we shouldn’t meet and talk out our differences. We actually think that’s necessary, regardless of what campaign some of our members are on! We are constituents who have concerns.”

“AAHS Dems is a partisan group. Thanks for playing.” 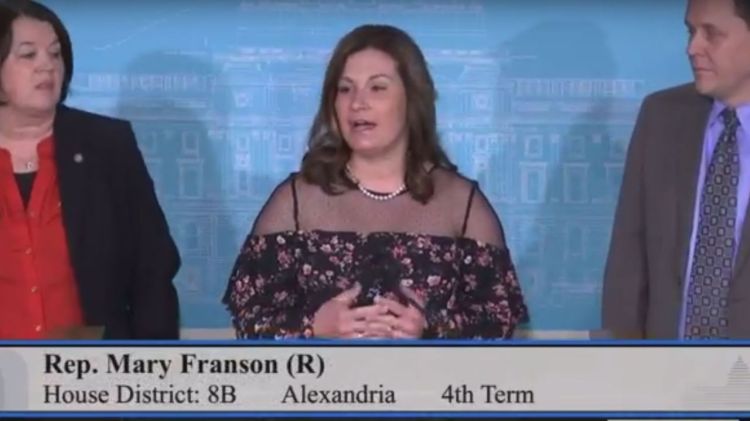 Is it the case, then, that our elected officials believe they represent only the ones who voted for them?  In my book, this is unconscionable behavior for more reasons than one.  First is the obvious, that while I may not have voted for a specific public servant, as a taxpayer, I am still paying his/her salary, therefore I am still his/her employer.  They represent all of the people, not only the ones who voted them into office! Second, how are we to ever understand the reason behind the choices and decisions of our elected representatives if they refuse to speak to us?  There is little benefit to speaking only to those who already agree with them.

Apparently I am not alone in my thinking, as Franson came under intense criticism for her treatment of the student group.  Franson shut down her official Twitter account over the weekend and claimed there was some legal reason that she was unable to meet with the group, as they are minors and it would appear to be ‘bullying’. But the founder of the student group, Jack Ballou, disputes any such notion:

“I was in the high school page program at the state House and I was able to meet with her one on one, and I was a minor back then. We’re still constituents and I’m not sure what legal issue would arise.”

Since then, Franson has blocked every member of the high school group from her Twitter account! The bottom line, it would appear, is that Franson simply does not wish to be called to answer the questions, to be forced to account for her actions as an elected official.  This is a blow to the democratic process in no uncertain terms.  And it certainly sends the wrong message to these young students who are becoming politically aware and who are trying to understand, trying to take their place in the process as informed and involved citizens.

Increasingly this year, members of Congress have been unwilling to hold their usual Town Hall meetings when they return to their home states, and there are other reports of those who have refused to meet with citizens’ groups.  They are hearing the voices of only those who agree with them, and as long as they continue receiving their pats on the head from Trump and from their mega-donors, they are content.

Town Hall meetings are the people’s opportunity to meet with their elected representatives, to ask questions, and to make their voices heard.  Yet in August, The Washington Post reported that less than a third of representatives held the traditional meetings during their month-long break.  With so much unpopular legislation in the works, wouldn’t it have made sense for them to reach out to us, to try to explain why they were voting as they were, and to listen to our concerns? Instead, they are operating in a bubble that isolates them from the voices of the very people they have sworn to represent.

Why do our elected representatives not wish to have a two-way dialogue with us?  They have voted to strip us of affordable healthcare, to bring about the ruination of our environment, and to increase our taxes while reducing our benefits, in order to cut taxes on the wealthy.  Surely they are aware that We The People are not happy, and apparently they do not wish to discuss it with us.  Could it be they feel guilty, or do they simply believe that they should not be held accountable to the very people who elected them, who gave them their jobs?

This is not the way a democracy works, or at least not the way it is supposed to work.  We write letters and emails, we call and leave messages, but there is no two-way dialogue.  In fact, we do not know whether our letters were read, our voice mails heard. I ask you, readers, how do we force our way through their bubble … and do so civilly, without violence?  Truly, I do not know the answer, but I do know that those who will not even speak to us and listen to us in return should not be re-elected next year, for they are not doing their jobs, they are not representing We The People.

19 thoughts on “The Congressional Bubble …”