When I wrote a post yesterday about two of the Sandy Hook families suing Alex Jones for the damage his 5-year-long conspiracy theory had done in the wake of the deaths of their children, I simply took for granted that everyone knew of Alex and his long, sordid history of conspiracy theories.  So, I was caught off guard when several people commented that they had either never heard of Jones, or had only a vague idea who he is.  Perhaps I should have made him Idiot of the Week, but I try to save that honour for people who are simply idiots, and not taint it with the face of evil.  Long story short, I decided to do a brief post summarizing some of his more heinous episodes.  There are video clips out there … you can find them easily enough, but I will not give him the courtesy of including any of his clips on this blog. 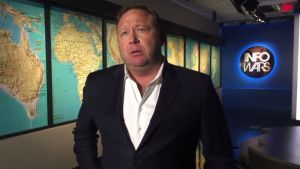 Alex Jones is most famous for his website/media outlet, InfoWars, his platform for his wide-ranging variety of conspiracy theories and fake news.  The Southern Poverty Law Center describes him as “the most prolific conspiracy theorist in contemporary America”, a title which he has said he is proud of.  Jones briefly attended college at Austin Community College, but dropped out soon after starting.  He got an early start in the conspiracy business … as early as 1996 he proposed his first one, that the 1995 bombing of the Alfred P. Murrah Federal Building in Oklahoma City, perpetrated by Timothy McVeigh and Terry Nichols, was a plot by the U.S. government in order to put down a growing states’ rights movement.

“Well I’ve been warning you about it for at least five years. All terrorism that we’ve looked at from the World Trade Center to Oklahoma City to Waco has been government actions. They need this as a pretext to bring you and your family martial law. They’re either using provocateur Arabs and allowing them to do it or this is full complicity with the federal government. The evidence is overwhelming.”

He later added that he had “smoking gun evidence” that Osama bin Laden was “a CIA asset” and “a CIA hireling doing his job” for the government.

“I went on the air and said, ‘Those were controlled demolitions. You just watched the government blow up the World Trade Center.’ I lost 70 percent of my affiliates that day. Station managers asked me, ‘Do you want to be on this crusade going nowhere, or do you want to be a star?’ I’m proud I never compromised.”

“In summation, it’s important to note that we only covered a tiny portion of the facts and evidence that clearly shows that 9/11 was an inside job. Number one, the official story of 9/11 has been completely disproven. At every point we’ve caught them lying, manufacturing evidence or covering up evidence. From high-level government inside sources and publicly available facts, we now have a very clear picture of how 9/11 was carried out.

Number one, we know that the men who were on board the aircraft who were supposedly the hijackers had their houses, cars, credit cards paid for by the U.S. government. They were in truth agents taking part in drills and nothing more. Supposed computer malfunctions at American and United [Airlines] ensured that all four planes only had 20 percent occupancy on board on a day when flights on the East Coast were an average of 80 percent full. Once the decoys, known as hijackers, were on board the planes, a gas was released knocking out the occupants of the aircraft. Then a small criminal group in control of remote control systems patented for over 20 years took control of the aircraft and flew them into the World Trade Centers and Pentagon. The CIA controlled drills that morning, confused NORAD for over an hour until it was almost too late for them to shoot down the hijacked planes. I said almost too late. When they did find out, Dick Cheney wouldn’t let the planes fly over 350 miles an hour so three of the aircraft were able to hit their targets. The fourth wasn’t able to because our sources in the Pentagon have told us generals didn’t follow their orders and had Flight 93 shot down. If it would have hit its target, the capital, the government would have been completely decapitated and the president could have declared total martial law.

The list goes on and on.  Most recently, of course, he targeted the Parkland, Florida mass school shooting and its survivors.  Of Parkland student David Hogg, Jones said he and his activist classmates were “crisis actors,” or paid actors who pretend to be victims of a tragedy to advocate for gun control.

But beyond the conspiracy theories, there are other acts of evil attributable to Jones:

All of this is only a partial list of the sheer hate, bigotry, and ignorance this man spews on a daily basis, but I think you have a pretty clear picture now of the evil that is Alex Jones.  And the really scary part?  People believe his garbage and act on it.  And finally, why does he do it? 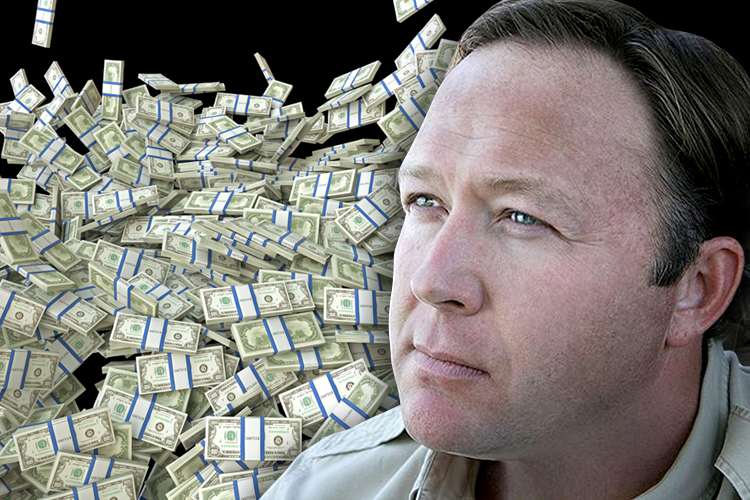 Money, plain and simple.  The InfoWars website receives approximately 10 million monthly visits, making it more visited than some mainstream news websites such as The Economist and Newsweek.  10 million viewers = 10 million potential customers for the junk he peddles.  Jones sells videos, books, T-shirts, dietary supplements, and even subscriptions videos. In 2013 alone, Alex Jones was estimated to be making $10 million/year from all of his merchandising sales.

And if you aren’t already disgusted enough, in February, two of Jones’ employees accused him of anti-Semitism and sexual harassment.  And now, though you do not know all there is to know about Alex Jones, you know enough to understand that his is indeed … The Face of Evil.