Today, the National Football League (NFL) took it upon itself to slash the 1st Amendment of the U.S. Constitution.  The owners implemented a new rule that teams and therefore players will be fined if they take a knee on the field during the national anthem.  Now, they are allowed to remain off the field during the playing of the anthem, but they cannot show their protest as Colin Kaepernick did in August 2016.  Washington Post columnist EJ Dionne said it well …

Commissioner Roger Goodell had this to say …

“The policy adopted today was approved in concert with the NFL’s ongoing commitment to local communities and our country — one that is extraordinary in its scope, resources, and alignment with our players. We are dedicated to continuing our collaboration with players to advance the goals of justice and fairness in all corners of our society.

The efforts by many of our players sparked awareness and action around issues of social justice that must be addressed. The platform that we have created together is certainly unique in professional sports and quite likely in American business. We are honored to work with our players to drive progress.

It was unfortunate that on-field protests created a false perception among many that thousands of NFL players were unpatriotic. This is not and was never the case.

This season, all league and team personnel shall stand and show respect for the flag and the anthem. Personnel who choose not to stand for the anthem may stay in the locker room until after the anthem has been performed.

We believe today’s decision will keep our focus on the game and the extraordinary athletes who play it — and on our fans who enjoy it.”

People of conscience who are fortunate enough to have a wide platform want to use that voice to rally against injustice, and they will be fined if they do so.  What’s wrong with this picture?  How did we get so out of sync here?

Patriotism?  Loyalty to country?  The flag is a piece of cloth and the anthem is a song.  Nothing more.  They are symbols, but symbols of what, exactly?  What is patriotism?  Does patriotism require that we sit down and shut up when we would speak out against an unarmed black man being killed by a cop for no reason other than that he was black?  Does being loyal to our country mean that we cannot speak out when people are being discriminated against because they are gay?  If that’s what patriotism and loyalty mean, count me out!

“There will be no club fines or suspensions or any sort of repercussions. If the team gets fined, that’s just something I’ll have to bear.”

Mike Pence, a known bigot and Trump sycophant, tweeted this 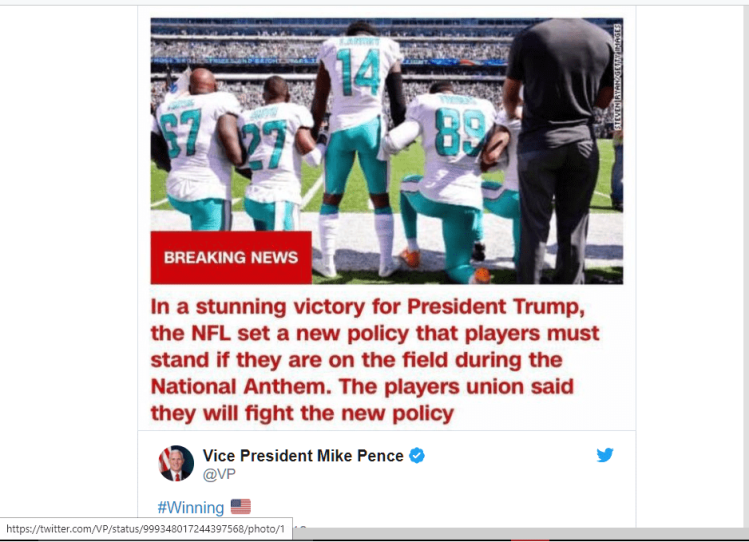 Stunning. Victory. For. Trump. That, folks, is what this is all about. If Trump speaks out against the NFL, they are afraid they will lose fans and thus lose some of those billions they rake in every season. Gotta keep the madman at the helm happy.

There may be some hope for a reversal, as the NFL and the team owners failed to consult with the players union.  The NFL Players Association (NFLPA) issued the following statement:

“The NFL chose to not consult the union in the development of this new ‘policy,’ ” the NFLPA said in a statement. “NFL players have shown their patriotism through their social activism, their community service, in support of our military and law enforcement and yes, through their protests to raise awareness about the issues they care about.

The vote by NFL club CEOs today contradicts the statements made to our player leadership by Commissioner Roger Goodell and the Chairman of the NFL’s Management Council John Mara about the principles, values and patriotism of our League.

Our union will review the new ‘policy’ and challenge any aspect of it that is inconsistent with the collective bargaining agreement.”

I hope they find the entire policy to be inconsistent.  This is a slap in the face to the 1st amendment, to the right of free speech, the right to protest.  Football players cannot take a knee, but white supremacists, neo-Nazis and the KKK can shut down entire cities and create an atmosphere of chaos and violence?  Trump denigrates the football players for a peaceful, calm, silent protest, while he calls the violent bigots and racists from the Charlottesville rally ‘very fine people’.

Think about this one for a while, folks.  Trump is cherry-picking the U.S. Constitution.  He likes to always be “the winner”.  And who, then, is the loser?  We The People.