“I think ‘immediately’ is kind of open to interpretation.”

Wow.  I always thought ‘immediately’ had rather a sense of urgency behind it, like “RIGHT NOW”! I wonder if it lends itself to interpretation for us all, or only for those in positions of power? 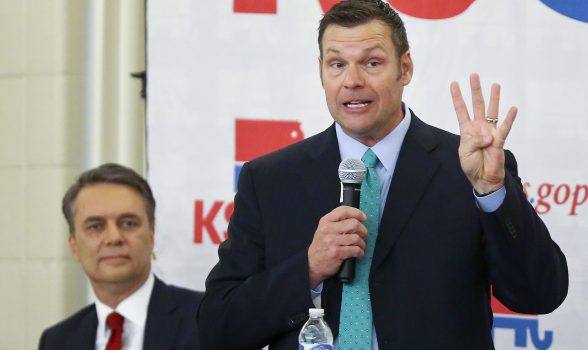 You remember ol’ Kris Kobach, right?  Kansas Secretary of State … he’s the one who swore (wrongly, as it turned out) that there was widespread voter fraud in the 2016 election, called for voter ID laws, and also a registry of all Muslims in the country.  An investigation of the ‘voter fraud’ he claimed in his state (Kansas) netted nine convictions, most elderly white republican males who misunderstood and thought they could vote in two venues.  He was the Vice-Chairman of Trump’s failed Commission on Election Integrity, which lasted only a few months before being disbanded.  That, however, hasn’t stopped ol’ Kobach who is still claiming to have ‘proof’ of widespread voter fraud, though he has never produced said proof, and is working very hard to disenfranchise as many voters as possible.

Kobach got his hand slapped by a federal judge last Tuesday.  His restrictive voter ID laws in Kansas include the requirement to provide a birth certificate or other ‘proof of citizenship’, far more than is required by most states.  Judge Julie Robinson not only struck down the proof of citizenship law in Kansas, but also ordered Kobach to attend six hours of continuing legal education classes!!!  The judge said, in part …

“The court finds no credible evidence that a substantial number of noncitizens registered to vote. Instead, the law has acted as a deterrent to registration and voting for substantially more eligible Kansans than it has prevented ineligible voters from registering to vote. This trial was his opportunity to produce credible evidence of that iceberg, but he failed to do so. The court will not rely on extrapolated numbers from tiny sample sizes and otherwise flawed data.”

But then on Thursday, it was reported that county clerks throughout the state had been ordered to continue demanding proof-of-citizenship from anyone registering to vote.  Kobach’s spokesperson, Danedri Herbert, when questioned said that the judge was not clear in her directive …

“I think ‘immediately’ is kind of open to interpretation.”

Seriously???  No, ma’am, I am pretty sure the judge meant to suspend the requirement right then and there.

Since the law went into effect in 2013, thousands of voters have been denied the right to vote in Kansas because they could not produce a birth certificate.  Many Indigenous People living in remote villages were having a hard enough time producing a photo ID, for most do not have driver’s licenses.  And to add insult to injury, thousands of provisional ballots (estimated 8,864) in the 2016 election were thrown away uncounted because election officials said that there was no record that those residents were registered voters.  Excuse me?

Personally, I hope Mr. Kobach ends up keeping Mr. Manafort company in prison for his blatant disregard of the law.  There are many, many challenges to voters in the upcoming mid-term elections:  gerrymandering, unchecked Russian interference, overly-strict voter ID laws, limited polling hours and polling places.  Most of these challenges are designed to keep the poor and minorities from being able to vote.  Poor and minorities have every reason to vote for a democrat, given the treatment they have received and are receiving at the hands of the republicans.  Does something smell funny here?

8 thoughts on “When Is ‘Immediately’?”