A Category 4 hurricane, Hurricane Michael, has hit the Florida coast, killing at least 6 people, leaving 1.1 million homes and businesses without electricity and damaging thousands of homes.  A journalist for the Washington Post, Jamal Khashoggi, is missing and word is that he may have been murdered in Turkey in a hit ordered by Trump’s friend, Saudi Prince Khalid bin Salman.  Global markets have plunged for two consecutive days, leaving the Dow some 1,400 points lower than at the close on Tuesday.  Immigrant children are, despite a court order, still separated from their parents and being held in detention centers.  The IPCC report issued earlier this week is an eye-opener and the U.S.’ policy of ignoring climate change needs to be seriously re-considered.

Those are just a few of the things that the ‘man’ sitting in the Oval Office must be very concerned about, must be meeting with advisors and asking for more information about, yes? 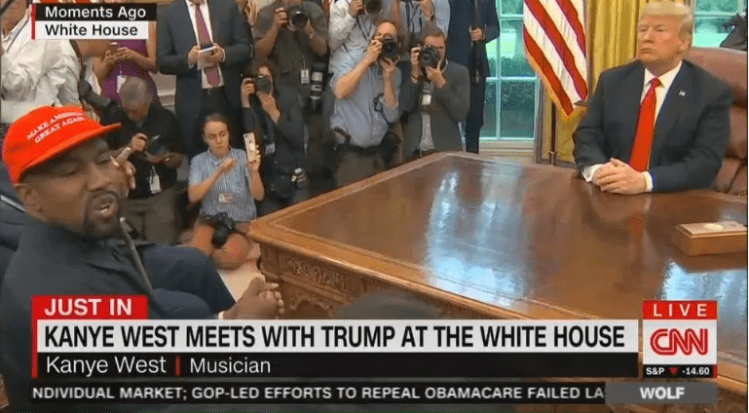 Donald Trump’s big achievement, if one chooses to call it such, yesterday was a meeting with a rapper, Kanye West, where the two discussed such important issues as West’s sleep deprivation, street gangs, and ‘male energy’, whatever the heck that is.  Apparently West went off on a monologue that lasted nearly ten minutes, and at the end, he and Trump declared their mutual love for each other (won’t Kim Jong-un be jealous?).  Here are a few snippets …

I think you’ve heard/read enough to realize that … this was probably among the least important, least relevant people that Trump could have spent time with yesterday, and why he did is beyond me.  Oh … wait … no, I get it.  It was the praise thing.  Kanye West is a huge Trump fan (though he didn’t vote for him – didn’t vote at all, actually) and they had a few moments of mutual admiration.

Not a fan of rap music, I know almost nothing of Kanye West other than I knew he was/is a rap singer and I knew he was/is married to one of those Kardashian bimbos.  I heard enough, however, in this little impromptu speech to know that he is definitely not somebody I admire, so you might imagine my horror when somewhere near the end of his little soliloquy he noted that he might consider a run for the presidency, but not until 2024 because …

“Trump is on his hero’s journey right now. He might not have thought he’d have a crazy [expletive] like him.  I love this guy right here.”

Impossible, right?  Yeah, well, that’s what I said in June 2015 when Trump announced his candidacy, too, and look how well that worked out.  Meanwhile, perhaps Trump can give him a cabinet position … or perhaps he might even replace Nikki Haley as Ambassador to the United Nations!

If you’ve the stomach for it, you can read the full annotated transcript or watch the entire video of the Kanye & Donnie Show here.

19 thoughts on “The Kanye & Donnie Show”