After the Parkland school shooting last February, we saw many of our young people step up to the plate and become … well, the adults in the room, quite honestly.  They declared they had enough of adults being so stupidly in love with their guns that they were willing to sacrifice the very lives of these young people, and in nearly the blink of an eye, these young people became activists for meaningful gun regulations.

On Monday night, our dear friend Colette sent me an email with a suggestion that I look into another young activist fighting for a cause that we should all be fighting for.  Her name is Greta Thunberg, she is 15-years-old and lives in Sweden.  Greta is, as the Parkland kids were, being the adult in the room.  Her cause?  Climate change.

“Since our leaders are behaving like children, we will have to take the responsibility they should have taken long ago.”

It takes a lot of courage for a teenage girl to make such a statement, and she is spot on! 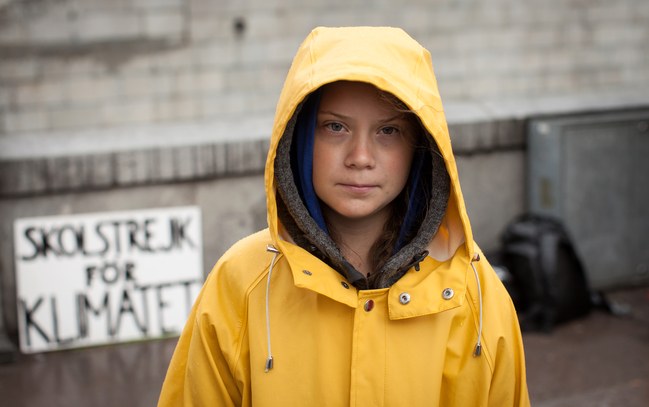 Greta is the daughter of Svante Thunberg, an actor, and Malena Ernman, a well-known opera singer, both people of conscience, as you will see.  Greta developed her special interest in climate change when she was nine years old and in the third grade.  As she tells it …

“They were always talking about how we should turn off lights, save water, not throw out food. I asked why and they explained about climate change. And I thought this was very strange. If humans could really change the climate, everyone would be talking about it and people wouldn’t be talking about anything else. But this wasn’t happening.”

Nine years old, and she had better sense than many world leaders today.  She began researching climate change and has stayed on the topic for six years. She has stopped eating meat and buying anything that is not absolutely necessary. In 2015, she stopped flying on airplanes, and a year later, her mother followed suit, giving up an international performing career. The family has installed solar batteries and has started growing their own vegetables on an allotment outside the city.

All of that would be enough, in my book, to dub her a “good person”, but it is barely even the tip of the iceberg.  Fast forward to mid-August when Greta Thunberg went on strike.  That’s right … she went on strike, refusing to attend school until Sweden’s Parliamentary election on September 9th.  Every day, Greta sat quietly on the cobblestones outside parliament in central Stockholm, handing out leaflets that declare: “I am doing this because you adults are shitting on my future.”

When people tell her she should be at school, she points to the textbooks in her satchel …

“I have my books here. But also, I am thinking: what am I missing? What am I going to learn in school? Facts don’t matter anymore, politicians aren’t listening to the scientists, so why should I learn?”

As word of Greta’s protest spread, so did the protest itself.  At last count, more than 20,000 students around the world have now joined her. The school strikes have spread to at least 270 towns and cities in countries across the world, including Australia, the United Kingdom, Belgium, the US and Japan. Greta is amazed by the rapid spread of school strikes for climate around the world: “It proves you are never too small to make a difference.”

Greta has since returned to school four days a week, but on Fridays she pursues that which is closest to her heart these days, her activism, her attempt to wake us all up, to help us save ourselves.  Every Friday, she and others sit outside Parliament to raise awareness amongst legislators and passersby.  I may have forgotten to mention that Greta is autistic and has both ADHD (Attention Deficit Hyperactivity Disorder) and Asperger’s Syndrome, all of which makes it very difficult for her to speak to other people, yet look at what she has done in spite of her obstacles!

This Monday was the opening of COP24, the 24th Conference of the Parties to the United Nations Framework Convention on Climate Change being held for twelve days in Katowice, Poland.  Greta Thunberg held a press conference.  The sound quality is poor on the video, and I tried to find a better one, but no luck, so instead I am providing a transcript of her speech. 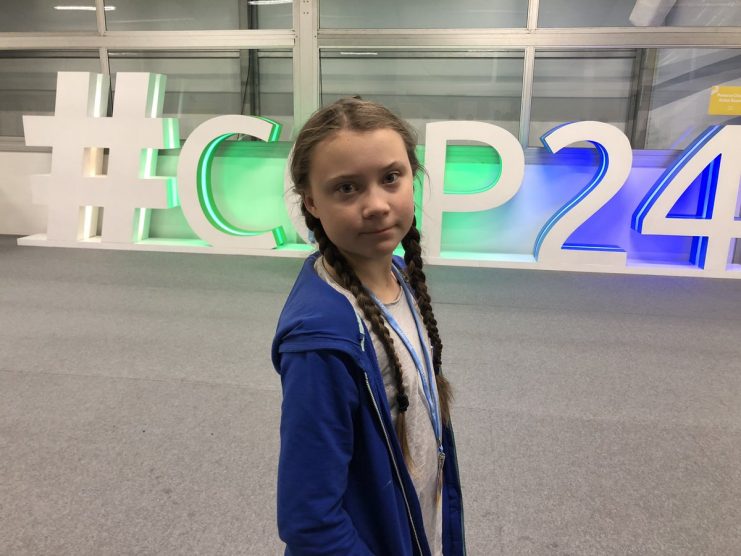 For 25 years countless of people have stood in front of the United Nations climate conferences, asking our nations’ leaders to stop the emissions. But, clearly this has not worked since the emissions just continue to rise.

So, I will not ask them anything.

Instead I will ask the media to start treating the crisis as a crisis.

Instead I will ask the people around the world to realize that our political leaders have failed us.

Because we are facing an existential threat and there is no time to continue down this road of madness.

Rich countries like Sweden need to start reducing emissions by at least 15% every year to reach the 2 degree warming target. You would think the media and everyone of our leaders would be talking about nothing else – but no one ever even mentions it.

Nor does hardly anyone ever talk about that we are in the midst of the sixth mass extinction, with up to 200 species going extinct every single day.

Furthermore does no one ever speak about the aspect of equity clearly stated everywhere in the Paris agreement, which is absolutely necessary to make it work on a global scale. That means that rich countries like mine need to get down to zero emissions, within 6–12 years with today’s emission speed, so that people in poorer countries can heighten their standard of living by building some of the infrastructure that we have already built. Such as hospitals, electricity, and clean drinking water.

Because how can we expect countries like India, Colombia or Nigeria to care about the climate crisis if we, who already have everything, don’t care even a second about our actual commitments to the Paris agreement?

So when school started in August this year I sat myself down on the ground outside the Swedish parliament. I school striked for the climate.

And why should I be studying for a future that soon may be no more, when no one is doing anything to save that future? And what is the point of learning facts when the most important facts clearly mean nothing to our society?

Today we use 100 million barrels of oil every single day. There are no politics to change that. There are no rules to keep that oil in the ground.

So, we can’t save the world by playing by the rules. Because the rules have to be changed.

So, we have not come here to beg the world leaders to care for our future. They have ignored us in the past and they will ignore us again.

We have come here to let them know that change is coming whether they like it or not. The people will rise to the challenge. And since our leaders are behaving like children, we will have to take the responsibility they should have taken long ago.

This young lady has courage beyond what I could have even begun to imagine when I was her age — or even now, for that matter!  She is an inspiration to so many others who have joined her in the good fight.  Every Wednesday I write this post about ‘Good People Doing Good Things’ … Greta Thunberg is by every measure a good person, and she is doing good things, not just for a few people, but for every living, breathing organism on this planet.  She is doing what our leaders haven’t the courage to do.  She is doing what none of us have the courage to do.  She is trying to save our lives.  I hope that the people with the money and more importantly, the power to do something listen to Greta and her words of wisdom, for all our lives depend on it.  If future generations stand a chance, it will be because of young people of conscience like Greta Thunberg.  Thank you, Greta.

Many thanks to Colette for this suggestion, and also for a number of emails containing links to information and video!  There is much more I could write about Greta Thunberg, but in the interest of time and space, I have included a few links below, for those who would like to know more.

Greta Thunberg: “Sweden is not a Role Model”

Greta Thunberg speaks in Katowice: ”Our leaders behave like children”