Last night when I began working on my ‘good people’ post, I intended to write about 3 or 4 people, as I often do, and I picked one with which to begin.  But, before long I was up to nearly 700 words and still had more to say about this remarkable duo … a boy and his dad … 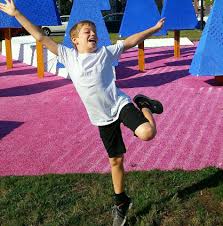 Today, please allow me to introduce to you 12-year-old Liam Hannon of Cambridge, Massachusetts.  Liam’s dad typically sent him to camp for a portion of each summer, but in 2017, when Liam was just ten, he informed his dad that he didn’t want to go to camp that year.  Dad said okay but insisted that Liam find something productive and positive to keep himself busy through the summer.

That first week of summer vacation, Liam and his dad found an online treasure hunt game called Brain Chase, where Liam chose three topics to focus on, one of which was ‘service’.  The game challenged Liam to find some way, some project to give back to his community.  Liam thought about the homeless people he saw every day right outside his building, and he had an idea.  The idea was to make … sandwiches!  Sandwiches to pass out to the people who needed them most.  And thus was Liam’s Lunches of Love born.

In the first week, Liam loaded up a wagon and handed out 20 sandwiches with his dad’s help. He went from sandwiches to complete bag lunches, upgraded the wagon to a hand-cart, and to date has served up more than 2,000 bag lunches to homeless people in his neighborhood.  He doesn’t just make the lunches (with some help from dad), but on each and every lunch bag, he writes a handwritten message, often accompanied by an encouraging little bit of artwork.

Liam hopes to someday expand his philanthropy to include animal rescue.  A story his dad tells of one incident furthers our faith in Liam’s good heart …

His father remembers Liam’s first animal rescue: a bucket of 15 baitfish. Father and son had gone fishing. Liam watched his dad jab one small fish with a fishing hook. The boy held the bucket against his chest.  “I heard him tell the fish, ‘Don’t worry. It’s OK. I’m going to talk to him,’” Scott said.  Liam persuaded his father to throw every single baitfish back into the water, including the one on the hook so he could ‘be with his friends.’ “He’s just a wise soul for his age,” Scott said.

Now, Liam obviously has a huge heart and is a ‘good people’, but I think his dad, Scott, has to get some of the credit here, too.  Scott doesn’t just talk the talk, but walks the walk, and Liam has grown up seeing the examples set by his dad.

“One time, Liam said, ‘Dad, did you just tell that lady she didn’t have to pay you?’ And I said, ‘Yes, she’s 90 and lives on her own and has no one to help. That $80 means nothing to me.’ He has learned like that, but he’s always been a very empathetic kid.”

Scott is a single parent, working at a mid-level job and lives in a rent-controlled building, so needless to say, there came a point early on in this venture where they needed help to pay for the groceries for the lunches Liam was handing out.

“That first week, we made 20 lunches. That was going to be it, but then Liam said, ‘Dad, can we do this again? I like doing this.’…So we kept doing it, and each week it grew a little bit more.”

So, they started a GoFundMe.   Over the weeks, donations poured in to help Liam’s Lunches of Love, and local grocery stores contributed meals, too. Friends and neighbors also volunteered their time to hand out bags, which freed Liam and Scott up to spend more time with each recipient and get to know them. And that experience has opened their eyes.

“Liam has learned a lot about the difference between what a real homeless person is like versus the idea he had in his head just from seeing people on the street. He realized they’re a lot different than he thought they were, and he’s grown up a little because of it.”

Liam and his Liam’s Lunches of Love have received national recognition from ABC News, NBC News, CBS News, the Boston Globe and others.  But the real honour came last month when Liam was one of five young people showcased on CNN’s “Young Wonders: A CNN Heroes Special” hosted by Anderson Cooper.  Take a look …

The five were also honoured the next night on “CNN Heroes: An All-Star Tribute”.  As Anderson Cooper said at that event …

“The next generation reminds us of the unwavering foundation that really connects us all — incredible acts of kindness, unconditional love and the promise of a better tomorrow.”

I couldn’t have said it better myself.  Hats off and two thumbs up to Liam and his dad Scott … these are the people who remind us what humanity is really about, don’t you think?

For more about Liam, his dad and this project, be sure to check out the Liam’s Lunches of Love website.