Once again, I take a short detour from my normal ‘good people’ post to honour someone who died 16 years ago today, but throughout his life was most definitely a shining example of a ‘good people’.

I’m fairly certain that I don’t need to introduce Mr. Rogers to those of you in the U.S., who have almost certainly seen Mr. Rogers on his children’s television show, Mr. Rogers’ Neighborhood.  I find no evidence that it was aired across the pond, however, so Mr. Rogers may not be familiar to our European friends.

Now, just being the host of a kids’ television show doesn’t automatically qualify one as a good person, but Fred Rogers went well beyond the call to entertain children, but also gave them something more, a sense of self-worth as well as a sense of security.

During the 33-year tenure of Mr. Rogers’ Neighborhood, he tackled a wide variety of topics, addressing some of the fears and anxieties that most children have, such as the first day of school, a trip to the hospital, death, divorce, AIDS, and war. He felt that children were far too intuitive to accept the normal response of adults to children, “don’t worry about it”, and that kids would worry anyway, so it was better to talk about these things, to explain them.

His calm demeanor was reassuring, and it was the real Fred Rogers.  He refused to change his persona on camera compared to how he acted off camera, saying …

“One of the greatest gifts you can give anybody is the gift of your honest self. I also believe that kids can spot a phony a mile away.”

And he did just that.  He tackled the tough subjects that sometimes parents are afraid to talk to their children about.  Shortly after his show began in 1968, Robert F. Kennedy was assassinated.  Mr. Rogers took on the topic in a manner that few could, by explaining that it’s okay to be sad when something like this happens, and that different people react differently to such sadness.  It is one of his most memorable and most-watched clips.

On another notable episode, Rogers soaked his feet alongside Officer Clemmons, who was African-American, in a kiddie pool on a hot day. The scene was a subtle symbolic message of inclusion during a time when racial segregation in the United States was widespread.

In a 1981 segment aired in Season 11, Episode 4, Rogers met a young quadriplegic boy, Jeff Erlanger, who showed how his electric wheelchair worked and explained why he needed it. Erlanger and Rogers both sang a duet of the song “It’s You I Like.”  Years later, when Rogers was inducted into the Television Hall of Fame in 1999, Erlanger was a surprise guest to introduce Rogers. Rogers “leaped” out of his seat and straight onto the stage when Erlanger appeared.

He ended each show by saying …

“You’ve made this day a special day, by just your being you. There’s no person in the whole world like you; and I like you just the way you are.”

Fred Rogers was a religious man, an ordained a minister of the United Presbyterian Church, but he left religion out of his show, saying he preferred his show to be inclusive, not to let any child feel left out or unwanted.  Rather, his theme was ‘kindness’, pure and simple.   Or, as many have defined it, ‘radical kindness’. 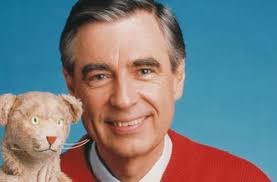 Mr. Rogers did more than talk to kids each day, he advocated for them.  In 1969, Rogers appeared before the United States Senate Subcommittee on Communications. His goal was to support funding for PBS and the Corporation for Public Broadcasting, in response to proposed budget cuts. In about six minutes of testimony, Rogers spoke of the need for social and emotional education that public television provided. He argued that alternative television programming like his Neighborhood helped encourage children to become happy and productive citizens, sometimes opposing less positive messages in the media and in popular culture. He even recited the lyrics to one of his songs.

The chairman of the subcommittee, John O. Pastore, was not familiar with Rogers’ work and was sometimes described as impatient. However, he reported that the testimony had given him goosebumps, and declared, “I think it’s wonderful. Looks like you just earned the $20 million.” The subsequent congressional appropriation, for 1971, increased PBS funding from $9 million to $22 million.

Years later, Mr. Rogers also swayed the Supreme Court to allow VCR’s to record TV shows from home. It was a cantankerous debate at the time, but his argument was that recording a program like his allowed working parents to sit down with their children and watch shows as a family.

Fred Rogers died on this date in 2003 of stomach cancer, but his memory lives on through the many children, now adults, who were touched by his words and acts of kindness for more than three decades.  He won numerous awards, including four daytime Emmys, a 1997 Lifetime Achievement award from the National Academy of Television Arts and Sciences and, in 2002, the Presidential Medal of Freedom. In 1999, he was inducted into the Television Hall of Fame.

As I said in the beginning, I don’t typically honour people in my ‘good people’ posts posthumously, though I did so once before when I featured Mike Ilitch  two years ago.  But our friend Ellen made this as a suggestion a few days ago, and as the anniversary of his death fell on a Wednesday, it seemed somehow right, for Fred Rogers was indeed a “good people”.