Robert Mueller’s report clearly shows a number of times that Don Trump attempted to obstruct justice, such as telling his White House counsel Don McGahn to fire Mueller.  There are at least 10 such instances documented in the report.  And yet, Trump and his minions claim the report exonerates him.  It does not, but setting that aside for the moment, today he is obstructing justice yet again!  He is digging his hole deeper and deeper, and I sincerely hope he falls into it very soon.

First, it was announced yesterday that Trump and his business organization are suing the chairman of the House Oversight Committee, Elijah Cummings, in an attempt to block the subpoena the committee issued requesting information from Trump’s accounting firm about his financial records.  Now, this subpoena would not have been necessary if Trump had been forthcoming with his tax returns, as every other president since Reagan has done.  When one refuses to answer a question, it throws up red flags and becomes obvious one has something to hide, and it is glaringly obvious at this point that Donald Trump has a heck of a lot to hide.

Judging by the fact that Trump had been involved in some 5,000 lawsuits prior to becoming president, we should not be surprised by this latest, for suing someone seems to be his modus operandi any time things don’t go his way.  The argument in this one, however, is laughable.

“Instead of working with the President to pass bipartisan legislation that would actually benefit Americans, House Democrats are singularly obsessed with finding something they can use to damage the President politically.”

Trump’s lawyers are also seeking to block his accounting firm, Mazars USA, from providing any information to the committee.  There is small chance that Trump will win this suit, BUT … it is seen as mainly a delaying tactic, likely until he can think of something else.  Trump is wasting our money on efforts to hide his own perfidy.  Plus … he is challenging the U.S. Constitution that calls for a system of checks and balances, as he asks the judicial branch to stop the legislative branch from doing their job overseeing the executive branch.  Playing both ends against the middle, so to speak.

And about those tax returns … the Internal Revenue Service missed the first deadline to turn six years’ worth of tax returns over to the House Ways and Means Committee, and the deadline was pushed back until … today, and as of this writing there is no sign of any tax returns.  More obfuscation.

Former White House personnel security director Carl Kline received a letter directing him not to show up for questioning by the House Oversight Committee.  The letter came from White House deputy counsel Michael M. Purpura and claims that the subpoena for his testimony “unconstitutionally encroaches on fundamental executive branch interests.”  Kline’s attorney said he will abide by the White House directive.

Mr. Kline’s testimony was requested as the committee is investigating the security clearances that appear to have been handed out willy-nilly on Trump’s orders, even though investigations had shown those individuals to be a security risk.  Trump’s son-in-law Jared Kushner was one of those individuals.

Every single one of the above instances are attempts on the part of Trump to obstruct justice by hook or by crook.  Obstruction of justice, by the way, IS against the law.  Imagine if you are summonsed to appear before a judge for some matter and you don’t show up.  Guess where you’ll be going?  But Trump is getting by with it because … he believes he is a king, not a president of a relatively democratic nation.  More and more, I am coming to believe that impeachment may be the only answer.  I had been of the opinion that we should wait until all these investigations were concluded, however it appears that they may not be concluded for years, as he and his lawyers continue meddling, obfuscating, interfering and obstructing the process of the investigations.

And in other news, I am distressed to read that in less than two months, on June 3rd, Trump will travel to the United Kingdom for a state visit.  The Brits do not want him there, and it is certain that he will only humiliate us in front of our UK friends.  There is no good reason for him to go … it is merely an ego trip.  Last July when he went to the UK amid many protests from the citizenry, it ended up costing the country £18 million, or about $23 million in security.  I have an idea … how about just not having security … let the chips fall where they may. 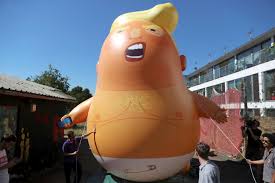 Some are predicting even more, larger protests this time … as I said, nobody wants him there.  On the fun side, however, they are getting out the Trump baby blimp and dusting it off to use again.  I read in The Guardian that they may even make a new one … a hot air balloon five times the size of the original!

And on that note, I think I am finished for now … have a great day, my friends!

83 thoughts on “Lawsuits, Obstruction, and a Blimp”