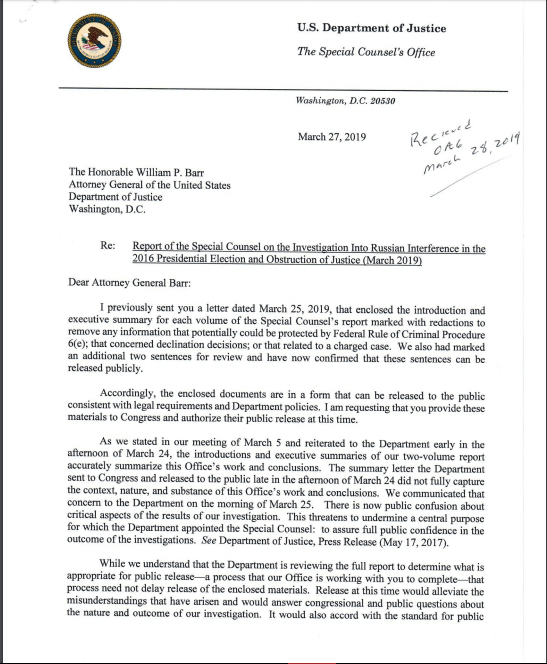 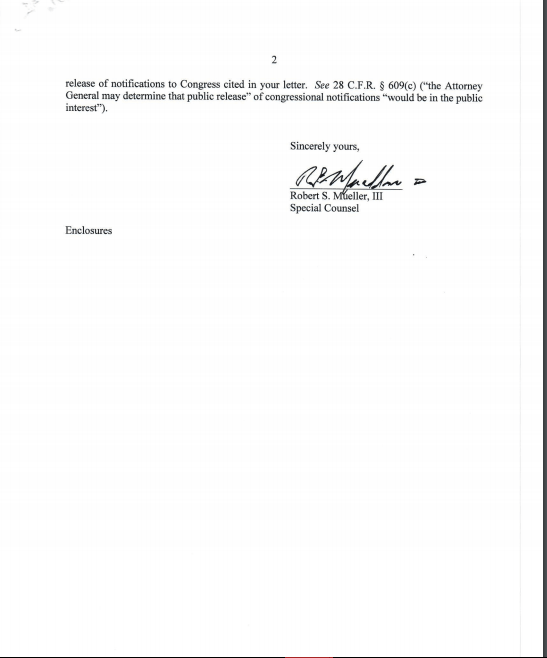 The above letter was written to Attorney General William Barr by Special Counselor Robert Mueller on March 27th, just three days after Barr presented an abbreviated 4-page “summary” of the full report.  Mr. Mueller followed up with a subsequent phone call in which he again expressed his displeasure at Barr’s handling of the report.  Robert Mueller has spent the better part of two years digging and investigating the Russian’s influence over our election, as well as the relationships between Trump, his family, and his campaign staff with the Russians who were de facto interfering with our elections.  He is much more well-versed and knowledgeable on this topic than William Barr, who has only been in his position since February 14th, less than three months, but Barr purported to know more than Mueller about what Mueller’s own report said.

Yesterday, Barr testified before the Senate Judiciary Committee, headed by Trump sycophant Lindsey Graham.  When asked about Mr. Mueller’s letter, Barr discounted it, saying he thought it was “a little snitty”, and concluded it was probably written by a staffer rather than Mueller himself.  Excuse me?  Under the circumstances, it seems to me that the letter was quite cordial. And, he called Barr in person to follow up, so that rather negates the idea that a ‘staffer’ wrote the letter.

I have heard it said numerous times over the past month that AG Barr is acting more like Trump’s personal attorney than the attorney general who took an oath to uphold the U.S. Constitution.  I would agree.

Barr attempted to blame the media for Mueller’s displeasure of his handling of the report, but as you will note, at no point did Robert Mueller even mention the media.  He tried to argue that Trump directing Don McGahn to “get rid of” Mueller did not constitute obstruction of justice.  Barr claimed that Trump never told McGahn to “fire” Mueller but rather to remove him from his position due to alleged conflicts of interest.  First, there was no conflict of interest, and second, that is splitting hairs. In May 2017, the Department of Justice made clear that Mueller had no ethical conflicts and was perfectly capable of overseeing the special counsel investigation.  It was a month later that Trump told McGahn to get rid of Mueller.

Senator Kamala Harris asked Barr one simple question:  Did anyone in the White House ask or suggest that he open an investigation into a person or people?  Easy, right?  Barr, who has a good, solid education and a Doctorate of Jurisprudence from George Washington University Law School, struggled to understand the meaning of the word ‘suggest’.  He stumbled about with that question, never actually answering it.  Now, you can make of that what you will, but … I take it as outright obfuscation, and why, unless there is something to hide, would he struggle with a simple ‘yes’ or ‘no’ question that contains the word ‘suggest’ … a word most of us knew and understood by age five?

“Special counsel [Mueller] did uncover evidence of underlying crimes here, including one that directly implicated the president. Did we learn, due to the special counsel’s investigation that Donald Trump known as “Individual 1″ in the Southern District of New York, directing hush payments as part of a criminal scheme to violate campaign finance laws. That matter was discovered by special counsel [and] referred to the [United States Attorney for the] Southern District in New York. Is that correct?”

Barr answered simply: “Yes.”  This is, by the way, a felony.

Okay, so that covers the highlights of Barr’s testimony before the Senate Judiciary Committee, though I do have more to say another time about Lindsey Graham, but that must wait.  Today, then, Barr was scheduled to testify before the House Judiciary Committee, but apparently yesterdays testimony must have given him a tummy-ache, for he is declining the ‘invitation’ to testify.  Not only that … the full un-redacted version of the Mueller report was subpoenaed with a deadline of yesterday, but it was not produced and all indications are that Barr has no intention of producing it.

Some House democrats have called to begin impeachment against Barr, but Nancy Pelosi, again the calmer head, prevailed when she suggested it would detract from the greater issue of the investigations into Trump, so they have decided to ‘give him a day or two’ to have a change of heart.  If he fails to do so, then they will seek a contempt citation against Mr. Barr.

Personally, I am of a mind that we should impeach the entire corrupt administration and start over.  Of course, my opinion is largely irrelevant, so don’t hold your breath on that one.  However, we need to step back a minute and take a look at the big picture.  There is enough factual evidence, even in the redacted version of the Mueller report that we have, to know that Donald Trump did, in fact, obstruct justice.  However, he and his trained pets in the form of Barr, Graham, and others, are continuing to obstruct justice, making the case against them stronger by the day.  How so?  By ignoring subpoenas, or in Trump’s case, suing those who have received subpoenas, tying the matter up in court and disrupting the flow of information.

Folks, what Trump, Barr and others are doing is criminal.  It is a crime against the U.S. Constitution, and it is a crime against We the People, We the Citizens, We the Taxpayers.  I am not exaggerating when I say that our very system of ‘separation of powers’, of ‘checks and balances’, of ‘rule of law’ are being trampled as never before.  If Trump & Co. get by with this, if they are allowed to impede the investigative committees, then it will have been confirmed that Trump and his cabinet members are, in fact, above the law, that the law only applies to us peons, not to them.  And you know what the next step is, if that happens?  Think about it.

44 thoughts on “Trampling The Constitution — Part I”