It occurs to me that those of us writing political blogs covering U.S. politics and the regime of Donald Trump spend more time correcting misconceptions that he creates than we spend being proactive and creative.  But so be it … we cannot let the fool on the hill get by with lies that go unchecked and with tarnishing the reputations of good people. 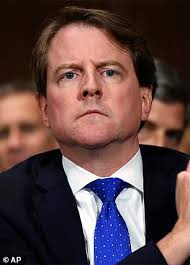 The latest, of course, is Don McGahn, former White House counsel.  According to Special Counsel Robert Mueller’s report, McGahn testified under oath that Trump had given him a directive to order Rod Rosenstein, then-Deputy Attorney General, to fire Robert Mueller based on a ‘conflict of interest’ that did not, in fact, exist.  McGahn refused, and ultimately left Trump’s employ rather than break the law.

Naturally, Trump denied that he had told McGahn to fire Mueller …

“As has been incorrectly reported by the Fake News Media, I never told then White House Counsel Don McGahn to fire Robert Mueller, even though I had the legal right to do so. If I wanted to fire Mueller, I didn’t need McGahn to do it, I could have done it myself.”

Ah yes, he could have, but that would have opened a can of worms and made him look even guiltier than he already did at that point.  Now really, folks, who are you going to believe … Trump who has told more than 10,000 documented lies since his inauguration, or McGahn who had the integrity to refuse an order and resign rather than break the law?

Then last month, the day after the redacted copy of the Mueller report was released to Congress and the public, Trump contacted McGahn and asked him to publicly declare that he doesn’t believe Trump obstructed justice.  McGahn refused Trump’s request.  Now if that doesn’t speak loud and clear that Trump is, to this day, obstructing justice, then I don’t know what it takes.  Are you listening, Mitchell McConnell???

Trump, needless to say, is in a state of rage …

“I was NOT going to fire Bob Mueller, and did not fire Bob Mueller. In fact, he was allowed to finish his Report with unprecedented help from the Trump Administration. Actually, lawyer Don McGahn had a much better chance of being fired than Mueller. Never a big fan!”

Unprecedented help from the administration?  I think not.  And if he wasn’t a fan of McGahn, why did he hire him in the first place?  More lies.  With apparently nothing better to do, Trump tweeted some 70 times on Saturday. Since he is so fond of giving everyone nicknames, I think his new moniker ought to be Tweety Twump.

McGahn is still, as of this writing, scheduled to testify before the House Judiciary Committee on May 21st, though Trump has ordered him not to.  I think that since McGahn is a private citizen, and since he has already testified before the Mueller team, that even Trump’s “executive privilege” cannot stop McGahn if he chooses to testify.  I hope that he will, I like and respect McGahn, however if he doesn’t, I hope that the committee will issue a warrant for his arrest for contempt of Congress.  Somewhere, somehow, Congress must find the chink in the armour and be allowed to do its job.

The United States celebrates Independence Day on the 4th of July each year.  The celebration commemorates the Declaration of Independence of the United States on July 4, 1776. The Continental Congress declared that the thirteen American colonies were no longer subject and subordinate to the monarch of Britain and were now united, free, and independent states.  Of course, it would take a war to make the declaration reality, but this is the date that is remembered for its significance.  In recent decades, the holiday is, for many, not much more than an excuse to picnic or grill out, drink lots of beer, and watch fireworks after dark.  Nonetheless, there is symbolic meaning to the day.

One of the most prominent events takes place in Washington, D.C., which includes fireworks on the mall.  Correction … it did.  Until King Donald Trump decided to take over the celebration and make it all about himself, rather than the people who fought for this nation’s independence back while his own ancestors were still living in Germany.

Trump has decided to move the fireworks display from its usual spot on the Mall to be closer to the Potomac River (who said it was up to him???), but that isn’t even the worst of it.  He has decided to hold a bloomin’ campaign rally from the steps of the Lincoln Memorial!  What an irony!  The man who was known as ‘Honest Abe’ … being defaced and devalued by the most dishonest president in the history of the United States.  The man who fought to free the slaves and end bigotry being smeared by the one who is “Making America Racist Again”!

This is supposed to be the people’s celebration, not Donald Trump’s.  That’s okay, though, for just as I said last year, in my heart, there is nothing to celebrate this July 4th.  Frankly, in this, the year 2019, I wish we were still a subject of the Crown.  Queen Elizabeth is a much kinder, more intelligent leader than the one we have.