As most of you know, I have been vacillating on whether the time is right for the House to begin the process to ultimately impeach Donald Trump or not.  Still today, I have mixed feelings about it … I definitely think he ought to be impeached, but it’s not just that simple.  This morning I stumbled across a piece in The Opinionated by political analyst and author Bill Press, whose work I have always respected, and his words made a lot of sense to me.  The article helped clarify my own thoughts, both pro and con.

With all due apologies, I know I’ve weighed in on the debate about impeaching Donald Trump in previous columns. The reason I take it up again is because so many Democrats still can’t decide how to proceed.

Democrats are split into two camps. Those who say it’s a mistake to start impeachment hearings because they’re bound to fail. Trump will still be in the White House because Senate Trumpers will never vote to convict him. And those who insist that — even if they’re sure to fail — Democrats must begin impeachment hearings anyway, because not doing so would in effect endorse Trump’s unacceptable presidential behavior. More than any other factor, how that issue is resolved, I believe, could determine what happens in 2020.

First, let’s be clear. Why should Donald Trump be impeached? As Elizabeth Barrett Browning famously wrote, “Let me count the ways.” He’s debased the office of the presidency. He’s told thousands of lies. He played footsie with a foreign adversary to win an election. He obstructed justice, many times. He intimidated witnesses. He ordered top aides to commit crimes. He defied congressional subpoenas.

There’s no doubt, as Republican Congressman Justin Amash concluded after reading the Mueller report, Trump has “engaged in impeachable conduct.” Whether he actually committed crimes does not matter, Amash points out, because impeachment “simply requires a finding that an official has engaged in careless, abusive, corrupt, or otherwise dishonorable conduct” — all spelled out in Mueller’s report.

Still, no matter how strong the case, Speaker Nancy Pelosi’s advised Democrats in Congress not to rush into impeachment. They’re better off, she told them, focusing instead on three priorities: their legislative agenda, especially health care; oversight hearings and beating Donald Trump in 2020. And, for a while, most Democrats agreed to hold back. Until this week, when Trump did everything he could to force impeachment hearings.

For many Democrats, what made the difference was Trump’s stopping former White House Counsel Don McGahn from testifying before the House Judiciary Committee. Democrats wanted to hear from McGahn because, in his report, after revealing that Trump twice ordered McGahn to fire him as special counsel and then lie to the New York Times about it, Mueller says it’s up to Congress to investigate further in order to determine whether Trump is guilty of criminal obstruction of justice. By blocking McGahn’s testimony, Trump’s also blocking Congress from doing its job.

On top of that came Baby Donnie’s White House temper tantrum. In a political stunt clearly orchestrated ahead of time, Trump stormed out of an infrastructure meeting with Speaker Pelosi and Senate Democratic Leader Chuck Schumer, supposedly upset because Pelosi had earlier accused him of engaging in a cover-up (which he has!), and went directly to the Rose Garden, where reporters were already assembled in front of a campaign-style podium with the sign “No Collusion. No Obstruction.” “I don’t do cover-ups,” Trump fumed. No, and Nixon wasn’t a crook, either.

With that, the anti-impeachment dam so carefully built by Nancy Pelosi began to crumble. A week ago, there were only a handful of Democrats wanting to start impeachment hearings right away. Today, there are 30 to 40, including at least one member of the House leadership, Rhode Island’s David Cicilline. It’s reached the point where House Budget Chairman John Yarmouth told me, impeachment hearings are now “inevitable.”

Still, Pelosi urges restraint, based on five arguments. One, doing impeachment would suck up all the oxygen and make it practically impossible to pass legislation on any issue. Two, impeachment has little public and zero, aside from Justin Amash, bipartisan support. Three, Democrats can achieve almost the same results by proceeding first with oversight hearings now underway in the judiciary, intelligence, financial services, ways and means and oversight committees. Four, as noted above, impeachment would hit a dead end in the Senate. Five, impeachment might actually help Donald Trump, by allowing him to run for re-election as a victim.

For now, I believe, Speaker Pelosi makes a strong case. Democrats are smart to hold off, while letting the case build against Trump for 2020. But that could still change, depending on how he responds to court rulings against him.

That’s the key. After refusing to comply with congressional subpoenas, if Trump also rejects court orders to comply, he’d be declaring war on not one, but two co-equal branches of government. At that point, Democrats would have no choice but to launch impeachment hearings. And it’s a safe bet that’s what’s going to happen.

Bill has also recently published a book, Trump Must Go: The 100 Top Reasons to Dump Trump (And One to Keep Him) 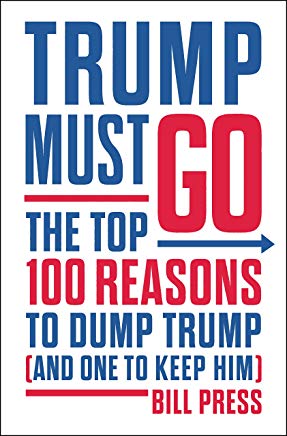