Once upon a time, in the ‘Land of milk and honey’, Independence Day, celebrated on the 4th of July each year across the United States, meant something.  It was a time of remembrance, a time when the independent spirit of the founders of this nation rose up and declared that this would be a nation in and of itself, that we would fight for the right to make our own laws and to form a nation based on humanitarian values.

That was then, and this is now.  Today, the United States has become a greedy, war-mongering nation rent by political differences, fueled by greed and lust for power.  Add to that, a government so corrupt that it enables a power-hungry dictator to shred the Constitution that has been the fabric of our nation for 232 years and has meekly handed over the keys to the castle in exchange for empty promises of great riches.

The men and women who sought to make this a respectable and worthy nation would no doubt be horrified by what this country has become, as are many of us still living today.  It would be rather like seeing your child, a child who once had so much potential, fall victim to drugs and alcohol and throw away his opportunities.  This is exactly what has happened in the U.S.

Those who valued wealth over humanitarian causes, have given us a cruel and malevolent dictator who, by all appearances, plans to continue on the path to completely destroying all that was once good about this country, and we seem helpless to stop the madness.  Point in case … Trump’s plans for tomorrow. 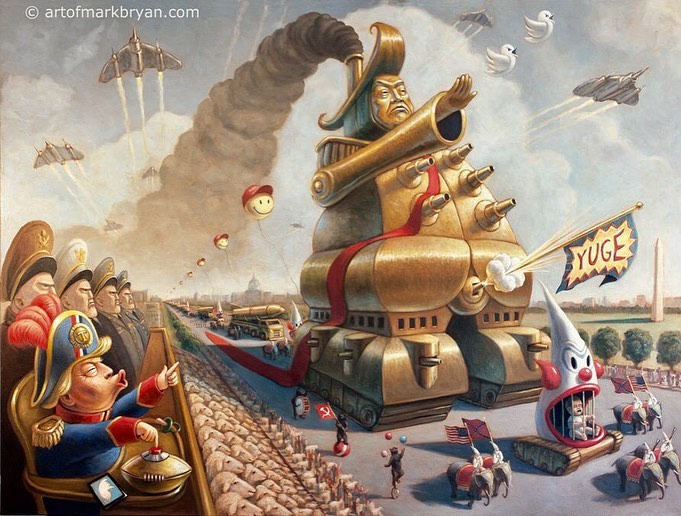 The Fourth of July in Washington D.C. was once a fun family affair, with picnics, music, festivities, and at the end of the day, fireworks.  This year, all fun festivities have been cancelled in favour of a political rally by a madman whose already-bloated ego requires that the entire nation bow down and pay fealty to him.  He has turned the marking of a historical event into a celebration of … Trump.  Forgive me if I view this in rather the same vein as a celebration of the sinking of the Titanic.

Tomorrow’s events promise to be a disgusting display of hedonistic arrogance on the part of Trump and of some portion of this country at a cost to We the People of somewhere in the neighborhood of $100 million, though the cost estimates have not been forthcoming by Secretary of the Interior David Bernhardt.  Congress, specifically the Senate Appropriations Committee, requested the cost estimates days ago.  A similar affair was considered for Veteran’s Day in 2018, but was cancelled in the face of cost estimates around $92 million.  What changed?  Why is it all of a sudden alright for Trump to stage this costly “tribute to self”?

The only thing that will, hopefully, put a damper in Trump’s illusion of grandeur is that there are multiple large protests being planned.  The baby Trump blimp that featured prominently in the UK’s “welcoming” of Trump has arrived on our shores and was planning to fly above the Lincoln Memorial all day, but now the government has said that it cannot be filled with helium and must be kept out of Trump’s field of vision.  Other protests are guaranteed, and while Trump will wear blinders to them, they will firmly show that We the People do not favour a display of military hardware and a political campaign speech by he-who-would-be-king.

The fourth of July is just another day … one where the trash will not be picked up and the mail will not be delivered, but still … it’s just like any other day.  There is no longer anything special to celebrate, for what once was, is no longer.