Sean Doolittle is a pitcher for the Washington Nationals, the baseball team that won the World Series on Wednesday after beating the Houston Astros in game #7.  As is tradition, the winning team has been invited to a ceremony at the White House slated for tomorrow afternoon.  Sean Doolittle will not attend.  I’ll let him tell you the reason in his own words. 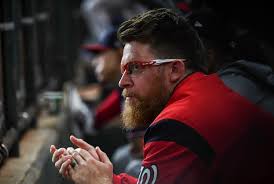 “There’s a lot of things, policies that I disagree with, but at the end of the day, it has more to do with the divisive rhetoric and the enabling of conspiracy theories and widening the divide in this country. My wife and I stand for inclusion and acceptance, and we’ve done work with refugees, people that come from, you know, the ‘shithole countries’. At the end of the day, as much as I wanted to be there with my teammates and share that experience with my teammates, I can’t do it. I just can’t do it.

I have a brother-in-law who has autism, and [Trump] is a guy that mocked a disabled reporter. How would I explain that to him, that I hung out with somebody who mocked the way that he talked or the way that he moves his hands? I can’t get past that stuff.

People say you should go because it’s about respecting the office of the president. And I think over the course of his time in office he’s done a lot of things that maybe don’t respect the office.  The rhetoric, time and time again, has enabled those kind of behaviors [racism & white supremacy]. That never really went away, but it feels like now people with those beliefs, they maybe feel a little bit more empowered. They feel like they have a path, maybe. I don’t want to hang out with somebody who talks like that.

I don’t want to get mad online, as they say. I want people to know that I put thought into this, and at the end of the day, I just can’t go.”

Some will no doubt criticize Sean’s decision, but in my book, he is a man of conscience who has the courage to stand for what he believes.  Let me tell you a bit about Mr. Sean Doolittle and his wife Eireann Dolan …

In 2015, the Oakland Athletics announced they would host their first-ever Pride Night, to honor LGBT fans. Dolan, who has two moms, wanted to be supportive of the team’s efforts to welcome LGBT fans to the Oakland Coliseum.  Some season ticket holders had negative reactions to the announced Pride Night, and said they planned to not attend the game; Dolan put out a call on her blog and Twitter feed that she would purchase any tickets at face value and donate them to local LGBT charities.  She and Sean purchased 900 tickets they donated to LGBT youth groups.

In November of that same year, disturbed by widely growing anti-refugee sentiments, they organized a Thanksgiving meal for Syrian refugees in Chicago, one at which the mayor of Chicago, Rahm Emanuel, and his aldermen served as greeters and waiters.

The couple co-authored an article in Sports Illustrated about the need to fund mental health resources for discharged veterans. They took 10 briefings on the subject, from groups including the Rand Institute, Brookings Institution and the Human Rights Watch. This wasn’t the first time the couple has supported veterans’ issues: they also created a registry to furnish two Northern California houses through Operation Finally Home, an organization that provides housing to wounded veterans and their families.

They are avid supporters of the BlackLivesMatter movement, and advocate for stricter gun laws.  These are two people who have a social conscience, who care about people, who are doing something to make things better.  As Sean says …

“I think people can see the amount of work Eireann and I put into it, the amount of time we spend making sure we do it responsibly, that we’re not just being opportunistic — that we’re doing it in a way that other people have a chance to get involved so we’re not just, like, yelling into the void and retweeting things … I’m not just an athlete doing something for likes on social media.”

So, Sean will not attend the celebration with his teammates tomorrow afternoon on the White House lawn.  Donald Trump will attend, he will preen for the cameras, he will toot his horn, pat himself on the back, and he will take the spotlight away from the team.  If you ask me which is the better person, which is the better man, I think you know what my answer will be.  My hat is off to Mr. Sean Doolittle.

29 thoughts on “A Man Of Conscience”