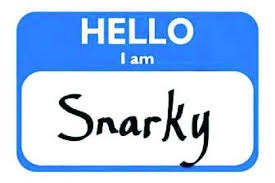 Today, I had a bunch of snark-buildup, but all just little things, small thoughts (no comment from the peanut gallery about small minds –> small thoughts!) that only warrant about a paragraph each, so I went with calling them mini-snippets.  Besides that, it’s housecleaning day, so my time to write is somewhat limited … somebody’s got to keep this place from being condemned by the city!

Now it comes out that not only did Trump attempt to blackmail Ukrainian President Zelenskyy in order to force him to announce an investigation of presidential candidate Joe Biden, but also his former nemesis Hillary Clinton.  WTF???  Why Hillary Clinton?  My best guess is that he is still so embarrassed by the fact that she won nearly three million votes more than Trump did in the 2016 election that he will not leave her alone until he takes his last breath!  Vindictive, ignorant, jealous … what a waste of space on earth is Donald Trump.  If he spent half as much time studying the briefs his staff provide him, trying to understand how our government works, actually reading the Constitution, why we might actually have a president.  As it is, we have a very ignorant and dangerous juvenile delinquent in an old man’s body.

Trump has been ordered by New York Judge Saliann Scarpulla to pay $2 million in damages for misusing funds from a tax-exempt charity — taking the charity’s money to pay debts for his for-profit businesses, to boost his 2016 campaign and to buy a painting of himself.  A painting of himself?  Blech.  In addition to the $2 million, Trump also agreed to disburse the $1.8 million remaining in the foundation to a set of charities, and to shutter it for good.  Funny, isn’t it, that the man who claims to be president of the country, a man who holds our lives in his hands, bilked people out of millions of dollars, spent them on himself rather than such things as helping the poor, or veterans, and yet he remains in office.  What a low this nation has sunken to. 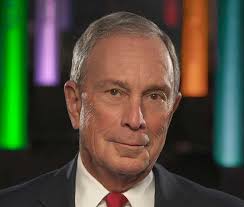 Former New York City Mayor Michael Bloomberg is apparently throwing his hat in the ring for the 2020 presidential election, after saying he would not do so earlier this year.  Bloomberg is another billionaire businessman, folks … just about the last thing we need at this point.  At least he does have some governing experience and has a bit of a brain in his head, unlike the incumbent, but still … we do not need somebody with such great wealth that he cannot even begin to appreciate the problems of the average person struggling to provide for their families.  Not, mind you, that any of the top candidates in this race are living below the poverty level:  Elizabeth Warren’s net worth is estimated at $12 million, Joe Biden’s at $1.5 million, and Bernie Sanders’ at $1.9 million.  Still, they are peons as compared to Bloomberg.

Trump, by the way, has already picked his nickname for Bloomberg:  Little Michael.  He says Bloomberg won’t do well because he has “some personal problems”, and that there is nobody he’d rather run against.  Personally, I think he’s jealous because Bloomberg has more money, with a net worth of $51.5 billion, than he does.

Ol’ two-faced Lindsey Graham is back on the radar (did he ever leave it?)  Lindsey is so certain that the impeachment process against Donald Trump is without merit that he now says he will not even bother to read the evidence, the pages of testimony that has provided proof that Donald Trump broke the law.  Talk about hypocrisy!  Look what Lindsey had to say back in 1999 after Bill Clinton had been impeached by the House and was facing trial in the Senate:

Seems that there are millions of people out there, mostly republicans, who claim to think that everything Trump has done is ‘okay’.  Obstruction of justice in trying to shut down the very legitimate Mueller investigation into Russian interference in our 2016 election.  Obstruction of justice in refusing to allow government employees to honour subpoenas by the House investigative committees.  Blackmailing the Ukrainian government to help him against a competitor in the 2020 election.  Threatening and bullying political opponents.  Removing almost every environmental protection that was on the books and selling off our national land to the fossil fuel and logging industries. Lying on a daily basis to cover his own a$$.  And much, much more, yet all of it is ‘A-okay’ with those 40% or so of people who still sing Trump’s praises.  Let me just throw out a single question here:  What if it was President Barack Obama who had done even a small percentage of those things?

Well, those little mini-snippets should give you something to ponder on this weekend, eh?  And to start the weekend off on a humorous note, here’s Seth Meyers …

24 thoughts on “Snarky Mini-Snippets To Start The Weekend!”