A couple of news items crossed my path yesterday that had a common theme … bigotry.  Bigotry takes many forms – misogyny, racism, anti-Semitism, homophobia, Islamophobia and more – all of it ugly.  The human species is the only one on earth that has this superiority complex, and I’ve yet to understand why.

Back in 2013, after George Zimmerman was acquitted in the murder of a young, unarmed black man named Trayvon Martin, a new movement came into existence:  Black Lives Matter.  In the years following, there were far too many incidences of police killing unarmed black people with little or no provocation, and the words, Black Lives Matter, sometimes shortened to BLM, became even more relevant as we came to realize that the U.S. is still very much a racist nation.

But then, some portion of the Caucasian population took umbrage at the phrase and started their own counter-movement, ‘All Lives Matter’.  They questioned why black lives mattered more than white, for they lacked understanding.  Nobody was saying that black lives mattered “more”, just that they mattered “too”.  It was a statement of equality … a life is a life, whether the person’s skin is black, white, or green.  Since the beginning of this nation, people of colour have been looked down on by society, and the time is past for us to stop that!  That is what Black Lives Matter is about … equality.

But, it isn’t only black people who are discriminated against in this country.  Jews, Muslims, Hispanics … and one of the most misunderstood groups, LGBTQ people.

Back in 1970, on June 28th in New York City, there occurred what would become known as the first “Gay Pride” march, to mark the one-year anniversary of the Stonewall Riots.  This was the birth of the Gay Pride movement … pride as opposed to shame or social stigma.  Like the Black Lives Matter movement that would come later, it was about equality.  But, just as with Black Lives Matter, bigots misunderstood the meaning.

In response to Gay Pride, or LGBT Pride, a relatively small group of people recently formed what they call “Straight Pride”.  But that “Straight Pride” movement is not about equality … not in the least.  It is a highly discriminatory movement, an anti-LGBT movement that seeks to harm.  Fortunately, the movement has not gained much momentum and doesn’t appear to be taken seriously by very many.

Last Saturday, a group calling themselves the ‘Super Happy Fun Group’, planned a ‘Straight Pride’ march in Dallas, Texas.  The group told their followers they were going to make a “mighty impact on Dallas” by marching through downtown on Saturday, “spreading the joys of straight pride” to all who would hear.  Dallas police took the threat seriously and had a dozen uniformed and plainclothes officers on hand to protect the demonstrators from counter-protesters.  The local paper, the Dallas Observer, sent a reporter to cover the event.

The turnout?  Three people showed up to march in the ‘big parade’. 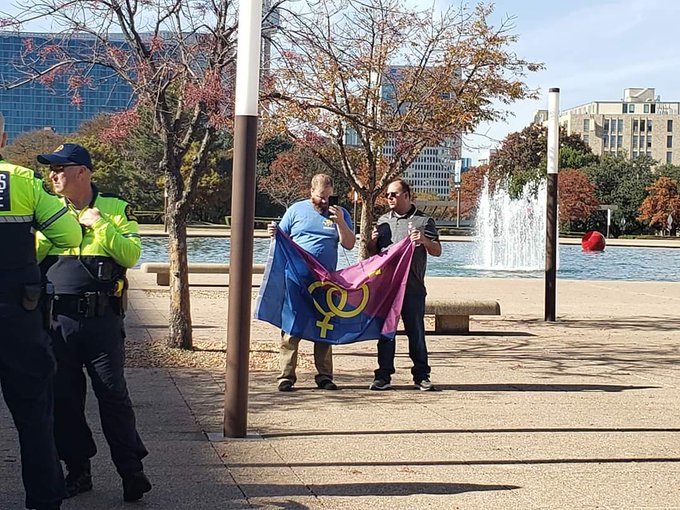 Perhaps there is hope for this nation after all?  Perhaps some people are getting tired of the hate and bigotry that is tearing this nation into bits?  Is it too much to hope for?  Yeah, probably.

A change of heart?

I’ve mentioned before my aversion to certain businesses that engage in discriminatory practices, such as Hobby Lobby and Chick-Fil-A.  Of late, Chick-Fil-A has come under heavy criticism for their anti-LGBT practices, including making large donations to anti-LGBT groups.  When Popeye’s came out with their chicken sandwich that is considered to be comparable to Chick’Fil-A’s famous chicken sandwich, Chick-Fil-A apparently began losing a significant amount of business.

Chick-fil-A announced Monday that it would no longer be making charitable donations to the Fellowship of Christian Athletes and the Salvation Army—two organizations with decidedly anti-LGBTQ stances.  However, in years past Chick-fil-A had claimed to have distanced itself from the anti-LGBTQ cause, but its tax returns told a different story.

Time will tell if the company has truly changed its stance.  I have my doubts.

Y’know, friends … we wouldn’t need Black Lives Matter or LGBT Pride movements if people just treated everyone with kindness, regardless of their skin colour, religion, gender preferences.  The world is a big, sometimes scary place, and life is hard sometimes for most all of us.  We’re all in this together, folks … why are there always some people who judge others based on the colour of their skin or other superficial criteria?  Isn’t there enough hate in this world without adding to it senselessly?  There is no room for this clannish, tribal mentality in today’s world.  Women’s rights, civil rights, gay rights … those should not have to be fought for, they should be the natural order of things.  Sigh.

38 thoughts on “Why Do We Need Bigotry?”