Last week, I wrote about a couple who bought an old ship and turned it into a hospital ship, serving the poor far and wide.  A noble effort, for sure, but also one that few of us could match.  This week, I write about a few people … just average people like you and me … doing little things on a daily basis that mean so much to others.

Ed Higinbotham is a self-taught craftsman who took up woodworking as a hobby. Initially, he says he just wanted something to keep his hands busy, but toymaking soon turned into a passion.  Ed is 93 years old and lives in Georges Township, Pennsylvania, where he has a workshop in his home.  Every day, he spends eight hours in that workshop making toys.  And what, you might ask, does he do with all those toys? 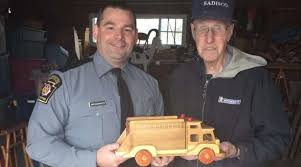 He donates them to homeless shelters and Head Start programs in the area.  He fashions cars, trucks, and horse-drawn tractors out of wood, taking great care to include the small details, like the ladder on a fire truck or the bridle on the horse’s head. When asked if he was Santa Claus incarnate, he replied, “It’s just something that I enjoy doing and now I make somebody else happy, and if that’s Santa Claus then I’m Santa Claus.”

Nancy Banta makes things too, though not wooden toys.  Nancy lives in Rumson, New Jersey and she crochets blankets to donate to sick children in hospitals.

This year alone, Nancy has made 49 blankets, and in the 20 years she’s been doing this, she estimates she has made and donated more than 1,000 blankets!

And then there’s Adam Armstrong, from Penn Laird, Virginia.  Adam has done well enough for himself, selling real estate, but he didn’t always have it easy.  As a child, growing up in nearby Harrisonburg, Adam’s family was poor.  A few weeks ago, Adam decided to return to Harrisonburg … with a 26-foot rental truck filled with toys!

He went to four different apartment complexes in low income neighborhoods and distributed some 1.300 toys that he had bought to give out.

He gave away bikes, balls and remote-control cars among other items to residents of Harris Gardens Apartments — a low-income, Section 8 complex in Harrisonburg where he once lived.  And then he went on to three others to do the same.

“You see these kids and you hand them a baby doll, or a Nerf gun, a bicycle, two little boys throwing a football and you can’t put a price on the feeling that gives you. I consider myself very blessed.”

Simple things, yes, but gifts from the heart.  And now I want to tell you about a program that is doing good things in malls around the nation.  The program is called Santa Cares and it is run by two non-profits, Autism Speaks and Cherry Hill Programs.  I have known several children with autism, and one with Asperger’s Syndrome … they do not do well in crowds or where there is a lot of noise and activity.  You can only imagine the trauma of trying to make a trip to the mall to see Santa amid all the hustle and bustle of the holiday season.

Santa Cares works in conjunction with malls all over the nation to schedule Santa Cares Days, days in which the mall opens early for parents to bring their autistic children to see Santa in a much quieter, calmer atmosphere.  The lights are dimmed and the music either off or the volume lowered.  The Santas at these events are specially trained in how to interact with special-needs children. Santa will lay on the floor or stand behind his chair to make sure each child is comfortable. 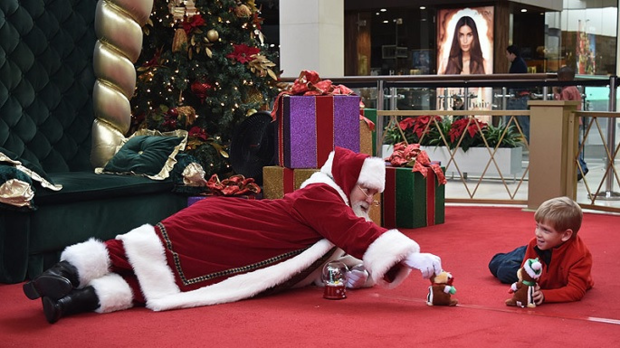 The program, which has been in existence since 2015, will be held in 582 shopping centers in the U.S. and Canada.  Again, it’s a small thing, but for those kids who might not otherwise ever get to see Santa except on television, it may well be the memory of a lifetime.

I end with a not-so-small thing.  You all know by now that I am not a fan of big business and capitalism, but every now and then, I come across a company that is doing something positive.  St. John Properties based in Baltimore, Maryland, is one company that has earned a shout-out today.

The company recently achieved its goal of developing 20 million square feet space in eight states, according to a company press release. Founder and chairman, Edward St. John, wanted to share the milestone with his employees.  At the annual holiday party, each employee was handed a red envelope.

Imagine their surprise when they opened their envelopes to find bonuses of $50,000 and more, depending on years of service!  Some are getting six-figure bonuses upwards of $250,000, and the total of the distribution was $10 million.  Said Mr. St. John …

“To celebrate the achievement of our goal, we wanted to reward our employees in a big way that would make a significant impact on their lives. I am thankful for every one of our employees, for their hard work and dedication. I couldn’t think of a better way to show it.”

What a great man.  Can you imagine if every CEO was as caring and understood that without their employees, they are nothing?

Well, friends, that’s a wrap for today.  I hope this helps restore a bit of faith in humanity, for we surely aren’t seeing it in the news these days.  Remember, there are lots of good people out there … they just mostly fly under the radar and are overshadowed by the attention-seekers.  Next Wednesday is Christmas, and Filosofa will be taking a day off, so Good People will return the following Wednesday, New Year’s Day.