Well, the conflict between Trump and Iran seems to be simmering rather than boiling over, at least for the moment.  Trump claims no lives were lost in last night’s bombings, though I am very skeptical.  You don’t drop 12 ballistic missiles without their being some casualties.  It’s rather a shame when one doesn’t trust a single word the president utters, but he has brought that on himself with his constant lying.  About the only thing you can predict about Trump is that he will lie.  Time will tell.  Iran announced, after attacking two military bases in Iraq last evening, that they are finished … for now … retaliating for the assassination of General Qassem Soleimani.  Trump insists he will impose even harsher “punishing” sanctions on the country than before.  I read his speech and all I really saw was “blah blah blah” … nothing relevant or likely true.  I have to wonder, though, if he realizes that the sanctions he imposes do not hurt the government but hurt the people, people who are already struggling to survive?  Or if he even cares.  Doubtful.  Well, since that situation appears to be relatively stable for the moment, though it’s not likely to remain so for long, I shall turn my thoughts to other things today.

Mitch McConnell proves to us once again that the will of the people matters not one bit.  He has decided to move forward with the impeachment trial, despite the fact that Nancy Pelosi has not yet sent the articles of impeachment to the Senate.  He really wants to just sweep this bit of dust under the rug and get it over with before we get close to the November election.  He has better things to do, y’know, like campaign for his own re-election, and protect li’l Donnie from the big, bad democrats!

Mitch announced yesterday that he will not commit to calling witnesses or hearing new evidence.  As we heard last week, both Mitch and Lindsey Graham have made it perfectly clear that they have no intention of conducting a real trial, but rather a dog-and-pony show that will result in the predetermined acquittal of Donald Trump.   Mitch says he “has the votes” to move forward … in other words, the republican senators have already decided their vote without seeing the articles of impeachment, without hearing from any witnesses, and without seeing the evidence.  Wow.

If the events of the past week have not convinced the republican senators that this “president” is a clear and present danger to the survival of life on planet earth, then they are as blind, deaf and dumb as I originally thought.  The majority of people in this country do not support Trump, but … we really don’t matter in the grand scheme of things, do we?

Remember when you were a kid?  Ever throw a snowball at a person or a car or other object just because it was fun?  You didn’t intend harm, you were just having fun.  A group of kids in Milwaukee, Wisconsin, were having fun lobbing snowballs at passing cars last Saturday.  Harmless fun … a snowball thrown at your car isn’t likely going to damage the car or cause an accident.  But …

The driver of a white Toyota took umbrage and fired shots into the group of children, striking two — a 12-year-old girl and a 13-year-old boy – and then drove off.  Both children are expected to recover, and police have yet to find the driver of the vehicle and are asking for any information from possible witnesses or nearby home-surveillance cameras.

It’s a sign of the times in this country … people are angry and it doesn’t take much to set them off, which in my book is yet another good reason that we do not need guns in the hands of every Tom, Dick and Harry in this nation!

Two Super Bowl add slots.  Both Trump and Democratic hopeful Michael Bloomberg have spent $10 million each to buy a 60-second ad during the Super Bowl on February 2nd.  I don’t watch the Super Bowl, but if I did, this news would be enough to cause me to skip it this year.

My first complaint is that Super Bowl ads are usually the ones that sponsors go all out on, like Budweiser’s Clydesdale commercials … the ads are usually more fun than the game itself!  And so now, people have to watch two rich, old men running their mouths and telling who-knows-what lies?  No thanks!

My second, more viable complaint is … how many people could be provided a home, how many children could be fed … how much better use these two privileged men could have put that money to.  It literally sickens me to see so much money literally thrown down the toilet for self-interest.  Yes, yes … I realize this is the way of the world, or at least the political world in the United States.  I do know that every political candidate takes money from both rich and poor, then uses it to get their name and face splattered all over the media so people will remember them on November 3rd.  But, I still think it’s a crappy way to spend money when people are living on the streets, children are going to bed hungry at night, and people are dying because they can’t afford medical treatment.

Among the news of the Trump-Iran embroglio and the Mitch & Lindsey show, you may have missed the fact that a major earthquake measuring 6.4 on the Richter Scale hit Puerto Rico yesterday.  The island has been mostly without electricity ever since. 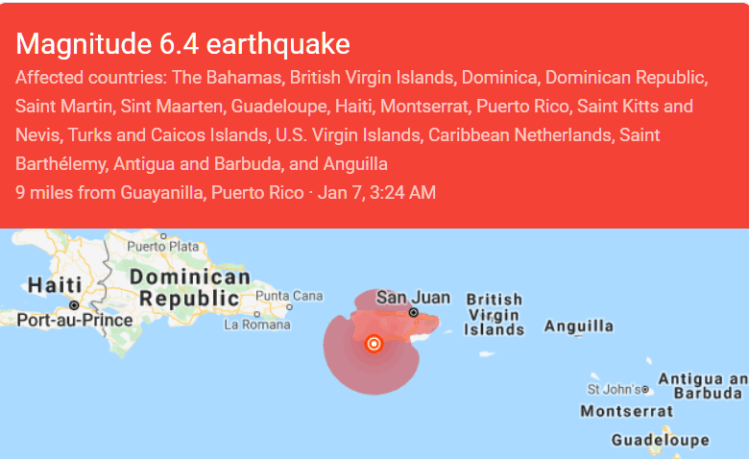 I had an email this morning from our dear friend Horty, aka Dr. Rex, telling me that she and MJ are safe, though their plans to return back to the states have been delayed.  Apparently, the island has been experiencing tremors constantly since December 28th and the earth still trembles today.

According to The Guardian …

Many Puerto Ricans woke up on Wednesday to a second day without electricity after the island’s worst earthquake in a century knocked out power, collapsed homes and killed at least one person.

All schools remained closed and public employees except police and health workers stayed at home as engineers checked the safety of buildings after Tuesday’s 6.4-magnitude quake and powerful aftershocks.

Some Puerto Ricans in the hard-hit south of the island moved beds outside on Tuesday night and slept outdoors, fearful their homes would crumble if another earthquake hit after a week of tremors.

Well, I have imposed enough of my ill-humour on you for one afternoon, so I shall go take my hostilities out elsewhere … perhaps on the load of towels sitting in the dryer!