As part of this week-long tribute to Kenny Rogers, one of my all-time favourites, each night I plan to include a bit of trivia.  In 2017, Kenny Rogers did an interview with Southern Living magazine.  One of the questions he was asked was to recount his favourite memory of Dolly Parton, his long-time friend and singing partner.  Kenny said his favorite moment was in 2013 while they were recording their final duet together called You Can’t Make Old Friends. At one point, he looked up and saw Parton was no longer at her microphone. Suddenly, she appeared by his side, and put her arms around his neck. “Kenny, I think you should know, I could never sing at your funeral.”

Rogers laughed at the memory. “I went, ‘So we’re assuming I’m going first?’ ” He chuckled again. “But I love her for that. You never know what she’s going to say, but it always comes from love.” 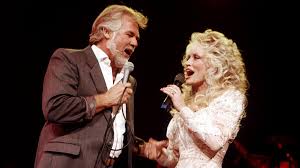 When I first mentioned that I was considering Ellen’s idea for a week-long tribute to the late Kenny Rogers, you guys started giving me ideas, letting me know your favourites, and I jotted them all down.  The #1 favourite, with four requests, is this one … Ruby Don’t Take Your Love to Town.

I had no idea that Mel Tillis had written this song!  The song tells the story of a wounded soldier who has returned home to a woman who shows him little sympathy, leaving him to go out at night and enjoy the company of other men. All he can do is beg her to stay home and keep him company, but his pleas fall on deaf ears.

Tillis based the song on a real-life couple who lived near his family in Florida. In real life, the man was wounded in Germany in World War II and sent to recuperate in England. There, he married a nurse who took care of him at the hospital. The two of them moved to Florida shortly afterward, but he made periodic return trips to the hospital as problems with his wounds kept flaring up. His wife saw another man as the veteran lay in the hospital.  The real couple’s story had a tragic ending:  the man killed her in a murder-suicide.

I also didn’t know that Tillis was the first to release this song, including it on his 1967 album Life’s That Way. Waylon Jennings, Johnny Darrell, The Statler Brothers and Bobby Goldsboro all recorded the song later that year, with Darrell’s version going to #9 on the Country chart. Kenny Rogers recorded the definitive version with his band The First Edition in 1969, taking it to #2 in the UK and to #6 in the U.S.

A lot of controversy surrounded this song when it became a hit for Kenny Rogers in 1969, as the Vietnam War was raging and the song was often assumed to be about a man who came home crippled from that war. Rogers would perform the song in a jovial manner, and the crowd would often clap and sing along, so to some it was seen as disrespectful to veterans. In a 1970 interview with Beat Instrumental, Rogers defended the song, saying:

“Look, we don’t see ourselves as politicians, even if a lot of pop groups think they are in the running for a Presidential nomination. We are there, primarily, to entertain. Now if we can entertain by providing thought-provoking songs, then that’s all to the good. But the guys who said ‘Ruby’ was about Vietnam were way off target – it was about Korea. But whatever the message, and however you interpret it, fact is that we wouldn’t have looked at it if it hadn’t been a GOOD song. Just wanna make good records, that’s all.”

You’ve painted up your lips and rolled and curled your tinted hair
Ruby are you contemplating going out somewhere?
The shadows on the wall tell me the sun is going down
Oh Ruby, don’t take your love to town

It wasn’t me that started that old crazy Asian war
But I was proud to go and do my patriotic chore
And yes, it’s true that I’m not the man I used to be
Oh Ruby, I still need some company

It’s hard to love a man whose legs are bent and paralyzed
And the wants and needs of a woman your age really I realize
But it won’t be long, I’ve heard them say, until I’m not around
Oh Ruby, don’t take your love to town

She’s leaving now cause I just heard the slamming of the door
The way I know I heard its slams one hundred times before
And if I could move I’d get my gun and put her in the ground
Oh Ruby, don’t take your love to town