In a minute, I will share a piece by Robert Reich, but first I have an update on this morning’s post, King Donnie.  You may remember that I wrote about Trump claiming “When somebody is the president of the United States, the authority is total,” and saying that it would be entirely up to him, not the states’ governors, when the country would re-open for business.  Well, it seems that mine were not the only feathers he ruffled with his rhetoric …

“I don’t know what the president is talking about, frankly. We have a constitution … we don’t have a king … the president doesn’t have total authority.” – New York Governor Andrew Cuomo

“Nope. That would be the literal definition of a totalitarian government – which our traditions, our constitution, and our values all rightly and decisively reject.” – Steve Vladeck, Professor of Law at the University of Texas

“How & when to modify physical distancing orders should & will be made by Governors. But the Constitution & common sense dictates these decisions be made at the state level.” – Republican Senator Marco Rubio

I’m thinking maybe it’s about time for Trump to listen to the people who have actually read and understand the U.S. Constitution.  And now, I bring you Robert Reich on an entirely different topic and one of my own pet peeves … 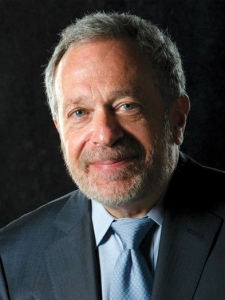 As millions of jobless Americans line up for food or risk their lives delivering essential services, the nation’s billionaires are making conspicuous donations – $100m from Amazon’s Jeff Bezos for food banks, billions from Microsoft co-founder Bill Gates for a coronavirus vaccine, thousands of ventilators and N95 masks from Elon Musk, $25m from the Walton family and its Walmart foundation. The list goes on.

On Wednesday, Forbes released its annual billionaires list, happily noting that “the planet’s wealthiest are helping the global effort to combat the Covid-19 outbreak”.

I don’t mean to be uncharitable, but much of this is self-serving rubbish.

First off, the amounts involved are tiny relative to the fortunes behind them. Bezos’s $100m, for example, amounts to about 11 days of his income.

Well-publicized philanthropy also conveniently distracts attention from how several of these billionaires are endangering their workers and, by extension, the public.

With online sales surging, Amazon is on a hiring binge. But Bezos still doesn’t provide sick leave for workers unless they test positive for Covid-19, in which case they get just two weeks. On 20 March, four senators sent him a letter expressing concern that the company wasn’t doing enough to protect its warehouse workers.

Walmart’s booming sales have caused it to hire more than 100,000 workers over the past three weeks. But the firm failed to implement social distancing for two weeks after the Centers for Disease Control and Prevention announced guidelines on 16 March. Several workers have died. Most still don’t have access to gloves, masks or hand sanitizer. They don’t get paid sick leave, not even at stores where employees have contracted the virus.

Musk initially dismissed sheltering as “dumb” and defied a sheriff’s order to shelter-in-place by keeping open Tesla’s factory in Fremont, California, telling employees the factory was an “essential” business.

The third way conspicuous philanthropy is self-serving is by suggesting that government shouldn’t demand more from the super-rich, even in a national emergency. As Rupert Murdoch’s Wall Street Journal editorial page put it, if we had a wealth tax like Elizabeth Warren proposed, “it’s unlikely [Bill Gates] would have the capacity to act this boldly.”

That’s absurd. Warren’s tax would have cost Gates about $6bn a year, roughly his annual income from his $100bn.

Besides, all the billionaire charity combined is a tiny fraction of the trillions the government has already spent on the coronavirus crisis. How does the Journal believe we’re going to pay down this added national debt if the wealthiest among us don’t pay more taxes? Even when this nightmare is over, most Americans will be hard pressed.

And why should we believe that Gates or any other billionaire’s “boldness” necessarily reflects society’s values and needs? Oligarchies aren’t the same as democracies.

The worst fear of the billionaire class is that the government’s response to the pandemic will lead to a permanently larger social safety net.

“Once the virus is conquered – and it will be – the biggest risk will be the political campaign to expand government control over far more of American economic life,” warns Murdoch’s Journal.

After all, the Great Depression of the 1930s spawned social security and the minimum wage, as well as a widespread conviction that government should guarantee a minimum standard of living. The second world war yielded the GI Bill and then the National Defense Education Act, enshrining the government’s role as a financier of higher education.

Even programs that don’t enjoy wide popularity when first introduced, such as the Affordable Care Act, enlarge the nation’s sense of what is reasonable for the government to do for its citizens. The ACA lives on, more popular than ever, notwithstanding the GOP’s determination to repeal it and Donald Trump’s efforts to undermine it.

As the pandemic challenges the security and safety of all Americans, some conservative politicians are proposing things that would have been unthinkable – certainly unspeakable – only months ago.

The Missouri Republican senator Josh Hawley is calling for the federal government to “cover 80% of wages for workers at any US business, up to the national median wage” until the crisis is over.

“Workers will benefit from the steady paycheck and the knowledge their jobs are safe,” he says.

If the pandemic has revealed anything, it’s that America’s current social safety net and healthcare system does not protect the majority of Americans in a national emergency. We are the outlier among the world’s advanced nations in subjecting our citizens to perpetual insecurity.

We are also the outlier in possessing a billionaire class that, in controlling much of our politics, has kept such proposals off the public agenda.

At least until now.

Robert Reich, a former US secretary of labor, is professor of public policy at the University of California at Berkeley and the author of Saving Capitalism: For the Many, Not the Few and The Common Good. His new book, The System: Who Rigged It, How We Fix It, is out now.

12 thoughts on “An Update And An Opinion”