Apparently, when Donald Trump decided to run for president of this nation, he did not understand the job, nor did he bother to read the job description.  I would like to correct that oversight at this time.

The United States of America, a misnomer by today’s standards, is comprised of 50 states.  Each of the 50 are part and parcel of the nation, and no one state carries greater weight than another, except by merit of population size as regards number of representatives in the House.  The people who are elected to ‘lead’ this nation are elected and expected to lead all 50 states with equal fervour.

It matters not whether those people are black or white, whether they are Christian, Jew, Muslim or atheist, matters not one whit if they are straight or gay, nor whether they are democrat or republican … they ALL have the right to equal representation by the members of Congress and by the president.  EQUAL.  The president does not … I repeat … the president does NOT get to choose certain people to represent while leaving the bulk of the population out in the cold.  This is not how it works.

But this is how Donald Trump believes it works and he has concluded that he only needs to represent the people who agree with him on every issue.  Further, he has decided to represent only people who live in states whose governors agree with him and bow to his wishes.  Hmmmm … sounds more like a king than a president, doesn’t it … an evil king at that.

Now, for starters, consider that no matter what state you live in, your state has likely broke the piggy bank since the beginning of the coronavirus pandemic.  New York has had the most cases of any state in the nation – 288,045 cases, 22,269 deaths as of this writing.  Add to that the more than $3.1 billion they have paid out thus far in unemployment claims, and you can see why the state is asking the federal government for assistance.  Some 8.4 million people live in the State of New York.  And yet, because the governor of New York, Andrew Cuomo, is a democrat, Trump, along with Mitch McConnell has basically given all those 8.4 million people the middle finger.

“Why should the people and taxpayers of America be bailing out poorly run states (like Illinois, as example) and cities, in all cases Democrat run and managed, when most of the other states are not looking for bailout help? I am open to discussing anything, but just asking?”

Because, asshole, you swore an oath to protect the people of this country.  The people who live in California, New York, Illinois and every other state are your responsibility.  Oh wait … Trump doesn’t understand that word, ‘responsibility’, for it has more than four letters.  To deem that any state is less worthy than another in these circumstances is unconscionable!  And, for those who are Trump supporters, you may wish to consider that this affects YOU too!

But it gets even worse.  You will remember that Trump doesn’t like immigrants, right?  One of his first acts after taking office was trying to ban Middle Eastern immigrants coming to the U.S. from predominantly Muslim nations. Shortly thereafter he began his horrendous acts of abuse toward Latino immigrants at the southern border taking children from their parents, keeping them in cages, and as we now know, those children were often subjected to terrible conditions, including sexual abuse. 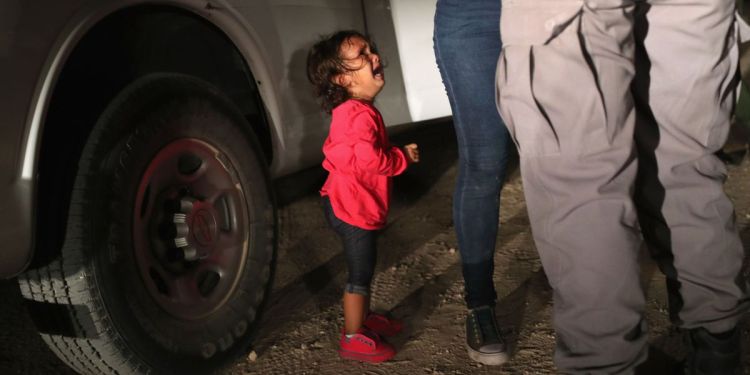 Well, turns out that Trump hates immigrants so much that he is punishing even citizens of this nation by withholding the stimulus checks of anybody who happens to be married to an immigrant!  A lawsuit has been filed against Trump, Mitch McConnell, and Treasury Secretary Steve Mnuchin by a man in Illinois.  Unfortunately, given that Attorney General William Barr has said Trump is above the law, I’m not sure how far the suit will get unless … it is joined by many more in the same situation and made a class action suit.

There are hundreds of examples of Trump’s lack of understanding just what, exactly, is expected of the president, and these are only the two most recent ones to flit across my radar.  There will, no doubt, be at least two more tomorrow.  Oh, one last thing … if you received a stimulus payment, whether by direct deposit or a physical check (unless, of course, you are married to an immigrant), you will be receiving a letter from Donald Trump sometime soon.  He will be telling you how wonderful it was that he signed the bill into law that provided for those monies.  I shan’t tell you what to do with your letter, but I plan to send mine back, with three words written in large letters in red Sharpie:  F*ck You, Bastard!  And the postage cost of $0.45 will be the best half-dollar I’ve ever spent!

I almost forgot … two more things:  First, I have achieved a high honour … I was on Twitter a few nights ago and a friend had commented on a post by Trump’s son, Eric.  I, however, was not able to read Eric’s post, for he has blocked me!  I was so thrilled!  I must have hit a raw nerve somewhere along the line, though I cannot remember a single time I’ve responded to him, or even seen any of his posts.

The second thing is just a bit of humour that was sent to me by both Colette and Roger a few days ago … I think you’ll enjoy it!

36 thoughts on “He Didn’t Read The Job Description …”