Lots on my radar in the past 24 hours … I guess it must be time for some … Snarky Snippets, eh?

In the small town of Bethel, Ohio, about 20 miles from where I live, a peaceful protest for Black Lives Matter took place last weekend.  It was a small demonstration, nobody engaging in any form of violence, just people turned out to make their voices heard.  There were about 80 people there … not a lot, but enough.  And then, things turned ugly.

On Sunday afternoon, some 700 counter-protestors showed up … motorcycle gangs, “back the blue” groups and proponents of the Second Amendment.  Some carried guns, others carried baseball bats and clubs.  700 people obviously intending violence, against 80 unarmed peaceful protestors.

Police say there were about 10 violent altercations, but no arrests were made because police were so overwhelmed that they had to prioritize keeping order and keeping people safe.  Wow … they couldn’t be bothered to look into the ‘violent altercations’ as a part of their effort to keep people safe?  And why the Sam Hell were there nearly nine gun-totin’ counter-protestors for every one peaceful protestor???  If this is a reliable measure of the types of people in this state, then I’m getting the heck out of Dodge! 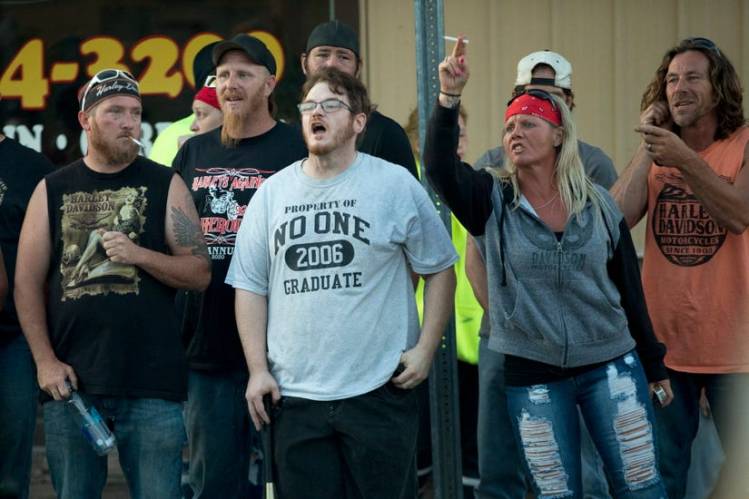 “If you would’ve asked me a week ago if any of this would come to Bethel, I would’ve said never. I’m still kind of in shock of it being here. It’s kind of amazing how quick social media spreads. We were told this morning they were bussing in protestors. We’re given screenshots from social media with some guys saying, ‘We’re going to Bethel, we’ll take care of what they didn’t take care of yesterday.’”

Wow, what a great police chief, eh?  Scratches his rear end while his town is being overrun by jackals with big guns looking for trouble.  Luckily no one was killed or seriously injured … this time.  I sense it is only a matter of time until blood is running in the streets of the U.S., especially with law enforcement officers like Teague, or those who only know how to shoot black men.

Amidst the snark, I’ve got to give the U.S. Supreme Court a big thumbs up!  Yesterday, the Court rejected the Trump administration’s attempt to dismantle the program protecting undocumented immigrants brought to the country as children, a reprieve for nearly 650,000 recipients known as “dreamers.”  The 5 to 4 decision was written by Chief Justice John G. Roberts Jr. and joined by the court’s four liberals.

It was the right decision.  Imagine that you were brought to this country when you were a baby, or 4 years old, have lived here all your life, went to school, worked two jobs to put yourself through college, and all of a sudden you are threatened with being deported to a country you never knew … a country where you have no friends, no relatives, no job … no future.

But, of course, Trump had to rant and rave, for that is all he knows how to do when crossed …

“These horrible & politically charged decisions coming out of the Supreme Court are shotgun blasts into the face of people that are proud to call themselves Republicans or Conservatives. We need more Justices or we will lose our 2nd. Amendment & everything else. Vote Trump 2020!”

I’ve got no idea how he made the leap from protecting young people’s lives to guns, nor do I particularly care.  And after that, he finished with …

“Do you get the impression that the Supreme Court doesn’t like me?”

I couldn’t resist … I responded to his tweet with “Nobody likes you, fool!”  Trump’s rants these days are just so much noise … I doubt anybody with a brain takes them seriously.  But kudos to Chief Justice John Roberts, as well as Justice Stephen Breyer, Justice Ruth Ginsburg, Justice Sonia Sotomayer, and Justice Elena Kagan … great job!!!

Mary Elizabeth Taylor is an American politician who has served as the Assistant Secretary of State for Legislative Affairs since October 18, 2018.  Taylor was viewed as a loyal member of the administration and is a lifelong member of the Republican Party.  Justice Neil Gorsuch administered Taylor’s oath of office at her swearing-in ceremony in December 2018 at the State Department.

Before joining the administration, Taylor was an aide to Senate Majority Leader (not for long) Mitch McConnell where she worked as a member of his cloakroom staff helping oversee legislative debates on the floor. She comes from a family with a history of public service; her mother, Kristin Clark Taylor, served as the White House’s director of media relations under President George H.W. Bush and was the first black woman to hold that job.

“Moments of upheaval can change you, shift the trajectory of your life, and mold your character. The President’s comments and actions surrounding racial injustice and Black Americans cut sharply against my core values and convictions. I must follow the dictates of my conscience and resign as Assistant Secretary of State for Legislative Affairs.”

It speaks volumes when a lifelong republican, a party loyalist, can no longer stomach Trump’s racism.

Until Monday, Michael Henkel was the supervisor for the Writ Services Unit of the Philadelphia Family Court … an important position.  Mr. Henkel was fired on Monday.  Why?  For having violated “multiple codes of conduct and nondiscrimination policies.”  Specifically, over the weekend, Mr. Henkel was caught on video ripping down Black Lives Matter posters and art that were put up along a chainlink fence just outside of a Philadelphia community center. In the video, the man says that his tax dollars “pay for” the fence, which gives him the right to pull down the artwork … put up on the fence by other people whose tax dollars pay for that fence.  See the irony there?

But it gets worse.  A woman who lives in the area said “Black Lives Matter,” to which Henkel replies: “Not to me they don’t.”

Yep, folks, it’s all on video … he really said that.  Michael Henkel … a man who has held a position responsible for making sure that everyone connected to Family Court proceedings was informed about court dates and other important information in a city where almost half the population is black.  Good riddance, Michael … farewell, adieu.  WHERE do these asshats come from???

Okay … I’ve managed to get my own blood pressure above the recommended daily allowance now, and likely yours too, so … I shall gently bow out for a few hours … but never fear!  I shall return!

24 thoughts on “Join Me In Some Snarky Snippets?”