I’m full of snark from a variety of items in yesterday’s news.  What’s new, right?

We’ve all heard about the ridiculous level of federal force being used in Portland, Oregon, where troops – largely unidentified and unidentifiable – dressed in riot gear and heavily armed, are abducting protestors off the streets, shoving them into unmarked vans without even telling them why they are being arrested or by what authority.  These forces are also using tear gas, rubber bullets, stun grenades and other weapons on protestors and any innocent bystanders who happen to be nearby.  One such person was, in fact, the Mayor of Portland, Ted Wheeler!

As Mayor Wheeler stood at a fence guarding a courthouse during another night of protest, watching the carnage these federal troops were inflicting upon his city, he was suddenly sprayed with tear gas.  This, my friends, is far too much.  The presence of federal troops was not called for, and in fact last Friday, Mayor Wheeler told Trump to, “keep your troops in your own buildings or have them leave our city.”

Portland was, as most of us feared, only the beginning of Trump’s attempt to impose a form of martial law, for Trump announced on Wednesday that he will deploy more federal troops to both Chicago and Albuquerque, New Mexico.  Is this really the nation we want to live in?  What’s next?  Your city?  Mine?

The judge is right …

Earlier this month, Michael Cohen, Trump’s former attorney and personal ‘fixer’, was returned to prison, allegedly because he violated the terms of his home confinement.  He didn’t violate any such terms, but the real reason was that Cohen is writing a book.  Yes, another book is in the making, this one about Cohen’s time working for Trump, and given his closeness to Trump, the number of times he paid off prostitutes and whatever other messes he bailed Trump out of, this one should be fascinating!

It is beyond concerning that Trump and his royal henchmen can have a person sent to prison on a lie.  U.S. District Judge Alvin Hellerstein agreed and ordered that Cohen be released from an upstate federal prison by 2 p.m. Friday after being tested for coronavirus at the facility, where he’s been held in a solitary setting since being rearrested July 9th. He will then return to home confinement in Manhattan.

On Wednesday, the U.S. House of Representatives voted to remove Confederate statues from the Capitol Building.  I applaud this movement … in fact, I applaud it until my hands have blisters!  The one statue residing in the Capitol that has always made me grind my teeth is that of former Chief Justice Roger B. Taney who authored the Dred Scott decision in 1857, which declared African Americans couldn’t be citizens.  Taney’s bust would be replaced with a statue of Thurgood Marshall, the first African American Supreme Court justice.

Other statues the House voted to bring down include Charles Aycock, John C. Calhoun, and James Paul Clarke.  Now, before some … or one in particular … get on their high horse, this is NOT about what you call “cancel culture” … the history remains, sadly un-erasable … but there is no purpose to be served by honouring these ‘men’ with a notable place in the Capitol.  They were not honourable men and while they will always have a place in the history books, they do not deserve a place anywhere else.

But, before you get too excited, it is highly unlikely that this House bill, even though passed by members of both parties, will make it into law.  You see … Mitch McConnell holds the power of life and death over bills coming in from the House, and it’s unlikely he will even allow it onto the floor of the Senate.  In the unlikely event that he did, and that the Senate passed it, it is even more unlikely that the imposter in the Oval Office would sign it into law.  Still … my fingers are crossed.

Ever notice that when you hear of political corruption, it’s usually tied to the name of a republican?  Take ol’ Duncan Hunter … you remember him, right?  He’s the one who used campaign funds to pay for his children’s school tuition, their school lunches, sports equipment, and to pay to take his pet bunnies on a plane with his family.  By the way … he was sentenced to 11 months in federal prison in March.

Well, two more are on the radar this week.  There’s one who I’d love to see brought down, for he has been a juvenile pain-in-the-rear ever since he first came to Congress from the state of Florida.  He is none other than Matt Gaetz, who is accused of sending tens of thousands of taxpayer dollars to a limited liability company linked to a speech-writing consultant who was ousted from the Trump administration, in direct conflict with House ethics rules.  He also used taxpayer money to set up a television studio in his father’s home in Niceville, Florida, which Gaetz uses when he appears on television. Taxpayers foot the bill to rent the television camera, and the private company that built the studio — which Gaetz refuses to identify — takes a fee each time he appears on air.  No estimate on what this has cost us yet. 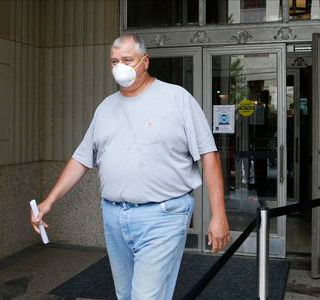 And then there is the Speaker of the Ohio House of Representatives, Larry Householder, who was arrested by the FBI in a $60 million bribery scheme!  Ol’ Larry is also a republican, not surprisingly.  Prosecutors accused Householder and four others of spinning up a “criminal enterprise” that collected $60 million in dark money from a struggling energy company.  Ohio Governor Mike DeWine, one of the few republicans for whom I have a modicum of respect, has called on Householder to resign.

Mind you that I’m not saying there aren’t corrupt democrats in our government, for surely there are.  But the worst of the stench seems to emanate from the Republican Party of late, starting at the very top and working its way down through the ranks.

35 thoughts on “Time For Snarky Snippets!”