Lieutenant Colonel Alexander Vindman served this nation with honour and integrity for 21 years.  A career U.S. Army officer, he served on the National Security Council as the director for Eastern European, Caucasus and Russian affairs, as the Russia political-military affairs officer for the chairman of the Joint Chiefs of Staff, and as a military attaché in the U.S. Embassy in Moscow.  He received a Purple Heart medal for wounds he received from an IED attack in the Iraq War in 2004.  In October 2019 he testified before the United States Congress regarding the Trump–Ukraine scandal.  On February 7th, two days after the U.S. Senate let the nation down, failing to uphold their oaths and failing to convict Trump on well-proven impeachment charges, Lieutenant Colonel Vindman was fired, or rather “reassigned within the army” and in a tacky gesture, escorted off the White House grounds.  Last month, he resigned, citing untenable circumstances of bullying and harassment by Trump and his sycophants.  What follows is an OpEd he wrote that was published this morning in The Washington Post.  Lieutenant Colonel Vindman is a man of honour and integrity who served this nation well. 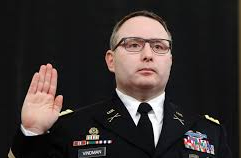 After 21 years, six months and 10 days of active military service, I am now a civilian. I made the difficult decision to retire because a campaign of bullying, intimidation and retaliation by President Trump and his allies forever limited the progression of my military career.

This experience has been painful, but I am not alone in this ignominious fate. The circumstances of my departure might have been more public, yet they are little different from those of dozens of other lifelong public servants who have left this administration with their integrity intact but their careers irreparably harmed.

A year ago, having served the nation in uniform in positions of critical importance, I was on the cusp of a career-topping promotion to colonel. A year ago, unknown to me, my concerns over the president’s conduct and the president’s efforts to undermine the very foundations of our democracy were precipitating tremors that would ultimately shake loose the facade of good governance and publicly expose the corruption of the Trump administration.

At no point in my career or life have I felt our nation’s values under greater threat and in more peril than at this moment. Our national government during the past few years has been more reminiscent of the authoritarian regime my family fled more than 40 years ago than the country I have devoted my life to serving.

Our citizens are being subjected to the same kinds of attacks tyrants launch against their critics and political opponents. Those who choose loyalty to American values and allegiance to the Constitution over devotion to a mendacious president and his enablers are punished. The president recklessly downplayed the threat of the pandemic even as it swept through our country. The economic collapse that followed highlighted the growing income disparities in our society. Millions are grieving the loss of loved ones and many more have lost their livelihoods while the president publicly bemoans his approval ratings.

There is another way.

During my testimony in the House impeachment inquiry, I reassured my father, who experienced Soviet authoritarianism firsthand, saying, “Do not worry, I will be fine for telling the truth.” Despite Trump’s retaliation, I stand by that conviction. Even as I experience the low of ending my military career, I have also experienced the loving support of tens of thousands of Americans. Theirs is a chorus of hope that drowns out the spurious attacks of a disreputable man and his sycophants.

Since the struggle for our nation’s independence, America has been a union of purpose: a union born from the belief that although each individual is the pilot of their own destiny, when we come together, we change the world. We are stronger as a woven rope than as unbound threads.

America has thrived because citizens have been willing to contribute their voices and shed their blood to challenge injustice and protect the nation. It is in keeping with that history of service that, at this moment, I feel the burden to advocate for my values and an enormous urgency to act.

Despite some personal turmoil, I remain hopeful for the future for both my family and for our nation. Impeachment exposed Trump’s corruption, but the confluence of a pandemic, a financial crisis and the stoking of societal divisions has roused the soul of the American people. A groundswell is building that will issue a mandate to reject hate and bigotry and a return to the ideals that set the United States apart from the rest of the world. I look forward to contributing to that effort.

In retirement from the Army, I will continue to defend my nation. I will demand accountability of our leadership and call for leaders of moral courage and public servants of integrity. I will speak about the attacks on our national security. I will advocate for policies and strategies that will keep our nation safe and strong against internal and external threats. I will promote public service and exalt the contribution that service brings to all areas of society.

The 23-year-old me who was commissioned in December 1998 could never have imagined the opportunities and experiences I have had. I joined the military to serve the country that sheltered my family’s escape from authoritarianism, and yet the privilege has been all mine.

When I was asked why I had the confidence to tell my father not to worry about my testimony, my response was, “Congressman, because this is America. This is the country I have served and defended, that all my brothers have served, and here, right matters.”

To this day, despite everything that has happened, I continue to believe in the American Dream. I believe that in America, right matters. I want to help ensure that right matters for all Americans.