Good Saturday morning and welcome to the weekend!  I’m so excited about my Saturday plans I can barely contain myself!  After my shower and morning routine, I’m gonna throw a load of laundry in the washer, then spend the next 15 hours in front of my computer!  Whoo Hoo!!!  {Sarcasm very much intended}  I hope you have fun plans, as well!

I was at a loss for a topic for Saturday Surprise … I trolled my usual sources, but nothing jumped out at me, and I was ready to give up, but I also didn’t feel like writing yet another political post just at the moment.  And so, I let my mind meander for a while and came up with something …

While I’ve never had any desire to become an architect, I’ve always been fascinated by different {read weird} buildings, so I went in search of, and found, some weird buildings I thought might make for a fun way to kick off the weekend.

This is a residential complex located in Darmstadt, German, called the Waldspirale, which translates to “forest spiral” in English.  On the outside, some of its most notable features are the tower that resembles Russian onion domes, an absence of straight lines and sharp colors, and the multicolored painting of the building.  I was more intrigued by the appearance of uneven layers, as if someone had tried to squish it like a sandwich!

This is the Krzywy Domek (Crooked House) in Sopot, Poland.  It is actually part of the Rezydent shopping center. It was designed by Szotynscy and Zaleski, who were inspired by fairy tale drawings.  It reminds me of pictures I’ve seen of some buildings in San Francisco after the earthquake of 1906 … or it makes me think of a huge giant coming along and just squeezing the building from the sides. 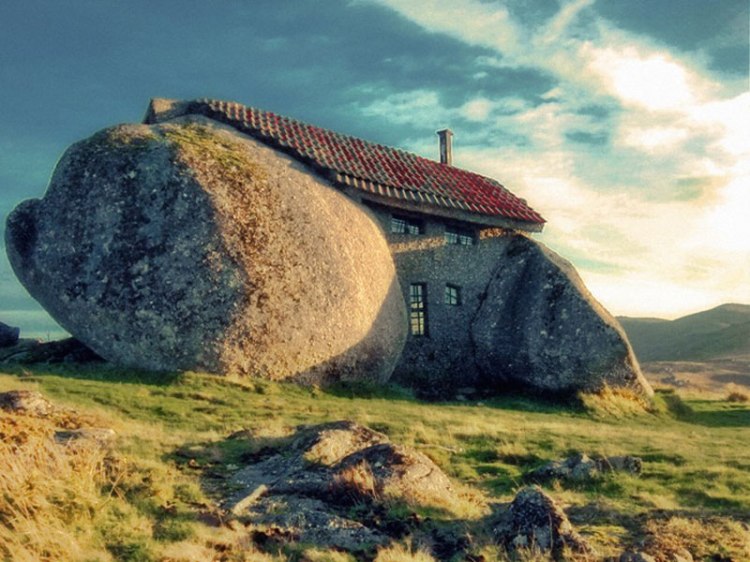 Here we have the Casa do Penedo, located in the Fafe Mountains of Portugal.  This is a private home built between 4 large boulders. The property includes many amenities, including a fireplace and swimming pool.

I think this one, the Lotus Temple in Delhi, India, isn’t weird so much as beautiful … it somehow reminds me of the Sydney Opera House.   Its renowned flower-like shape has won it numerous architectural rewards. 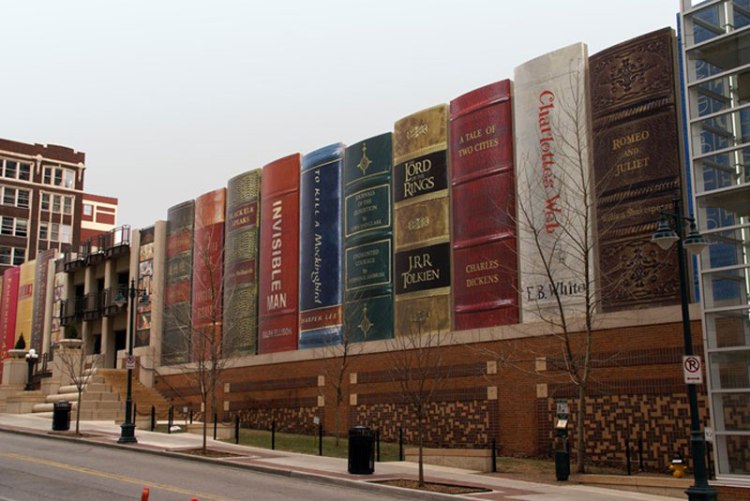 Needless to say, this one captured my attention.  It is the Kansas City Library in Kansas City, Missouri.  The “community bookshelf” runs along the south wall of the parking garage. The book spines measure 25′ by 9′ and reflect a variety of reading interests, all suggested by Kansas City readers.  Several of my readers are huge “Lord of the Rings” fans, so you’ll be pleased to note that is one of the books featured on the wall!

What you see here is a Low-Impact Woodland House located in Cynghordy, Wales, in the United Kingdom.  Using only £3000, a chisel, a chainsaw and a hammer, Simon Dale and his father-in-law raised this cozy, woodland home up from the ground in just four months.  Built in 2005, the house is set into the earth, giving it the appearance of a hobbit home.  The design allows for increased energy-efficiency, keeping the house warm in the winter and cool in the summer.

This is the one building in today’s collection that is not yet built, but is still in the planning stages.  Still, I thought it interesting enough to include.  It is a Rotating Tower that is to be built in Dubai, United Arab Emirates, and once completed, all 80 floors will rotate independently, spanning 360 degrees every 90 minutes.  While that may not be a dizzying speed … you might never know which direction to walk when you exited the building at the end of the day!

The Nautilus House in Naucalpan, Mexico, is shaped like a sea shell (on first glance I thought it was a snail shell).  Built by architect Javier Senosiain, it was constructed to be a livable home and features smooth surfaces, spiral stair cases, and natural paintings.  According to Senosiain it is both earthquake-proof and maintenance-free. 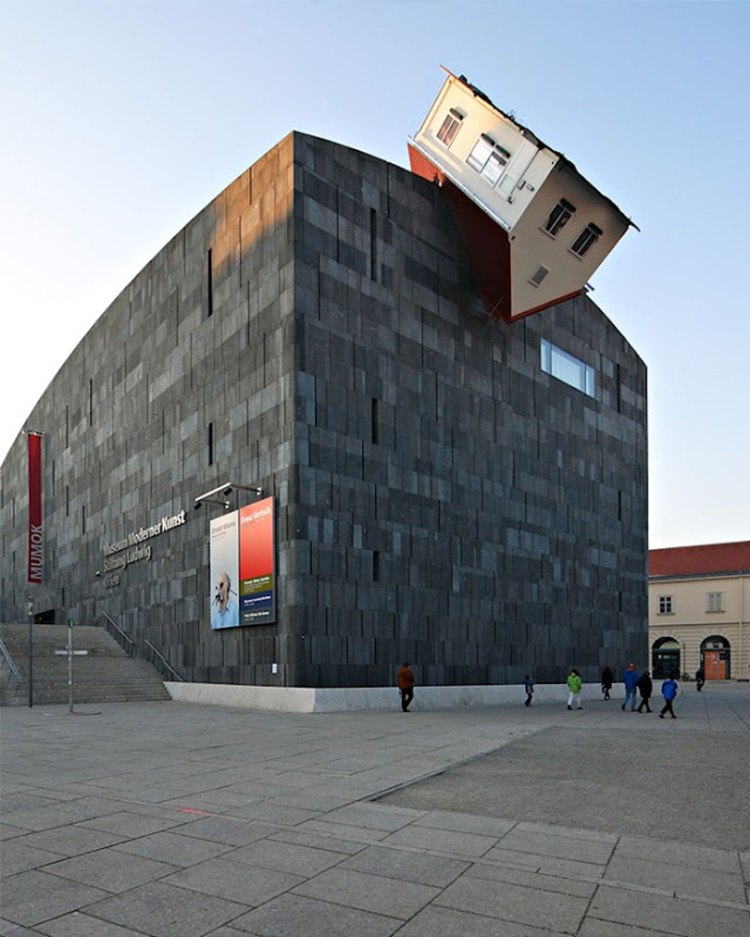 The Museum Moderner Kunst in Vienna, Austria, appears to have had a house dropped on it!  Somehow this reminds me of “The Wizard of Oz”!  Artist Erwin Wurm is known for his unusual, sometimes humorous, and occasionally puzzling work. While his “House Attack” piece could fall into any or all of those categories, it’s at the very least intriguing. It was completed in 2006, but I read that the house atop the museum has since been removed.  Still, I thought it deserved inclusion here.

This is the Bibliotheca Alexandrina in Alexandrina, Egypt.  It is a major library and cultural center located on the shore of the Mediterranean Sea. It resembles an angled discus or giant sundial. It was created to reincarnate the famous ancient library of Alexandrina, which held the largest collection of manuscripts in the world but burned down in the 3rd century. 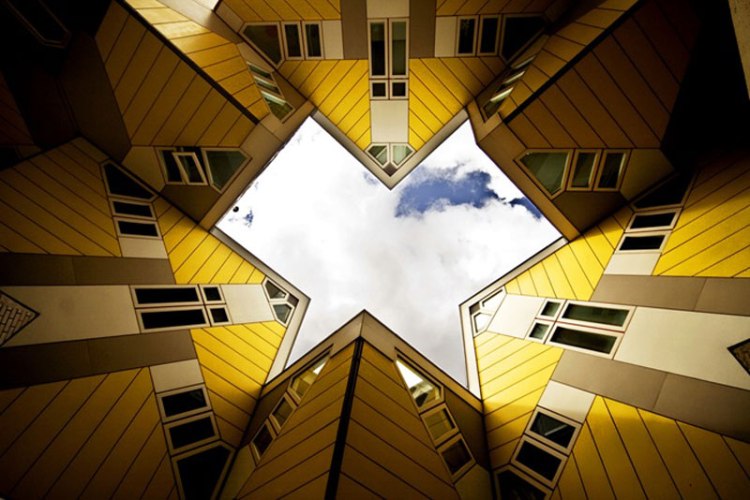 Kubus Woningen, or Cubic Houses, are located in Rotterdam in the Netherlands.  They were constructed by architect Piet Blom in the 1970s after he was asked to solve the dilemma of building houses on top of a busy road.  With 38 regular units and two “super-cubes”, each slanted cubic residence is held up by a hexagonal pillar, some of which are located atop a pedestrian bridge spanning the four-lane Blaak Street. While it solved the urban planning problem, it created some highly odd residences in the process.  Although each cube house contains about 1,080 square feet of floor space, only a quarter of this, approximately 270 square feet, is usable due to the sharp angles of the architecture. Even worse, this 270-square-foot area is spread out across four floors. After entering on the ground level, residents must take a narrow staircase to reach the first floor, a tiny, triangle-shaped room which features a living room and kitchen. A flight of stairs up are two bedrooms and a bathroom, and the top floor is a small free space, typically used as a garden.

Wonderworks is a local attraction in Pigeon Forge, Tennessee, in the Smoky Mountains. It’s primarily an entertainment center focused on science exhibits. It was designed to look as if the building was picked up by severe weather and dropped upside down on an existing building.  And once again, I am reminded of the “Wizard of Oz”!

The header image is Casa Terracota, or Ceramic House, located in a mountain village of Colombia.  It is known by locals as the Flintstone House.  The house is is entirely built by hand with clay and parched in the sun, freely shaped to look like a cottage.

I hope you enjoyed this brief tour of a few of the worlds oddest buildings.  Now, have a wonderful weekend, my friends!