It should come as no surprise that this year’s wildfires in California are even more devastating than those of 2019.   The wildfires, largely sparked by lightning strikes and exacerbated by very dry conditions, have now burned through more than a million acres.  The fires have claimed hundreds of homes and threaten tens of thousands more, forcing more than 100,000 to flee amid a coronavirus pandemic that vastly complicates evacuation decisions. 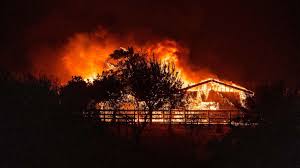 At least six are known dead, and hundreds yet unaccounted for.

The fires started early this year, on August 14th, with literally thousands of lightning strikes setting off the dry timber.  In just over a week, the California blazes have charred more than 1 million acres, according to Cal Fire, more than tripling the area burned during a typical fire season (a little more than 300,000 acres). The area burned is larger than the state of Rhode Island.

California has seen a significant uptick in large-wildfire activity because of a combination of climate change, land-use practices and other factors. Large fires have also increased across other parts of the West, which climate studies tie to human-caused climate change that alters the timing of precipitation, makes summers hotter and vegetation drier, and leads to more days with extreme weather that enable fires to spread rapidly.

And just when California, which is, by the way, part of the United States, most needs help, the person at the head of the federal government is doing what he does best … mocking, denigrating, and being an all-round ass.  You may remember that at the height of last year’s wildfires, Trump admonished California Governor Gavin Newsome, saying he should have “raked the forest floor”.  Well, he’s at it again …

“I see again the forest fires are starting. They’re starting again in California. I said, you gotta clean your floors, you gotta clean your forests — there are many, many years of leaves and broken trees and they’re like, like, so flammable, you touch them and it goes up. Maybe we’re just going to have to make them pay for it because they don’t listen to us.”

WTF is this “them”???  There is no “them”.  It is we , not ‘them vs us’!  This country is called, in case Señor Trump has forgotten, the United States, and California is one of those states!  In fact, with nearly 40 million people, it is the most populous state in the country! I am so sick and damned tired of Trump’s ignorance costing lives in this country!  It was, in part, his rollback of nearly every environmental regulation on the books that has added to the massive problem of human-caused climate change, so in one sense, Trump himself has helped create this nightmare scenario.  He damn sure hasn’t done anything to help the state of California … or any other state, for that matter!

Trump’s suggestions have prompted head-scratching from experts who say his prescriptions — more raking, less water released into the ocean for environmental purposes — suggest he does not understand the science of wildfires. Critics also point out that most of California’s wildlands are federally managed.

It should be noted that the president is elected by the people of all 50 states.  It should further be noted that he takes an oath to “… faithfully execute the Office of President of the United States, and will to the best of my Ability, preserve, protect and defend the Constitution of the United States.”  That oath does not say he will only be responsible and accountable to people living in states that voted for him, or that have a republican governor, or a republican majority, or that “like” him!  The good people of California pay taxes the same as the people of Florida, Mississippi, Michigan and New York!  And in return, they are treated by the federal government as one of those “shithole countries” Trump refers to!

It is time for our government to step up to the plate and help the State of California.  If Trump won’t do it, then Congress damn well better.  Off your ass, Mitch McConnell, and do something good for once in your life! 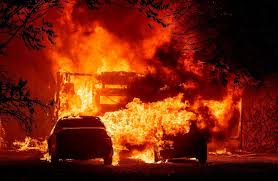