Conspiracy theories abound, more than any other time I can remember, except perhaps in the aftermath of 9/11 when the theories ran rampant for a brief time.  WHY??? There is no simple answer, but in part it is because this nation is so divided right now.  In part, we can blame the pandemic that has kept people from many of their everyday activities and given them too much spare time to sit around making up stupid shit.  And in part, we can blame the ‘man’ who sits in the Oval Office and his minions who lick his boots clean on a daily basis.

Take, for example, his statement on August 31st during an interview with the nefarious Laura Ingraham of Fox ‘News’:

“We had somebody get on a plane from a certain city this weekend, and in the plane it was almost completely loaded with thugs, wearing these dark uniforms, black uniforms, with gear and this and that.  It’s under investigation right now. But they came from a certain city. And this person was coming to the Republican National Convention. And there were like seven people on the plane like this person, and then a lot of people on the plane, to do big damage.”

Perhaps Trump has missed his true calling … perhaps he should be a writer of Science Fiction, for that story is as far from reality as I am from the planet Jupiter!  There was no such plane, no such ‘thugs’, and no such plot.

Or a month ago, when he said …

“And you have people coming over with bags of soup — big bags of soup. And they lay it on the ground, and the anarchists take it and they start throwing it at our cops, at our police. And if it hits you, that’s worse than a brick because that’s got force. It’s the perfect size. It’s, like, made perfect.

And when they get caught, they say, ‘No, this is just soup for my family.’ And then the media says, ‘This is just soup. These people are very, very innocent. They’re innocent people. These are just protesters. Isn’t it wonderful to allow protesting?’”

Bags of soup? Seriously???  How can anybody not question his sanity?

And he has engaged in some of the QAnon conspiracy theories, such as the ridiculous notion that the world is run by a group of Satan-worshiping pedophiles that is plotting against him while operating a global child sex-trafficking ring.

Lately, a few republican members of Congress have begun parroting Trump’s unsubstantiated lies to their own constituents.  (See Keith’s post from yesterday) There is a very real danger in all of this, my friends.  Yes, it’s laughable when he spews some of this, such as bags of soup being used as a tool of the anarchists, but the danger is in the people who listen to him.

Don’t believe me?  Step back, if you will, to October 2018.  It began on October 22nd, when a package containing an improvised explosive device (bomb) was found in the mailbox at the home of Democratic donor George Soros in Katonah, New York.  Over the course of the following week, similar packages were mailed to Hillary Clinton, Barack Obama, Eric Holder, Maxine Waters, John Brennan, Joe Biden, Robert DeNiro, Cory Booker, James Clapper, Kamala Harris, Tom Steyer, and the CNN World Headquarters in Atlanta, Georgia.

The FBI, with assistance from other federal agencies and law enforcement organizations, arrested Cesar Sayoc in Southern Florida.  Sayoc had a history of mental illness and criminal activity, but what prompted him to target the above-named individuals was that after watching Fox ‘News’ and viewing social media platforms, he concluded that Trump’s critics were dangerous, unpatriotic, and evil.  At his sentencing, Sayoc said his idea was “first was how to tone down the liberal left violence platform.” He wrote that he believed prominent Democrats were encouraging violence.  Again, yes Mr. Sayoc has a history of mental illness and violent episodes, but where did he get the idea to send mail bombs to prominent Democrats?  From hearing conspiracy theories and inflammatory rhetoric.

Most of the targets were people who Trump had targeted in his campaign of hate, such as Hillary Clinton, whom he has not shut up about even now, nearly four years after the election in which she beat him, but he walked away with the electoral vote.  John Brennan pointed directly to Trump’s rhetoric, saying that Trump …

“… fuels these feelings and sentiments that now are bleeding over into potential acts of violence … Unfortunately, I think Donald Trump, too often, has helped to incite some of these feelings of anger, if not violence, when he points to acts of violence or also talks about, you know, swinging at somebody from the press or the media.”

Or, consider Kyle Rittenhouse about whom I wrote a few days ago, the 17-year-old punk who took an assault rifle into an area where violent agitators were mingling in with peaceful protestors, and killed two people.  What was his inspiration?  Well, he was a Trump supporter and was in the front row of a Trump rally in January in Des Moines, Iowa.  Just speculation on my part, but I think he absorbed every word Trump said and thought he was carrying out Trump’s wishes.

Brennan’s words are no less true today than they were two years ago.  There are people in this nation who are not deep thinkers, who have little or no moral compass, and who will believe anything they hear from Donald Trump, and some will act on their beliefs.  It makes no difference how many times his conspiracy theories and hate speech are debunked, for they hear only what they choose to hear.  For the ‘man’ who holds the highest office in the nation to engage in such dangerous rhetoric is unthinkable … and yet, that is where we are today.  And sadly, with the easy availability of all sorts of firearms in this country … it is a recipe for major disaster.  Take a look at some statistics regarding people who buy into conspiracy theories.  Note, especially, the 2nd one … 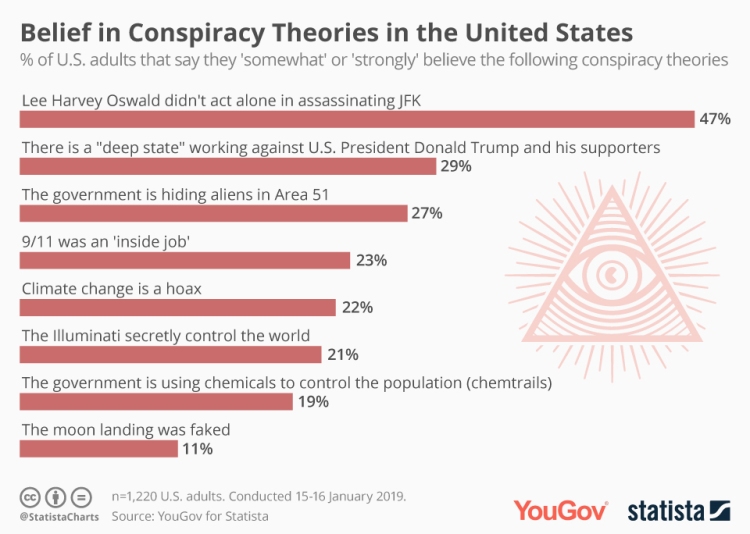 I believe that Trump will dial up his hate speech, conspiracy theories and ridiculous rhetoric even more over the next nine weeks.  We are already seeing enough violence in this nation today … if Trump has his way, what we see today will seem like a day in a kiddie zoo compared to what we will see in October.  We cannot control what people think, but we should have some control over what the ‘president’ says in a public forum.  Never before has it seemed necessary, but it sure as hell does today.  A roll of duct tape for his mouth?

52 thoughts on “Conspiracy Theories Abound … From The Oval Office”