The West Coast of the United States is on fire.  Property is being devoured by the hungry flames, lives are being lost, people are being uprooted with nowhere to go, having lost everything.  Surely the nation’s leader must be on top of this situation, must be worried and seeking help from all venues to assist in the firefighting, yes?  Well, no … not exactly.  In fact, he hasn’t actually mentioned the fires since a few weeks ago when he taunted California’s Governor Gavin Newsom for not … um … raking the forest properly and threatened to cut off funding to the state.

Oh, but the so-called leader has many things to draw his attention away from the disaster that is taking lives and leaving thousands homeless!  He is busy throwing away his campaign money on such foolishness as limos and paying his businesses for his own profit.  And he’s very busy watching Fox ‘News’ for 6-9 hours per day, and denigrating Democrats and thinking up new nasty names for us all, but especially his likely successor, Joe Biden.  Oh, and holding mask-free campaign rallies even in cities that have banned large gatherings.

While the nation burns.  The fires that started in California, then spread to Oregon, have also now spread to Washington State.  Consider, if you will, that those three states account for 16% of the U.S. population total, as well as some of the most beautiful natural resources in the nation.  So, why is the person in the White House ignoring the fires in those three states?  For starters …

All three states have Democratic governors:

Trump seems to have some misguided notion that democrats are not his problem, that his job is only to represent republicans, and especially those who “like” him.  Another reason …

The fires are largely a result of climate change.  Trump can still be heard calling climate change a “hoax” (one of his most favourite words) and during his 45-month tenure, he has done everything possible to add to the destruction of our environment.  He has rolled back regulations … nearly every one that was in place to help repair and protect our planet … he has pulled us out of the Paris Climate Accords, letting down every other nation on earth.  He has signed “executive orders” to virtually destroy the planet by the end of the century.  So, to spend time focusing on the fires would be to open himself to intense scrutiny and criticism in his handling of all environmental issues.

And the third reason, I think, is that to care about what is happening on the west coast would require a certain level of empathy, of compassion, and Trump is an emotional black hole when it comes to caring about any but himself.  Even his children and grandchildren are judged by him and found wanting, they may get financial help from him, but they will never receive love or compassion from him.  So, how can we expect him to care about Jacob and Jamie Hyland who just lost their one-year-old child to the wildfires in Washington, while they themselves both suffer serious burns?

Or Blake Campos who just lost his house and the family farm to the fires.  Or Dewey and Anabel Bratcher who lost not only their home, but all five of their kitties.  Jesus Mendoza, a 42-year-old tree-trimmer who lost his home, truck, car and all of the equipment he uses for his gardening business. Eileen Menzies Gram, age 78, who lost her ranch, all of her possessions and several of her animals in the fire. The list is endless already and there is no end in sight.  Do you believe for one minute that Donald Trump cares about any of these people?  If you do, please contact me, for I can give you a great deal on a bridge – practically new, barely used! 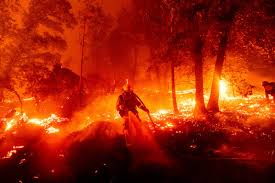 I have a number of friends who live on the west coast, who are potentially in danger of losing their homes, their livelihoods, perhaps even their lives.  In fact, our friend Jeff Marzick (Brookingslib from On the Fence Voters) lives in Oregon, not too far from the site of one of the fires.  Never having been up close to a wildfire, I can only imagine the trauma, based on the pictures I’ve seen.  For the “leader” of this nation to shrug it off and put all his energies into his re-election bid, his hate campaign against the 60% of the people in the nation who do not support him, is beyond unconscionable.  It is criminal.

We learned this week that Trump intentionally downplayed and blatantly lied about the coronavirus pandemic, calling it a “democratic hoax”.  His greed and corruption, his self-dealing, cost thousands of lives in this nation.  And now, we have wildfires out of control and all he can do is shrug his shoulders and … “Nothing to see here, folks, let’s move on to the Trump Family Circus Show”.

When Trump took that oath of office on January 20, 2017, he swore to uphold the U.S. Constitution and he took his office to support all 330 million people in this country.  Not just whites.  Not just males.  Not just Republicans.  Not just people who “like” him, for whatever reason.  But he has let us down … has let us all down.  Congress cannot step up to the plate and fill in the gaps Trump is leaving, because the majority in the Senate are paid to do Trump’s bidding!  Oh sure, We the People pay their salary, but they are paid much more by big corporations and lobbying groups that see an advantage to keeping Trump in office and therefore they care NOT ONE WHIT about the people in California, Oregon, and Washington.  They care NOT ONE WHIT for the Black people who have been killed by police for no reason other than the colour of their skin.  Like that ‘man’ they have sold their soul for, they have only their own self-interests at heart.

To all our friends on the West Coast … keep safe, and know that you are in my heart and thoughts.

34 thoughts on “While The West Coast Burns …”