I thought I might struggle to find a fun thing for Saturday Surprise this week, but then … I discovered that this week the 2020 Wildlife Photographer winners were announced on October 13th, and I knew I couldn’t pass that one up!  The photos are always so great.  This is the 56th year for the contest, and for the first time ever, the awards ceremony was conducted virtually due to the pandemic.  As I told you in last year’s post about the Wildlife Photographer of the Year awards,  this is the largest wildlife photography competition in the world. It is an annual international wildlife photography competition owned by the Natural History Museum.  The first competition was held in 1964, with three categories and around 600 entries. By 2008, the competition had grown to over 32,000 entries from 3100 photographers in 82 countries.  This year, there were over 49,000 entries!

And as was the case last year, I cannot possibly show you all the gorgeous photos, but have picked the ones I thought were the best of the best. You can find more at the Natural History Museum website, as well as information about the photographers and other trivia.

Of course, we must begin with the grand title winner, Sergey Gorshkov, who won with this photo titled The Embrace. 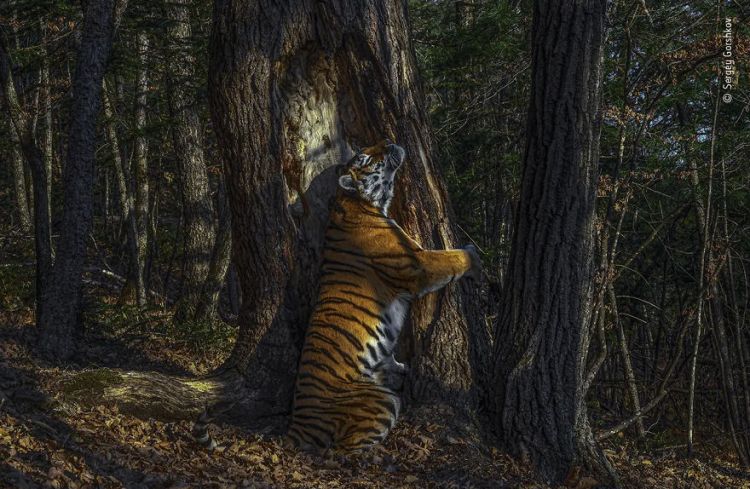 This picture shows the intimate moment an endangered Siberian tiger hugs an ancient Manchurian fir tree to mark it with her scent. It took Russian photographer Sergey Gorshkov over 11 months to capture using motion sensor cameras.  Sergey scoured the forest for signs of Amur, or Siberian, tigers, searching for the best place to set up his camera trap. He knew his chance of photographing one was slim, but his mind was made up. “From then on, I could think of nothing else,” Sergey says. Finally, his dedication paid off: he captured a rare glimpse of this magnificent tiger in its wild habitat.

This year’s Young Photographer of the Year (ages 15-17) award went to Liina Heikkinen of Finland for this photo, titled The Fox That Got the Goose. 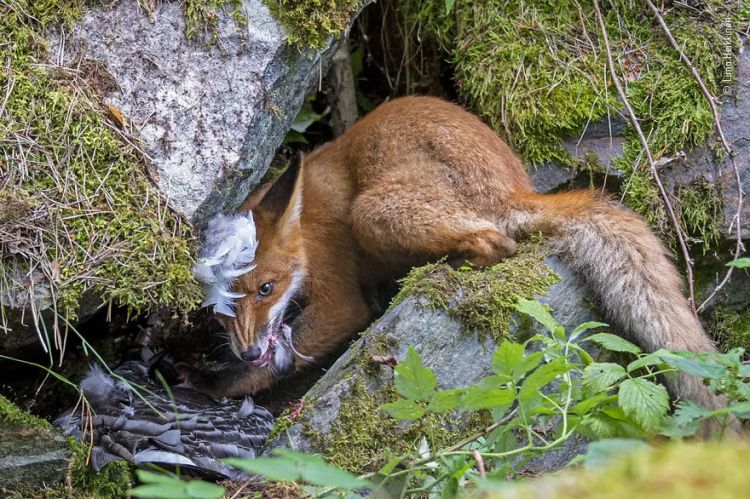 It was on a summer holiday in Helsinki that Liina, then 13, heard about a large fox family living in the city suburbs on the Finnish island of Lehtisaari. The island has both wooded areas and fox-friendly citizens, and the foxes are relatively unafraid of humans. So Heikkinen and her father spent one long July day, without a hide, watching the two adults and their six large cubs, which were almost the size of their parents, though slimmer and lankier. In another month, the cubs would be able to fend for themselves, but in July they were only catching insects and earthworms and a few rodents, and the parents were still bringing larger prey to them. On this evening, the vixen arrived with a barnacle goose. Feathers flew as the cubs began fighting over it.

Frank Deschandol’s original aim was to photograph the vibrant cuckoo wasp. In a sandy bank on a brownfield site near his home in Normandy, France, he located tiny digger wasp burrows suitable for a cuckoo wasp to use. He then set up an infrared beam that, when broken by a wasp, would trigger the super-fast shutter system he had built. Despite the extremely narrow depth of field and tiny subjects, he captured not only the cuckoo wasp but also the sand wasp. 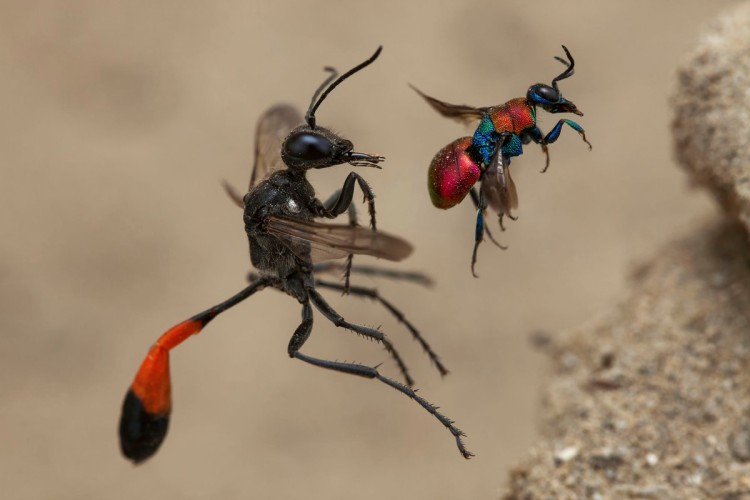 Titled A Tale of Two Wasps, this remarkable simultaneous framing of a red-banded sand wasp (left) and a cuckoo wasp about to enter next-door nest holes is the result of painstaking preparation. The female cuckoo wasp—just 6 millimeters long—parasitizes the nests of certain solitary digger wasps, laying her eggs in her hosts’ burrows so that her larvae can feast on their eggs or larvae. The much larger red-banded sand wasp lays her eggs in her own burrow, which she provisions with caterpillars, one for each of her young to eat when they emerge.

This next one is titled The Pose … I would swear this guy used to be my boss!  This is a photo by Mogens Trolle of a young male proboscis monkey seemingly deep in thought (or asleep). 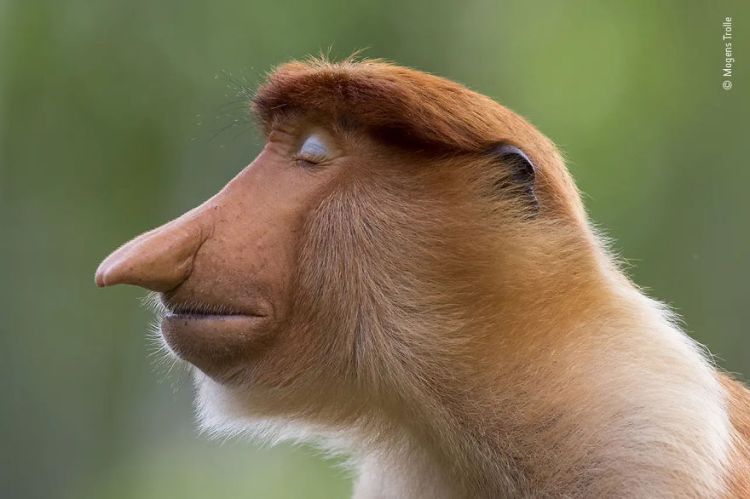 The Village Cat by Masood Hussain 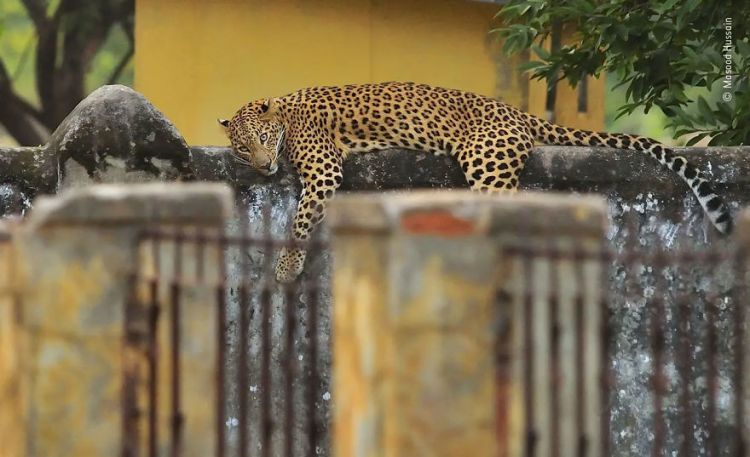 Masood spent the evening tracking a tiger in a nearby forest. Just as he was heading home at sunset, his driver spotted this big cat, lying on the wall of an abandoned village school. 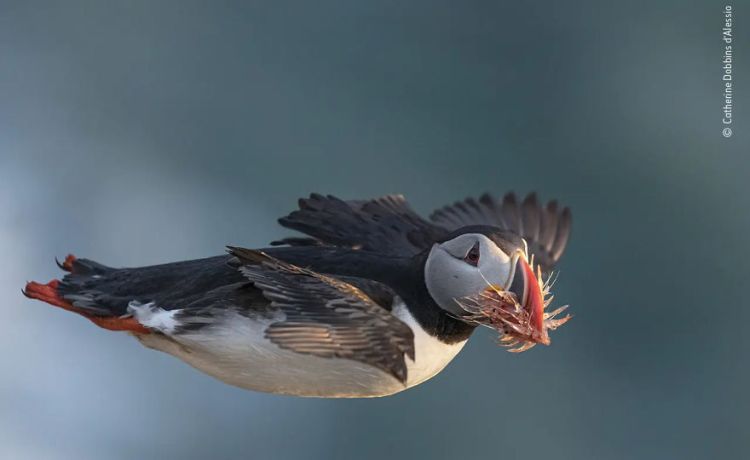 The Perfect Catch by Hannah Vijayan 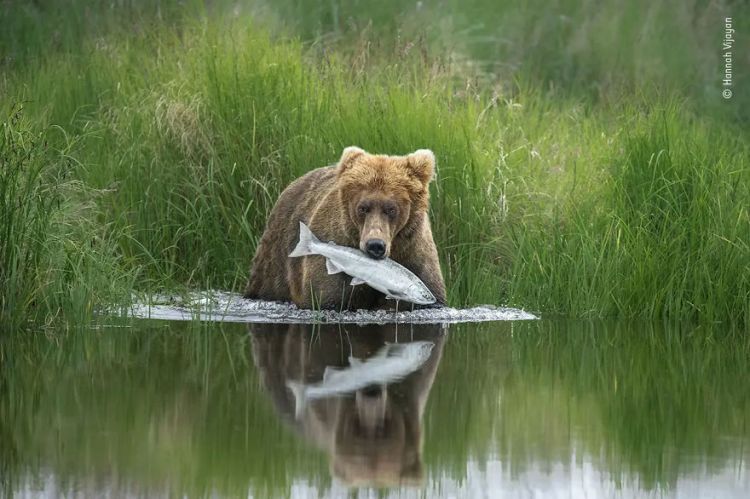 A brown bear pulls a sockeye salmon from the shallows of a river in Alaska’s Katmai National Park. The greatest concentration of bears – and tourists – is around the waterfall at Brooks River, where viewing platforms enable visitors to watch bears catching salmon leaping up the falls.

Young Hannah chose to focus on a quieter scene and a different style of fishing.

Instead of snatching at leaping fish or jumping on them, the female put her head under the water to look for one.  She catches a nutrient-rich sockeye still in its ocean form – before it has developed its reproductive red colour and pronounced jaws.  The presence of the salmon in autumn ensures the bears’ survival through the winter.  Alaskan brown bears are among the world’s largest bears. Males may eat 30 salmon a day and weigh more than 450 kilograms by the end of the summer. Females are smaller and typically weigh a third less.

Eye of the Drought by José Fragozo 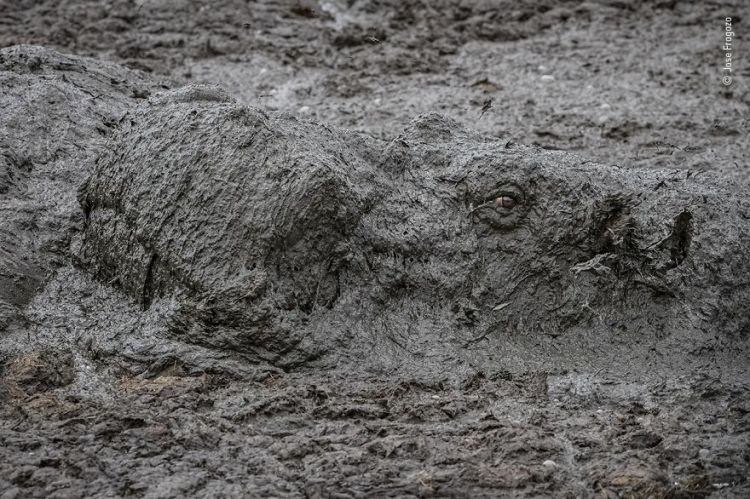 Believe it or not, there’s a hippopotamus in there!  An eye blinks open in a mud pool as a hippopotamus emerges to take a breath – one every three to five minutes.  The challenge for José, watching in his vehicle, was to catch the moment an eye opened.

For several years, José has been watching hippos in Kenya’s Maasai Mara National Reserve, a remnant of the drought-stricken Mara River.  Hippos spend the day submerged to keep their temperature constant and their sensitive skin out of the sun. They emerge at night to graze on the floodplains.

Life in the Balance by Jaime Culebras 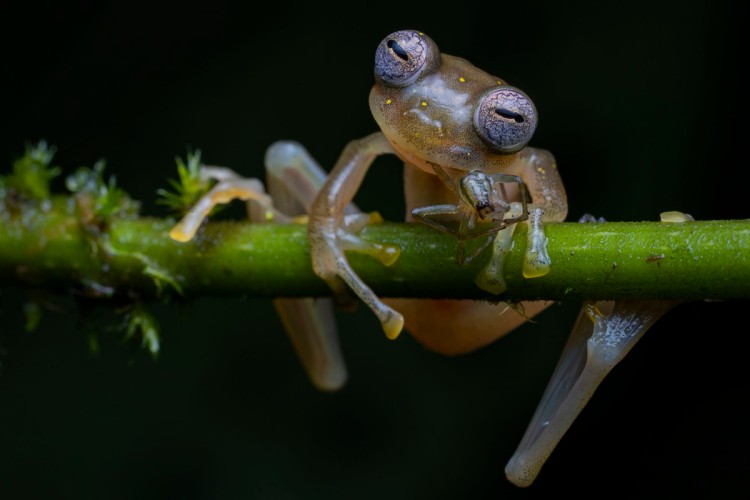 A Manduriacu glass frog snacks on a spider in the foothills of the Andes, in northwestern Ecuador. As big consumers of invertebrates, glass frogs play a key part in maintaining balanced ecosystems. That night, Jaime Culebras’s determination to share his passion for them had driven him to walk for four hours, in heavy rain, through the forest to reach the frogs’ streams in the Manduriacu Reserve. But the frogs were elusive and the downpour was growing heavier and heavier. As he turned back, he was thrilled to spot one small frog clinging to a branch, its eyes shimmering like mosaics. 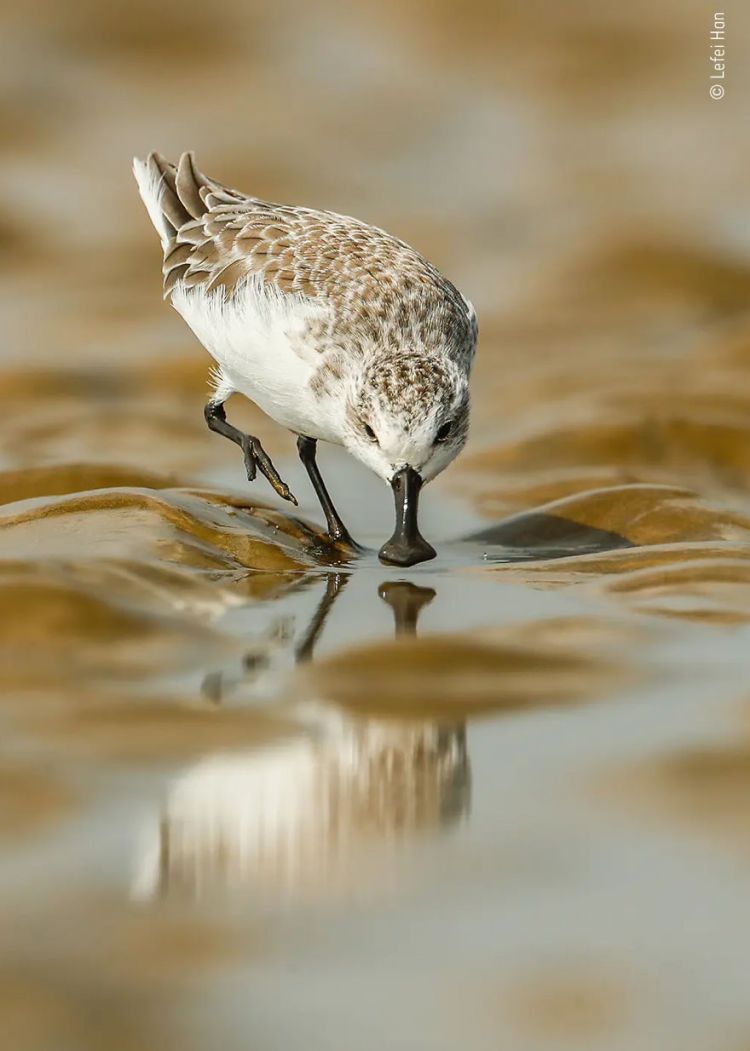 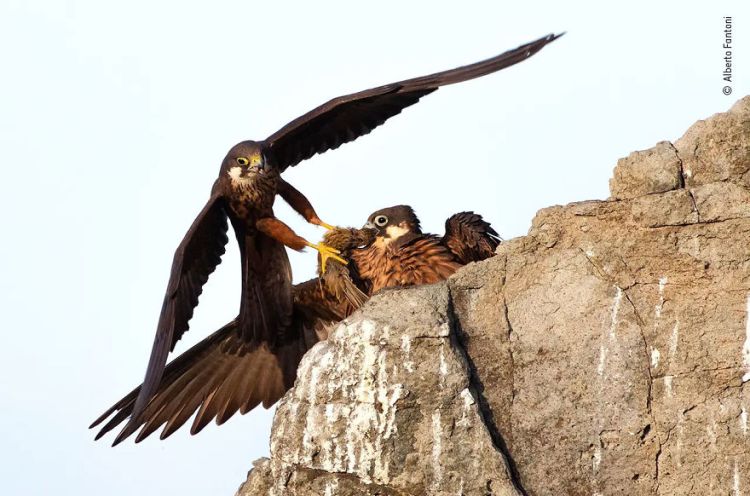 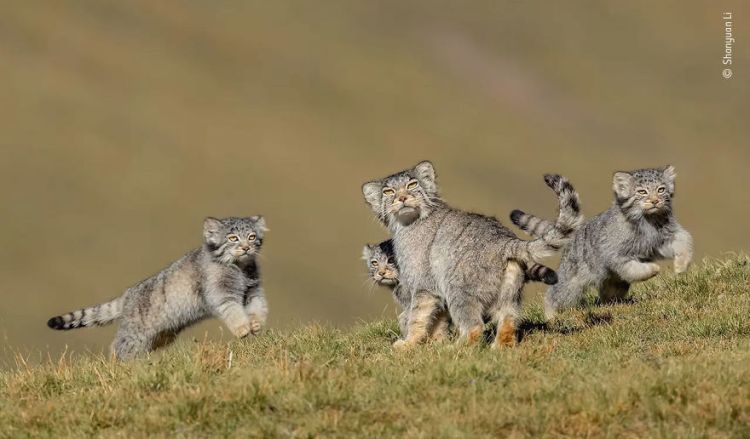 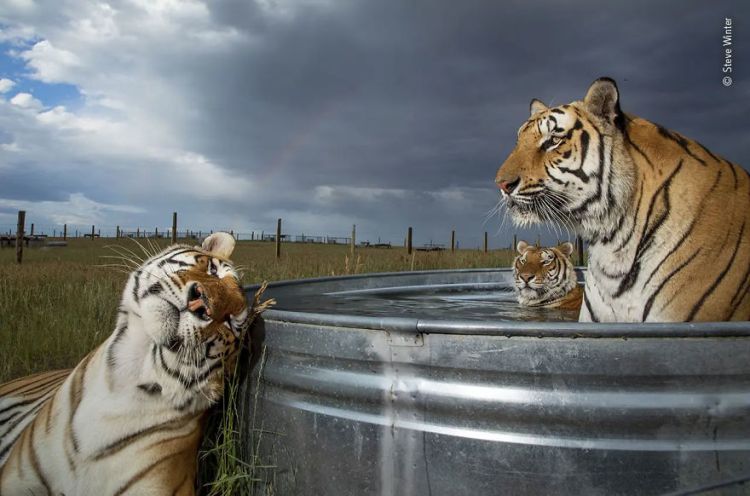 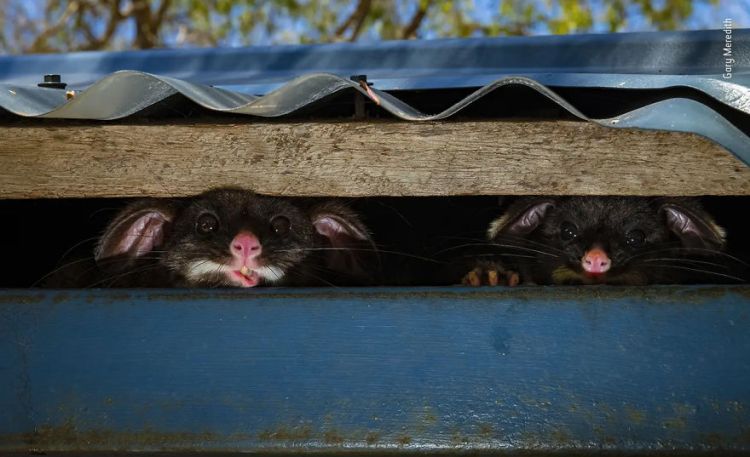 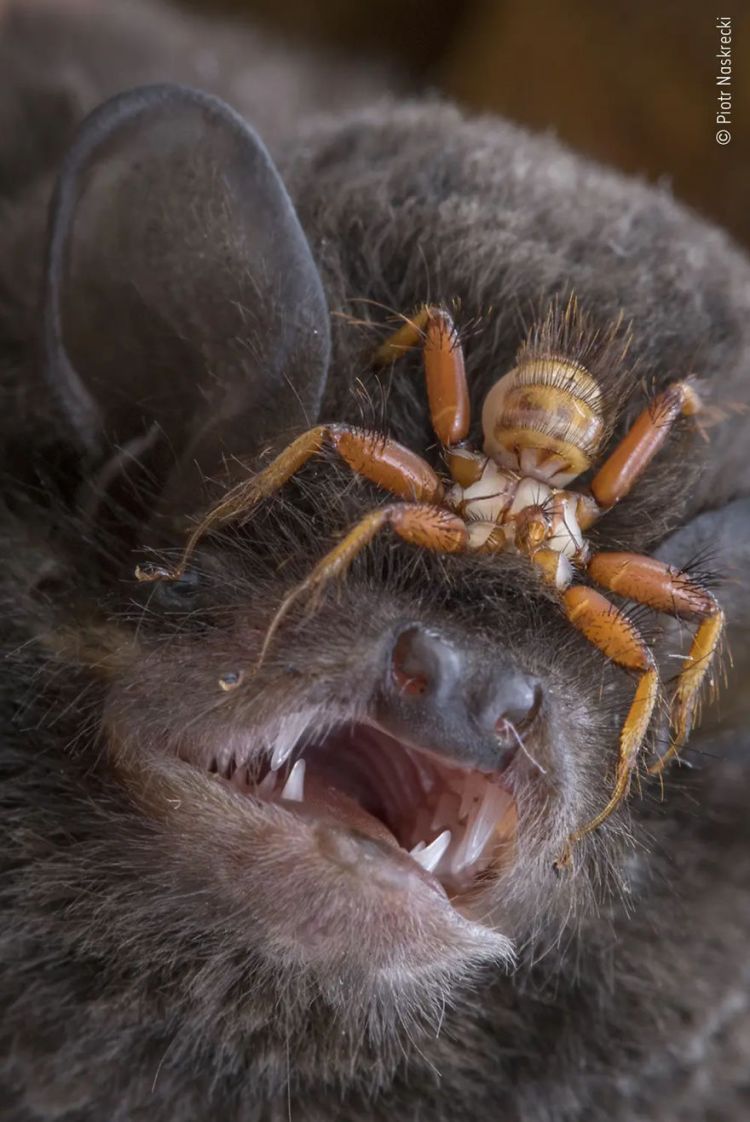 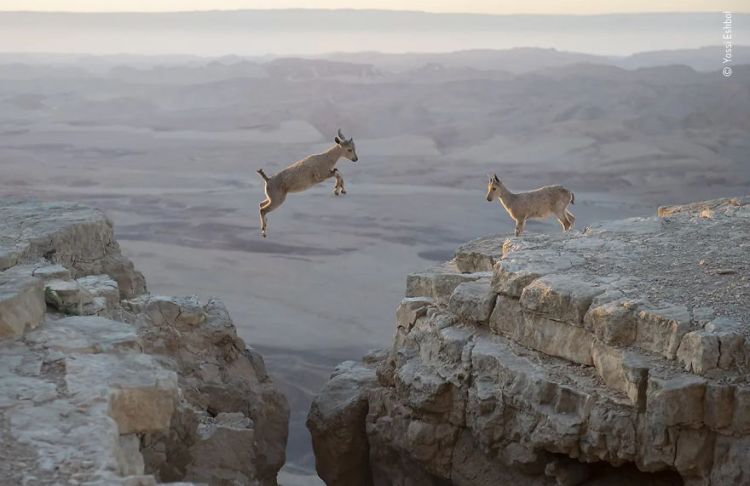 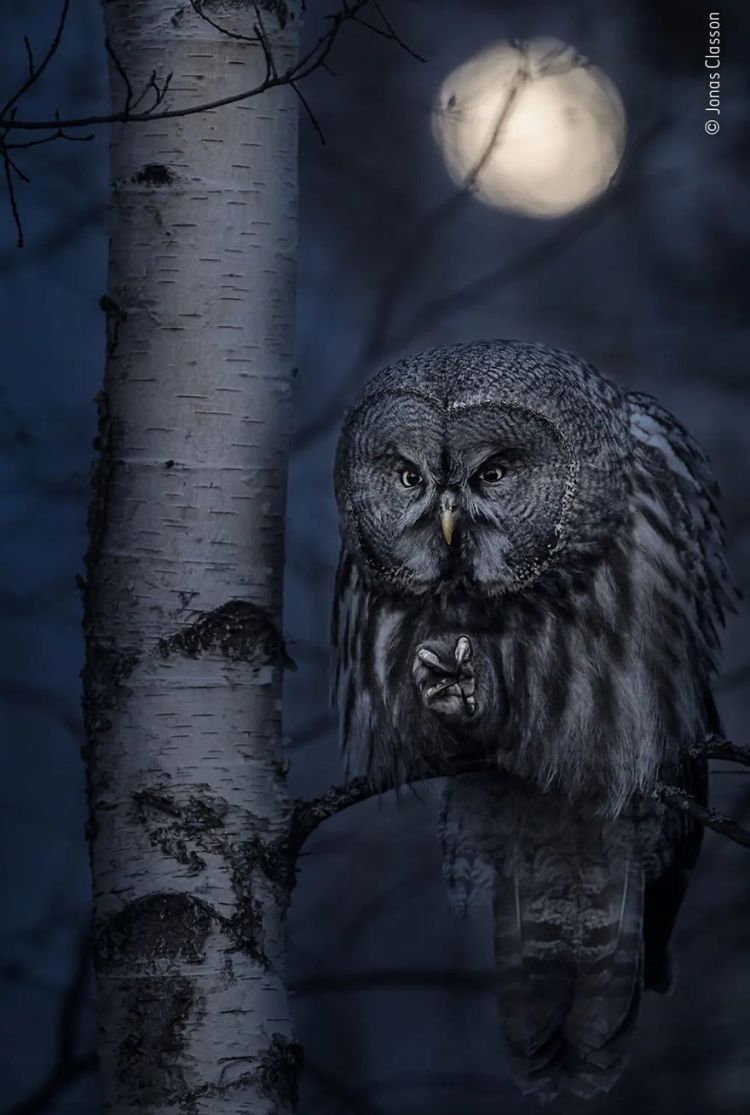 I hope you enjoyed the beautiful photos and critters!  Now, go have a wonderful weekend, but please, my friends, observe every possible safety measure if you’re out in public.