I can barely remember a time when we could go to bed at night without losing sleep wondering what the latest atrocity from the person in the Oval Office would be when we wake in the morning.  I look forward to seeing such a time again soon.  Why … I might even have to retire Snarky Snippets!  Just 49 days to go …

Take Away The Pardon Pen!

Last week, Trump gave the ignoble Michael Flynn an early Christmas gift … a pardon.  Flynn, you may remember, pleaded guilty to a felony count of “willfully and knowingly” making false statements to the FBI.  Flynn was involved in Russia’s interference in our 2016 presidential election and should, like others, be sitting in a prison cell today.  Instead, he is a free man.

With Flynn’s pardon, people began to speculate about who else Trump might pardon before he leaves office at noon on January 20th.  Let’s start with this headline …

Hmmmm … now why would his three eldest children need pardons?  Obviously, they have committed crimes and Trump knows about it, else he would have no reason to even consider pardoning them.  So … as they say, “inquiring minds want to know,” and this inquiring mind is now determined to find out just what Ivanka, Junior and Eric might have done that would send them to prison if not for daddy’s pardon pen.  Oh, he’s also considering a pardon for his son-in-law, the atrocious Jared Kushner.

Junior had been under investigation by Robert Mueller’s team for his role in dealing with the Russians for damaging information against Hillary Clinton, but he was never charged.  Probably should have been but wasn’t.

What all of this says to me is that there has been a great deal of criminal activity taking place behind the closed doors of the White House that is highly likely to be uncovered by the Justice Department once it is no longer led by toady William Barr.  I can guarantee you that none of it was in the best interest of this nation and its people, but rather served to profit Trump and his businesses.

According to the New York Times …

Such a broad pardon pre-empting any charge or conviction is highly unusual but does have precedent. In the most famous example, President Gerald R. Ford pardoned Richard M. Nixon for all of his actions as president. President George Washington pardoned plotters of the Whiskey Rebellion, shielding them from treason prosecutions. And President Jimmy Carter pardoned thousands of American men who illegally avoided the draft for the Vietnam War.

I think that it’s time to put some restrictions on the presidential pardon pen.  Right now, there are none except that the president can only pardon federal, not state crimes.  I think no president should be able to pardon a murderer who has not been proven innocent, or a family member for any reason.  And I certainly don’t approve of this pre-emptive pardoning, where the person is pardoned for crimes that we don’t even know about yet!  This is just ridiculous.

It seems he might be having second thoughts about having been Trump’s toady, now that Trump has obviously lost the election and will soon be on his way out the door, taking all his minions with him.  For the first time since he took office in February 2019, Barr disagreed with Trump in a move that likely infuriated the child in the Oval Office.

Barr’s comments, in an interview with the The Associated Press, contradict the concerted effort by Trump, his boss, to subvert the results of last month’s voting and block President-elect Joe Biden from taking his place in the White House.

Barr told the AP that U.S. attorneys and FBI agents have been working to follow up specific complaints and information they’ve received, but “to date, we have not seen fraud on a scale that could have effected a different outcome in the election.”

Apparently, Trump’s attorneys were none too happy with Barr’s statement, as Rudy Giuliani and his political campaign issued a scathing statement claiming that, “with all due respect to the Attorney General, there hasn’t been any semblance” of an investigation into the president’s complaints.

Other administration officials who have come out forcefully against Trump’s allegations of voter-fraud evidence have been fired.  Would he fire Barr, with only 49 more days in office?  Sure he would!  He’d fire just about anybody, but at this point, I doubt he would find anyone willing to take the job for a period of less than two months.

Respected and respectable lawyers shy away from working for Donald Trump, for they would be risking their reputation, and potentially their license to practice law by working for him.  So, his legal team is not the best and the brightest, but one of his lawyers, Joe DiGenova is beneath even pond scum.

On Monday, DiGenova made an appearance on NewsMax, the latest in right-wing propaganda media, and said this …

“Anybody who thinks the election went well, like that idiot Krebs who used to be the head of cybersecurity, that guy is a class A moron. He should be drawn and quartered. Taken out at dawn and shot.”

Chris Krebs, you may remember, is the former head of election security in the Department of Homeland Security, who stated in no uncertain terms that there was no widespread voter fraud, and that the 2020 election was the most secure in the nation’s history.  He was fired a few days later on November 17th, by an irrational person who has no conscience, no ability to discern fact from fantasy.

Condemnation of Joe DiGenova’s remark about Chris Krebs was swift, including calls for his disbarment and the charge that he was behaving like a “mob attorney”.  No word on Trump’s response, but no doubt he will praise and approve of DiGenova’s comments. 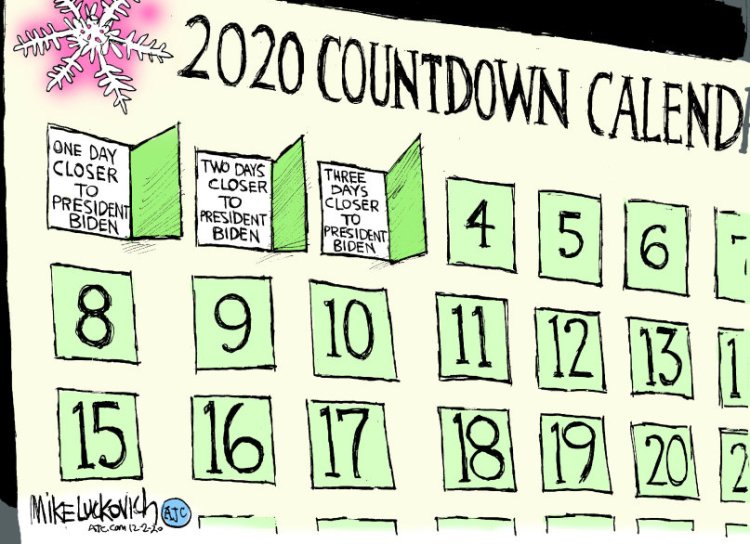 34 thoughts on “Just A Little Bit Of Snarky”