I was going to take a pass on today’s ‘good people’ post, for I find myself with more to do than there are hours in a day.  But, I just couldn’t let you guys down, for I know how much we all rely on the reminders that there are good people out there, quietly going about the business of helping others.

Anthony Gaskins is a UPS driver in Chesterfield County, Virginia.  Now, you can imagine that in this year of pandemic, UPS and FedEx and other delivery service drivers have been overwhelmed.  My friend Herb drives for FedEx and has been working 11-12 hour shifts, 6 days a week, in order to get all those Christmas packages delivered.  Mr. Gaskin has been delivering nearly 200 packages a day!

I am told he is always cheerful, waves and smiles as he passes people on the street, and last Tuesday literally hundreds of people along his route got together and surprised him with a gesture of appreciation.  As he rounded the corner of one street, there were more than 75 cars lining the streets, people holding up signs and cheering for him! 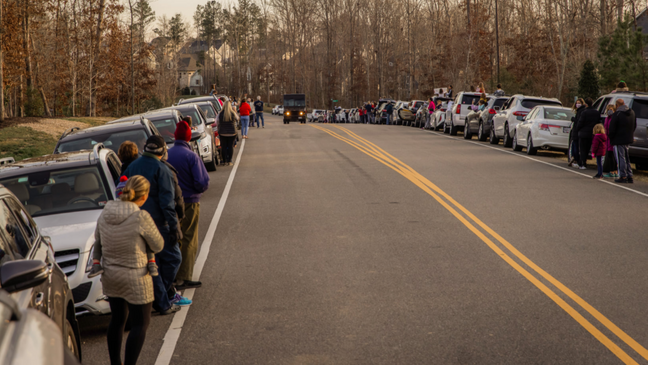 A resident of the community named Patty Friedman wrote in a Facebook post how terribly lonely it was when she moved in during the height of the pandemic, and seeing Gaskins was always the highlight of her day.  Friedman said she wanted to thank him personally, and when she mentioned it to some of her neighbors, she got an overwhelming response that she wasn’t alone. 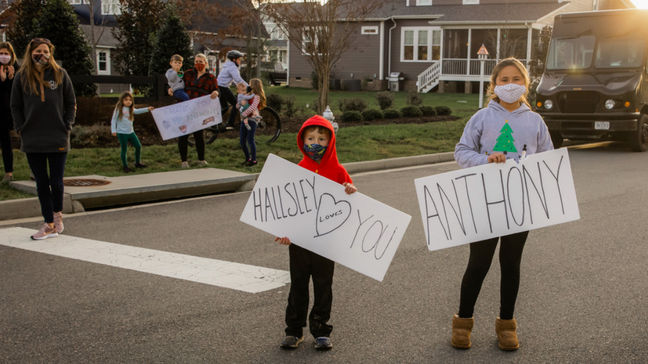 So, members of her community arrived on bikes, on foot, and in more than 75 cars that lined the main road of the community, waiting for Gaskins to appear.  As he turned the corner, children and adults reportedly help up signs, screamed his name, honked their horns, and rang bells. One of his supervisors was even there to present him with a gift.

Gaskins was visibly moved, thanked everyone, and spoke briefly before getting back to work. 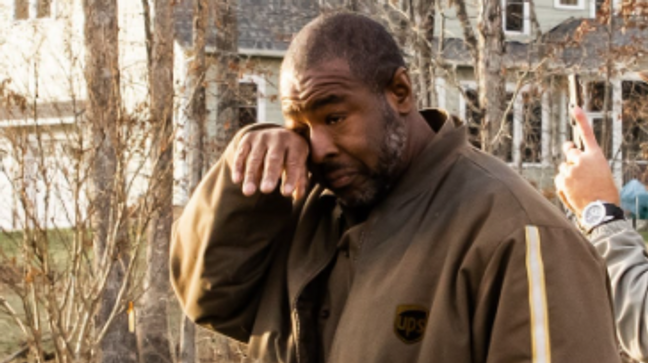 Christine Wheeler of Ottawa, Kansas, walked a total of 12 miles per day to work and back at the Love’s Truck Stop.  She had no vehicle, and really needed the job, for she has two small children to feed.  One day, someone saw her walking to work in the morning and called the Franklin County Sheriff’s Office.  It wasn’t the first time they had received calls about this woman walking along a busy highway … in the cold.

That day, December 9th, Deputy Evan Macklin got the assignment to go check on her and make sure she was okay.  Says Macklin …

“It wasn’t warm out.  We got called out there just to check welfare, to make sure she was OK. I came back to the office and talked to my shift about if there was anything we could do for her.”

Well, a small group of deputies put their heads together and quickly realized that they needed some help, so they put the word out in the community.  Pretty soon generous citizens and businesses stepped up to the plate, and in addition to individual donations, the Sheriff’s office contributed its ‘No Shave November’ funds, and just six days later, on December 15th, they were able to surprise Ms. Wheeler with a van filled with winter coats, food, holiday gifts, two new car seats for her twin boys, a price chopper gift card, the registration for the van and the first year of car insurance along with $200 in cash. 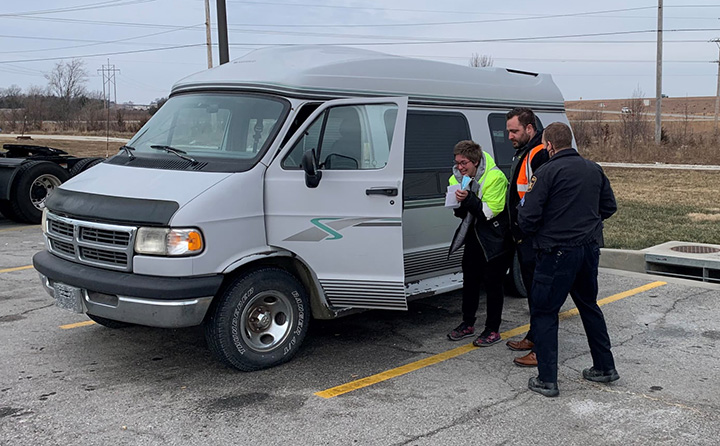 “I can finally like take my kids to the park. I can go shopping, get food. I want to say, ‘Thank you guys so much.’ This means the world to me.” 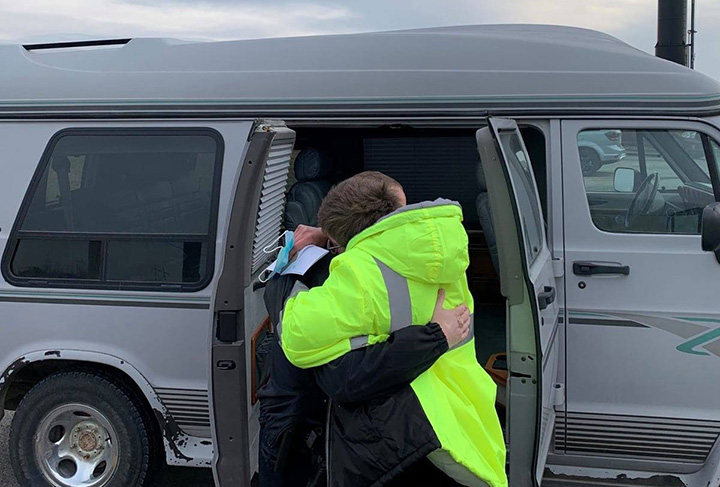 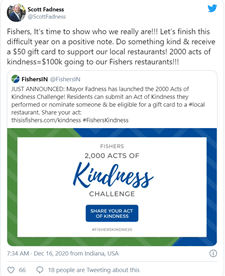 Fishers is giving out $100,000 in gift cards at local restaurants to residents to keep the economy moving during the pandemic. But the $50 rewards are conditional: the recipients must conduct an act of kindness to receive them.  Says Mayor Fadness …

“2020 has been a year that has challenged us as a community, but it has also given us new opportunities to come together.  I’ve seen neighbors helping neighbors, offering to pick up groceries or deliver meals. I have seen our residents step up to support strangers, participating in food drives and creating holiday care packages for those in need.”

Just imagine if every town had a mayor like Scott Fadness!  Why, this nation might actually be a hundred times kinder, gentler.

Residents have been asked to share their kind act, or nominate someone who has performed a kind act, through an online form and on social media. The acts can include gestures like picking up groceries for an elderly neighbor, sending notes of gratitude to co-workers or cleaning snow off a stranger’s car.

It will be interesting to see how this comes out, to read about some of the acts of kindness next month.