Okay, folks, the holidays are over and I for one am more than ready to return to my normal routine.  Let’s get the tree down, pack those decorations away, finish all those leftovers, and get back to whatever passes for ‘normal’ in your household!  My psyche doesn’t handle disruptions well at all.

Sorry, Louie, but the answer is ‘NO’

I told you earlier this week about a lawsuit filed by the ignoble representative from Texas, Louie Gohmert and others, that sought to attempt to pressure Vice President Mike Pence to overturn the results of the election.  The suit was a bad joke, for there were no grounds whatsoever for it, and most every political analyst and constitutional law expert said it was doomed to fail.

Well, fail it did.  Yesterday, Judge Jeremy D. Kernodle of the Eastern District of Texas ruled that Gohmert and other republican lawmakers lacked the proper standing to sue Mr. Pence in the matter.  The real kicker in this ruling, though, is the fact that Judge Kernodle was appointed by Trump himself!  And, to heap insult onto injury in the eyes of Trump, the Department of Justice, representing Pence, had asked the Judge to reject the lawsuit.  I hear that Trump is not a happy camper about these latest developments, and Gohmert claims he intends to appeal, but with only five days before Congress meets to certify Joe Biden’s electoral win, I doubt there is time, nor is there willingness on the part of any judges to open themselves to what would follow if Pence were forced to take away the people’s will.

Score one for justice. 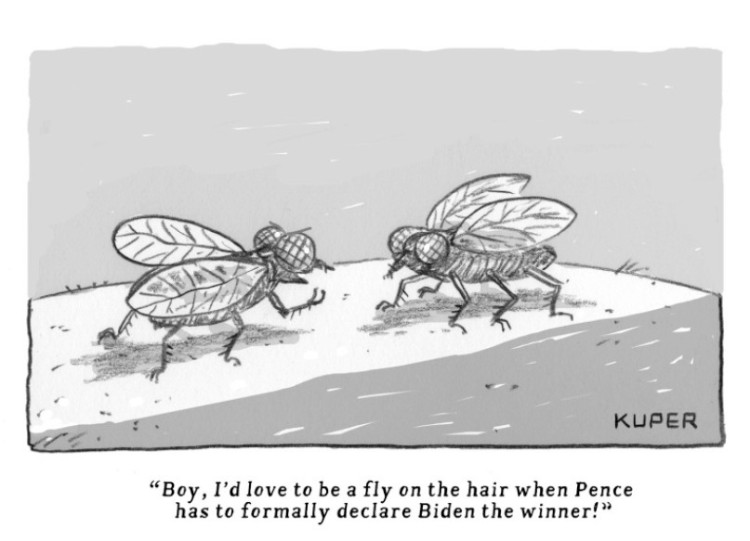 They never give up, do they?

This just in, as I was writing the above snippet – several republican senators, led by Ted Cruz of Texas, have signed a statement saying that they will refuse to certify the electoral votes for Joe Biden unless a ten-day audit is performed.

More grandstanding, and a move that is destined to fail, for frankly the votes of these idiots are not requisite for a majority vote to certify the results of the Electoral College.  The democrats have a majority in the House of Representatives, and in the Senate, a number of republicans have already acknowledged Joe Biden’s win and will not align themselves with these spoiled brats.  The ones who have signed the statement are:

And, of course, good ol’ Josh Hawley from Missouri said last week that he intends to contest the results.  These people make me literally sick.  They are elected to do what is in the best interest of the people of this country, not to kiss the ass of the idiot-child trying to hold on to the Oval Office by lying, cheating, and bullying.  They are perfectly willing to say to us … “you do not matter, your vote does not matter, we don’t feel one whit of responsibility to you”, for that is exactly what they are telling us!

Their efforts will fail, on Wednesday, January 6th, Joe Biden’s electoral win will be certified and two weeks later, on January 20th, Joe Biden will be inaugurated the 46th President of the United States.  However, what they ARE doing is demoralizing us, keeping our angst stirred, and slapping us repeatedly in the face.  They are putting their own desires and fortunes ahead of ours, and THAT is simply wrong!  I hope the people of those states begin demanding that they be held accountable, either through impeachment or other means.

He’s stabbing his own in the back

As you all know, the Georgia runoff races for the U.S. Senate are in just three days.  Polling is erratic, but one thing is for certain, that both races are looking to be remarkably close.  So, what does Trump do to help his side?  He basically tells republican voters not to bother, that the elections are “illegal and invalid”.  This is one time that I’m applauding his false claims, for if he convinces republicans to stay home on Tuesday, so much the better for the nation.

In addition, he has been verbally attacking Georgia’s Governor Brian Kemp and Secretary of State Brad Raffensperger, both republicans, for the past month over their honesty in certifying the election in Georgia.  He claims they owe it to him to overturn the voice of the people, but both Kemp and Raffensperger remember that their loyalty is to the people of Georgia, not a two-bit madman who is attempting to hijack the election.

Last month, Trump attended a rally in Georgia (did he do any real work in 2020?) where he proceeded to spend most of his time lamenting his own situation, making his tiresome false claims about voter fraud, and yadda yadda yadda.  He did Loeffler and Perdue, the two republican candidates, no favours then, and he is doing them none now.  He’s scheduled to attend another rally on Monday, the day before the elections, where he is likely to further hurt their cause.  I suppose we ought to thank him for the help he is giving the two democrats, Warnock and Ossoff!

16 thoughts on “Snarky Snippets For A Dreary Grey Day”