By now, you all know of the chaos that has reigned all afternoon in the Capitol, halting the electoral certification process and causing turmoil throughout the nation.  Our friend Keith often reminds me that name-calling gets us nowhere, wins no arguments.  While I both respect and agree with him, today my fury, my rage, have taken over and I shamelessly call Donald Trump and every single person who voted for him in November stupid jackasses. 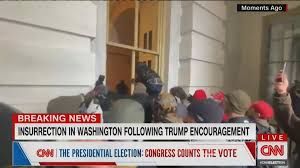 The hordes, incited by none other than the Idiot-in-Chief, have vandalized the Capitol building, broken windows, shot at least one person, injured multiple police officers, and say they are planning to “occupy the Capitol through the night”.  Were it my decision, I’d instruct police to arrest every last one of them, and then go find Trump and arrest him, too.  Yes, my friends, I am angry … I am furious.

Meanwhile, Trump remains, as of this writing, largely silent, for this was his plan all along.  One of his aides, noting the frustration of his staff at his negligence, said …

Trump has been urged by many to publicly order the mob to disperse … instead, he told them “We love you”.  WHAT THE SAM HELL????

Every one of the people protesting in Washington today should be in jail.  Don’t ever again ask me not to say that people who voted for Trump are stupid, because they ARE.  They are stupid, they are evil, they are terrorists every bit as much as was Osama bin Laden!

I have a few questions about today, starting with WHERE THE HELL were the police?  The masses that descended on DC today were no surprise … we’ve heard Trump ‘inviting’ them, egging them on, for weeks now!  Even I was smart enough to know these terrorist bozos would show up with their guns, so where were the cops???  Second question is … what would have happened if this had been a Black Lives Matter protest rather than a pro-Trump protest?  Think long and hard about that one, my friends, and then try to convince me that this isn’t a racist, bigoted nation.

President-elect Joe Biden, who WILL be inaugurated as President in two weeks, was more controlled than I am in his statement a bit ago …

“At this hour, our democracy’s under unprecedented assault. Unlike anything we’ve seen in modern times. An assault on the citadel of liberty, the Capitol itself. An assault on the people’s representatives and the Capitol Hill police, sworn to protect them. And the public servants who work at the heart of our Republic… Let me be very clear. The scenes of chaos at the Capitol do not reflect a true America. Do not represent who we are. What we’re seeing are a small number of extremists dedicated to lawlessness. This is not dissent. It’s disorder. It’s chaos. It borders on sedition. And it must end now.

Threatening the safety of elected officials, it’s no protest. It’s insurrection. The world’s watching. Like so many other Americans, I am shocked and saddened that our nation, so long the beacon of light and hope for democracy, has come to such a dark moment.”

This is how a president speaks, my friends.  This is the president I am looking forward to having in just under two weeks.  But meanwhile … the FBI, Homeland Security and every law enforcement agency must work day and night to ensure that the chaos, the tragedy of today is not repeated on January 20th as Joe Biden takes office!  If needs be, if possible, we need to invite NATO security forces to protect not only Biden, but every member of Congress and the Supreme Court, for Trump and his band of idiots have proven there is no low to which they won’t sink.