Actions have consequences, and there is a price to pay for lying and cheating.  Some members of the Republican Party are learning that lesson the hard way.

The 147 Republican lawmakers who opposed certification of the presidential election this month have lost the support of many of their largest corporate backers — but not all of them.

The Washington Post contacted the 30 companies that gave the most money to election-objecting lawmakers’ campaigns through political action committees. Two-thirds, or 20 of the firms, said they have pledged to suspend some or all payments from their PACs.

Meanwhile, 10 companies said only that they would review their political giving or did not commit to take any action as a result of this month’s events.

The split between company responses shows how U.S. executives are still grappling with the recent political bloodshed and its ripple effects across the corporate landscape. The attempted insurrection at the Capitol on Jan. 6 led to calls for companies and wealthy donors to disavow support for lawmakers who continue to propagate dangerous myths about the election and has prompted a broader rethinking of the role of PAC giving among the nation’s top companies.

And remember ol’ Josh Hawley who attempted to overturn the election and even egged on the terrorists who invaded the Capitol with murder on their minds?

It seems that Hawley had a big fund-raiser planned for the weekend of February 12-15.  The event was to be held at the Loews Portofino Bay Hotel in Orlando, Florida, and was billed as a “fun-filled, family-friendly Orlando weekend event”.  Tickets were being sold for between $1,000 to $5,000, depending on the size of the group.

But Loews said that the fund-raiser had been called off after the deadly riot at the Capitol, which many Democrats and Republicans have blamed in part on Mr. Hawley and other members of his party who supported Trump’s efforts to stop the certification of Joe Biden’s victory.

“We are horrified and opposed to the events at the Capitol and all who supported and incited the actions. In light of those events and for the safety of our guests and team members, we have informed the host of the Feb. fund-raiser that it will no longer be held at Loews Hotels.”

But that wasn’t the only blow Mr. Hawley suffered as a result of his actions.  Apparently he has written a book titled, “The Tyranny of Big Tech” that was scheduled to be published by Simon & Schuster in June.  Simon & Schuster have now canceled the publication, saying …

“We did not come to this decision lightly. As a publisher it will always be our mission to amplify a variety of voices and viewpoints: At the same time we take seriously our larger public responsibility as citizens, and cannot support Senator Hawley after his role in what became a dangerous threat.”

Hawley responded by calling the decision ‘Orwellian’ and threatening a lawsuit.

So yes, consequences do have actions even for people in high-ranking government positions.  I applaud those companies that have the fortitude to do the right thing, to hold these ignoble members of Congress to account for their actions, and I hope more will do the same.  We need to take a closer look at the companies with whom we do business, find out who they give their money to, and boycott those who put profit so far ahead of people that they are endangering the nation.

Just one other thing …

“The mob was fed lies. They were provoked by the president and other powerful people. And they tried to use fear and violence to stop a specific proceeding of the first branch of the federal government which they did not like.” 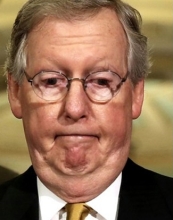 I guess that since Trump now has less than 24 hours in office, McConnell isn’t afraid of the repercussions any longer.  Mitch McConnell, even though he will no longer be the Senate Majority Leader, has quite a bit of influence over the other Senate Republicans, so my hope is that his words, his views, will translate into a conviction in the impeachment trial.

And some have asked me, “why bother?” with the impeachment trial, since Trump will be out of office in 21 hours anyway.  Well, the primary reason for the ‘bother’ is that if Trump is convicted on the impeachment charge, he will never again be able to hold public office.  No run for president in 2024.  This is important, for he damn near destroyed this country over the last four years and we cannot have another four years of him … ever!

20 thoughts on “The Price For Perfidy”