If there was ever a person on whom oxygen was wasted, it is Marjorie Taylor-Greene.  My ornery she-cat has more values and is better deserving of a seat in the United States House of Representatives than Ms. Greene.  I have a laundry list as long as my arm of Ms. Greene’s crimes against this nation, against humanity. 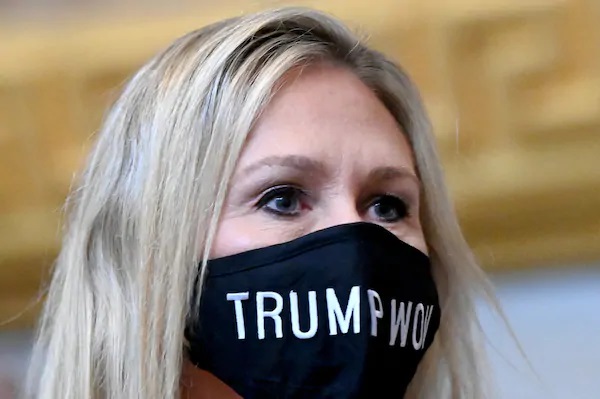 Less than 28 hours after President Joe Biden took his oath of office, Ms. Greene filed impeachment charges against him!  The charge?  “Abuse of power by enabling bribery and other high crimes and misdemeanors.”  Don’t ask me what the hell she’s even talking about … no sane person could possibly figure out what happens inside this … woman’s … head.  She even had the unmitigated gall to post a video of herself bragging about filing the false charges!

She filed these articles “on” him based on the falsehoods that Donald Trump and his sycophants claimed his son, Hunter Biden, had done, all of which have been disproven many times over.  Republicans love to say that Democrats were out to get Donald Trump from the start because one of their members, Representative Al Green, a Democrat from Texas, first filed impeachment articles 11 months after Trump took office. Now we have H. Res. 57, “Impeaching Joseph R. Biden, President of the United States, for abuse of power…” — filed on Biden’s first full day in office!  Talk about a double standard!

I’m not concerned about the pseudo-charges Ms. Greene filed, for they won’t fly, but it shows a lack of seriousness of purpose on Ms. Greene’s part, and is yet another wedge driven between right and left, another bit of nonsense that will cause friction.  But, back to Ms. Greene herself … 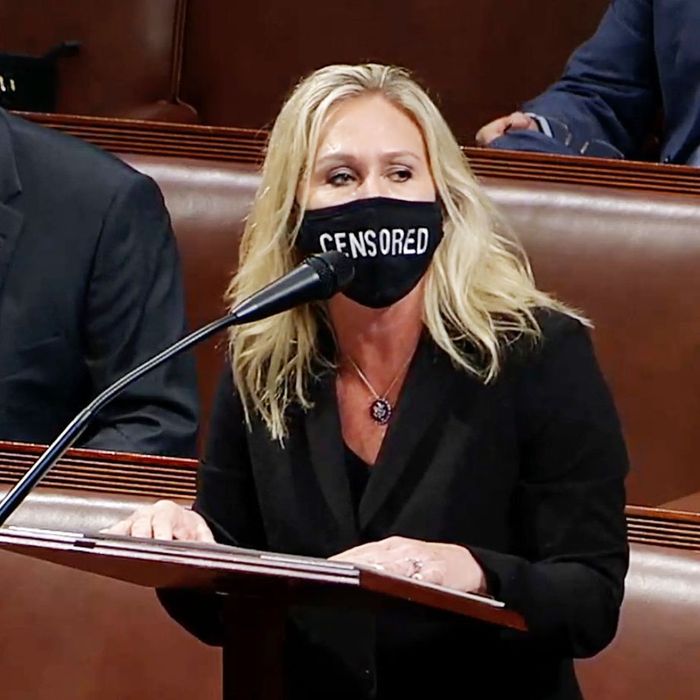 It was two weeks ago that she wore a mask that read “CENSORED” even as she delivered nationally televised remarks from the floor of the U.S. House of Representatives.  Four days later, she was temporarily suspended from Twitter for repeatedly claiming that Georgia’s election results (the same ones that made her a member of Congress) were stolen. Fresh from her Twitter suspension, she declared Biden to be the president of “Communist China.”

She has claimed that the Parkland school shooting was staged (did she take lessons from Alex Jones?), and worse, she has harassed a survivor of the Parkland massacre, David Hogg, accusing him of being an actor paid by George Soros.  She also confronted him, calling him a ‘coward’ and saying he is ‘attacking the second amendment.’

She also claims that the attempted assassination on Ronald Reagan and the 9/11 attacks were “false flag” operations, that they were staged and never really happened.  Among her looniest conspiracy theories are that that former secretary of state Hillary Clinton murdered a child during a satanic ritual and drank her blood.

Greene has endorsed on social media sites the idea of executing Democratic leaders, suggesting getting rid of House Speaker Nancy Pelosi with “a bullet to the head.”

Even House Minority Leader Kevin McCarthy, who has no conscience of his own, said he found some of her remarks to be “deeply disturbing” and that he “plans to have a conversation with the congresswoman about them.”

Representative Jimmy Gomez, a Democrat from California, has announced that he will introduce a resolution to expel Greene from the House, which is something you would think the institution would want to do for its own sake.  At a minimum, Greene should be censured, with the idea that she is on some sort of probation that could lead to being kicked out if she doesn’t clean up her act.  But the predictable outcome, given the general mind-set of Republicans these days, is that such a drive would only elevate her as a martyr and bring wails of “cancel culture” from the prime-time pundits on Fox News.

To the people in Georgia who voted for this trollop, WAKE THE F**K UP!!!  Governance is NOT a game, not something you can throw a pile of dog poop such as Ms. Greene into and stand back prepared to laugh when the flies swarm to it!  This is the future of the nation and the lives of 330 million people you are playing your stupid game with … GROW UP!!!  The filth and garbage you sent to Congress in the form of Marjorie Taylor Greene belongs in a dung heap somewhere, not on Capitol Hill!  And to the other Republicans in Congress:  GET HER OUT!!!  Our nation is torn apart as it is, and you want to let this piece of shit have a voice in Congress?  WRONG!

“The enemy is within the House of Representatives, a threat that members are concerned about, in addition to what is happening outside.”

Damn straight it is.

26 thoughts on “Filosofa Is Boiling Mad …”