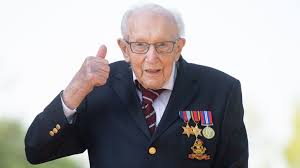 I start today’s post on a sad note.  You’ll remember that I’ve written about Captain Tom Moore, the UK veteran raised tens of millions of pounds for Britain’s health workers by walking 100 laps of his garden last spring.  Sadly, he died this morning after being treated for pneumonia and then testing positive for the coronavirus last month.

Mr. Moore’s own words of optimism come back to us at this time …

“We will get through it in the end but it might take time, but at the end of the day we shall all be OK again… the sun will shine on you again and the clouds will go away.”

Reading of Tom Moore’s death first thing this morning brought a tear to my eye.  He was one of the good people and will be long remembered.  Thank you, Captain Tom Moore, for a lifetime of being a good man … the world needs many more like you.  R.I.P.

The price for a conscience …

Representative Liz Cheney from Wyoming was one of ten Republicans in the House of Representatives who voted to impeach Donald Trump late last year, and now she is paying a high price.  The people of her state are turning against her, and House Minority Leader Kevin McCarthy will be meeting with her this week, possibly planning to strip her of her committee assignments and her position as House Republican Conference Chair, the third highest ranking position in the House Republican leadership.

This is ridiculous!  The woman voted her conscience, saying that Trump “summoned this mob, assembled the mob, and lit the flame of this attack.”   She also called his incitement “the greatest betrayal by a president of the United States of his office.” She was correct on both counts, and yet she is likely to be asked to apologize for both her words and her vote.  Why?  Because the entire Republican Party is populated by cowards who are afraid of the ‘man’ who is no longer in the Oval Office.

I am not a fan of Liz Cheney, but she followed the dictates of her conscience, something the rest of the slime in the Republican Party cannot do because they traded their consciences for a box of Cracker Jacks long ago.  She does not deserve to be censured or otherwise punished, and the people of Wyoming need to wake up and realize that Trump was the biggest threat this nation was facing until just 13 days ago!

And on the other hand …

On the other hand, there is Marjorie Taylor Greene, the pistol-packing idiot from Georgia who now sits in the House of Representatives.  I’ve written before about Greene, so I don’t need to repeat what I’ve already said, but she, like Ms. Cheney, will be having a one-on-one meeting with Kevin McCarthy sometime this week for her racist comments, for supporting the attack on the Capitol on January 6th, for saying she wished death upon some of her fellow members of Congress, and other behaviours not acceptable for a member of Congress.

She is likely to receive a slap on the wrist for her horrendous words and actions, though she could lose her committee assignments.  While I definitely hope she loses her committee assignments, one of which is the Education & Labour Committee … she belongs nowhere near those who make decisions concerning our children’s education!  She would likely demand that firearms training be included in every school’s curriculum!

If McCarthy doesn’t strip her of her committee assignments, the Democrats are likely to do so.  She sits on the following committees …

She has no relevant education or experience in any one of these areas, so I’m not sure where the logic in determining her assignments was.

But what I would really like to see is her expulsion from Congress.  It can and should be done before she causes a disaster, either by shooting someone within the Capitol (she has said she would like to see House Speaker Nancy Pelosi with a bullet in her head), or by turning the House of Representatives into a three-ring circus.

The United States Constitution (Article I, Section 5, Clause 2) provides that “Each House [of Congress] may determine the Rules of its proceedings, punish its members for disorderly behavior, and, with the concurrence of two-thirds, expel a member.”

It would, however, require 70 Republicans to find a conscience and vote to expel Ms. Greene, and we all know there aren’t 70 republicans with courage & conscience in the entire Congress.  Sigh.