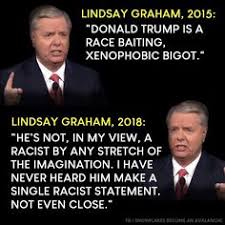 Of all the truly odious beings among the republicans in Congress, one stands out as having a stench that reaches across the entire nation.  No, it’s not Mitch McConnell, though he stinks right enough.  Nor Josh Hawley or Kevin McCarthy – amateurs at the stinkin’ game.  The one that has hit my radar screen no less than six times in the past 24 hours is none other than Lindsey Graham.  Yes, ol’ Lindsey who stabbed his ‘best friend’ John McCain in the back in his last months on earth.  Ol’ Lindsey who can’t seem to figure out which side of the fence he prefers to graze on.

Suddenly, Graham is bigger news than Trump, McConnell, COVID, or Tom Brady!  Let’s take these blips one at a time …

“I’m going to try and convince him that we can’t get there without you, but you can’t keep the Trump movement going without the GOP united. If we come back in 2022, then, it’s an affirmation of your policies. But if we lose again in 2022, the narrative is going to continue that not only you lost the White House, but the Republican Party is in a bad spot.”

If the Republican Party ‘needs’ Donald Trump that badly, then they are already in a bad spot.

And ol’ Lindsey says that Lara Trump, Eric’s wife, is the ‘biggest winner’ of the impeachment trial.  How so?

“The biggest winner of this whole impeachment trial is Lara Trump. My dear friend Richard Burr, who I like and have been friends to a long time, just made Lara Trump almost the certain nominee for the Senate seat in North Carolina to replace him if she runs, and I certainly will be behind her because she represents the future of the Republican Party.”

Um … first of all, Lara Trump is lacking some key qualifications, first and foremost being a brain.  Second, she doesn’t even live in North Carolina!  She, Eric, and their two offspring live in a mansion in Westchester, New York.  Senator Burr was one of the 7 senators who found the courage to vote to convict Trump, and while the Republican Party may be threatening him at the moment, I believe the people of North Carolina have the good sense to applaud his courage, and to see that Lara Trump is a … well, I shan’t say, but suffice it to say she is among the least qualified people for a senate seat.

From Senator Burr’s perspective, with ‘friends’ like Lindsey Graham, who needs enemies?

And, he’s already talking of impeaching Vice President Kamala Harris, less than a month after she’s taken office, because …

“I don’t know how Kamala Harris doesn’t get impeached if the Republicans take over the House, because she actually bailed out rioters and one of the rioters went back to the streets and broke somebody’s head open. So we’ve opened Pandora’s Box here, and I’m sad for the country.”

The only thing we can figure he’s talking about was a tweet by Harris in June, 5 months before Biden and Harris won the November election, and 7 months before she took office.  The tweet simply asked her followers to help Black Lives Matter protestors by contributing to the Minnesota Freedom Fund, a bail fund that assisted jailed protesters during the George Floyd protests.  More likely, the real reason is because she is a woman, and a woman of colour at that, and Lindsey is nothing if not a bigot.

First, Harris did nothing wrong, and second, it was before she was even elected, so … if it’s unconstitutional, as Graham claims, to impeach a president who is no longer in office, surely it’s also unconstitutional to impeach a vice president who wasn’t even elected yet … and who did nothing wrong.  Take a look at what Beau of the Fifth Column has to say about it in this short video …

And finally, Lindsey is put out with his co-conspirator, Mitch McConnell, for his tirade against Trump, even though he hadn’t the courage to vote for a conviction.

“I think Senator McConnell’s speech, he got a load off his chest, obviously, but unfortunately he put a load on the backs of Republicans. That speech you will see in 2022 campaigns. I would imagine if you’re a Republican running in Georgia, Arizona, New Hampshire, where we have a chance to take back the Senate, they may be playing Senator McConnell’s speech and asking you about it if you’re a candidate.” 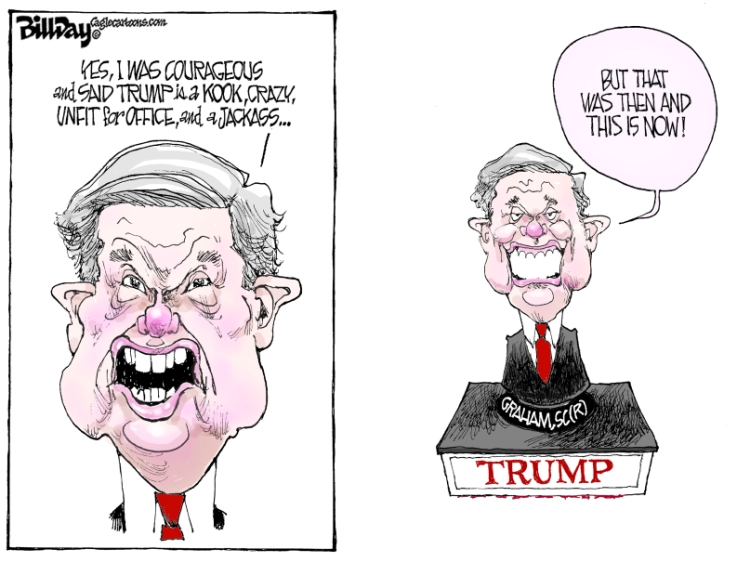 Meanwhile, Lindsey is part of a criminal investigation in Georgia based on his November 13th phone call with Georgia Secretary of State Brad Raffensperger in which Graham asked Raffensperger whether he had the power to toss out all mail ballots in certain counties, much the same as Trump’s later conversation with Raffensperger.

It seems to me that ol’ Lindsey is more concerned with the Republican Party and the 2022 elections than he is with doing the job for which We the People are paying him, don’t you think?  Maybe we ought to stop paying him, or maybe the good people of South Carolina ought to recall him.  If Lindsey is the face or the future of the Republican Party, then they deserve to go down in flames.

21 thoughts on “Lindsey Graham … Ugly Inside and Out”