I have only two snippets tonight … one is great news, the other a horrid example of man’s inhumanity to man.  One warms my heart, the other breaks it.

Let me begin with the good …

While Georgia Governor Brian Kemp was signing a bill into law that would effectively disenfranchise over half the population of Georgia so that they will find it almost impossible to vote in next year’s election, just two states to the north, Virginia Governor Ralph Northam was preparing to sign into law a bill that does the exact opposite … ensures that every person over the age of 18 is able to vote.

The Voting Rights Act of Virginia aims to eliminate voter suppression and intimidation in the state. Virginia is the first state to enact its own version of the federal Voting Rights Act, while 43 other states are working diligently to keep minorities and the poor away from the polls.  Says the governor …

“At a time when voting rights are under attack across our country, Virginia is expanding access to the ballot box, not restricting it. With the Voting Rights Act of Virginia, our Commonwealth is creating a model for how states can provide comprehensive voter protections that strengthen democracy and the integrity of our elections. I am proud to support this historic legislation, and I urge Congress to follow Virginia’s example.”

The legislation would require local election officials to get feedback through public comment or pre-approval from the attorney general’s office in order to make any changes in voting regulations, according to a release from Northam’s office.

It also requires that local election officials provide voting materials in foreign languages as needed. Individuals who experience voter suppression will also be allowed to sue, where any civil penalties awarded will go toward a newly established Voter Education and Outreach Fund.

The bill comes after Northam restored voting rights to 69,000 former felons through executive action earlier this month.  I realize this is a controversial topic, but in my view, the former felon has paid his dues with a prison sentence, and once he gets out, he is a taxpayer and a citizen just like you or me.  If he’s going to pay taxes in this country, then he must have a voice, a vote.

My hat is off to the Virginia State Legislature and to Governor Ralph Northam for doing everything they can to protect the U.S. Constitution and the people of Virginia.  THIS is a fine example of democratic principles at work.

Now for the bad and the ugly …

Byong Choi died on February 24th at the age of 83 as a result of bone marrow tuberculosis.  He had been a hard-working accountant and restauranteur in Orange Country, California for most of his life.  Due to coronavirus restrictions, his funeral was delayed until March 19th.

Read that letter again, please … go ahead, I’ll wait.  What do you feel when you read those hate-filled words?  Broken-hearted?  Enraged?  I felt both, as I’m sure most people with an ounce of human kindness did.

The Seal Beach Police Department in the county has launched an investigation into what it calls an anti-Asian hate crime, but I have doubts the letter-writer will be caught, and if he or she is, they’ll get naught more than a slap on the wrist.  I have no doubt that this was written by one of those white people with a false sense of entitlement who believes their ugly white skin makes them somehow superior, more deserving.

This letter came just days after the shooting in Atlanta, Georgia, where 8 people were murdered, six of them women of Asian descent.  And why … why all of a sudden have fat white people taken a dislike to those of Asian heritage?  Because one person called the coronavirus the “China virus” and the “Kung Flu”, thinking he was being cute or funny.  What he did with those words were to set off a chain of events that has targeted Asian-Americans such as the Choi family, the women in Atlanta, and many others.  What he did was criminal.

“Give me your tired, your poor,
Your huddled masses yearning to breathe free,
The wretched refuse of your teeming shore.
Send these, the homeless, tempest-tossed to me,
I lift my lamp beside the golden door!”

And yet today, hate crimes against those of Asian, Hispanic, or Middle Eastern descent are at an all-time high.  Those people are vilified by a portion of the country’s white population.  Why?  What the hell makes them think they are better than the rest of us?  I regret to inform you that the United States is no longer the nation it once was, is no longer a port in the stormy sea for those seeking asylum or refuge.  It is time we send the Statue of Liberty back to France, for we no longer deserve it. 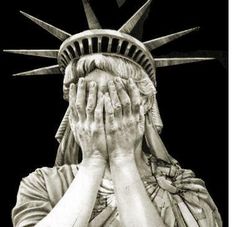