Some weeks putting together the good people post is a challenge, but this week … I have so many good people they are overflowing the bucket!  So, let’s jump right in …

A young man gives back …

Ashis Dhakal immigrated to the U.S., Salt Lake City, Utah, to be exact, at the age of 18 after spending years in a refugee camp in Nepal.  His first experiences were trying, being bullied at school because of both his ethnicity and his Hinduism, but Ashis dealt with it and still wanted to ‘give back’ to the community that was now his.

“I got bullied in school … they called me a terrorist and stuff like that. I practice Hinduism, and in Hinduism, service is very, very important, because, you know, we’re taught to give, and even if you don’t have anything, we try to give as much as we can.”

A few years ago, while working at a local KFC, he met a man who was homeless. While cleaning tables, Dhakal and the man connected, and the man shared his story about how he became homeless.  And all at once, an idea was born.

“One of the necessities he needed was clothes, and so that’s where I got the idea.”

“With that project, I was able to bring so many people together and change so many lives. My biggest ‘why’ in my life is that as a young child, going through poverty, I was in the same shoes as they were in right now. I have a house. I have a computer now. I have a phone. But think about it. Those kids are still suffering. What I can do is better others so that, you know, they can give back to their community.” 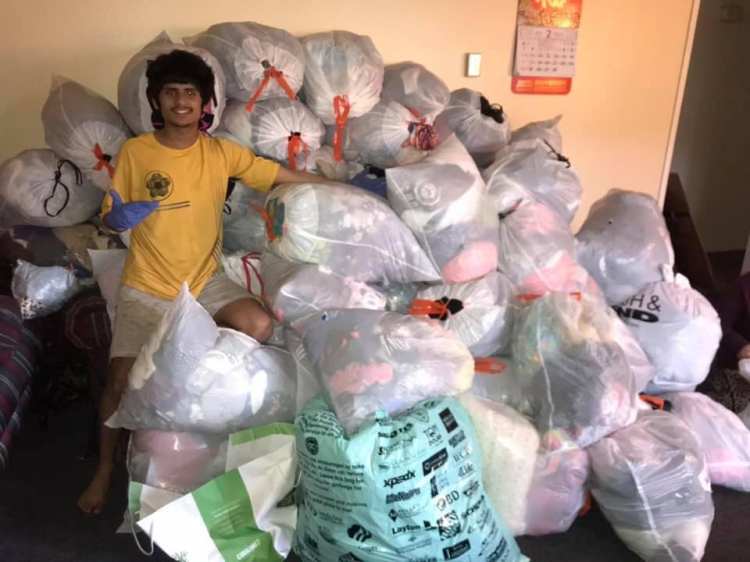 For Dhakal, Ashis Collects Clothes is just a start: In the future, he wants to own a multimillion-dollar business that focuses on giving its money away to help others.  There is more to Ashis’ story and I encourage you to check out his Facebook page (link above) and his story as reported on MSN.

I’d like to introduce you to Pam and Gary Willis. 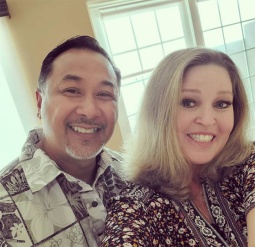 Pam and Gary recently became new parents … to a family of seven children, ranging in age from four to fifteen.  Pam and Gary had already raised one family and were what is known as ‘empty nesters’, with their five children grown and gone from the nest, when one day Pam read an article about seven siblings from San Diego who had lost both their parents in a car crash. They needed a home, but even if they found one, they would likely be separated.  Says Pam …

“In that instant, their sweet smiling faces jumped off of the screen and into my heart. That evening I asked my husband if he’d seen the post. ‘Yes’, he said. ‘We should adopt them’. My heart stopped. ‘We should’, I said. We knew deep inside that this mission was being placed before us. If not us, then who?

They had been in foster care for a year since their parents had been killed in the car accident that they all had miraculously survived.

Who would keep them all together? Who would have the space for them? Who would have the time, and the love, and the patience for their trauma? The answer was clear… we would. Why else did we have a six bedroom house that was about to have it’s last child’s bedroom vacated? Why else would our nest that had raised our first five babies be empty just in time? It was only to make room for our new babies. They were ours from the minute we saw their faces on the news story.” 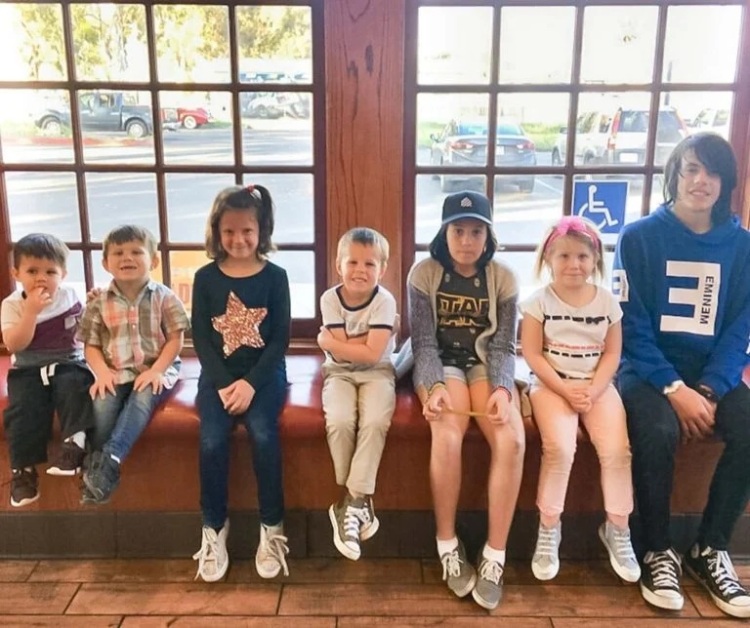 It took time and patience to go through the process, jump through the hoops, and maneuver through the mounds of red tape, but last June Pam and Gary brought the children home.

“We have never looked back since the day we met them and never doubted what we’re doing is the right thing to do. I have noticed how incredibly happy they are and that makes me so happy too, because that’s all we ask for. The oldest of the seven, Adelino, said to me recently, ‘Thank you for giving us this life,’ and there is no other feeling like that.” 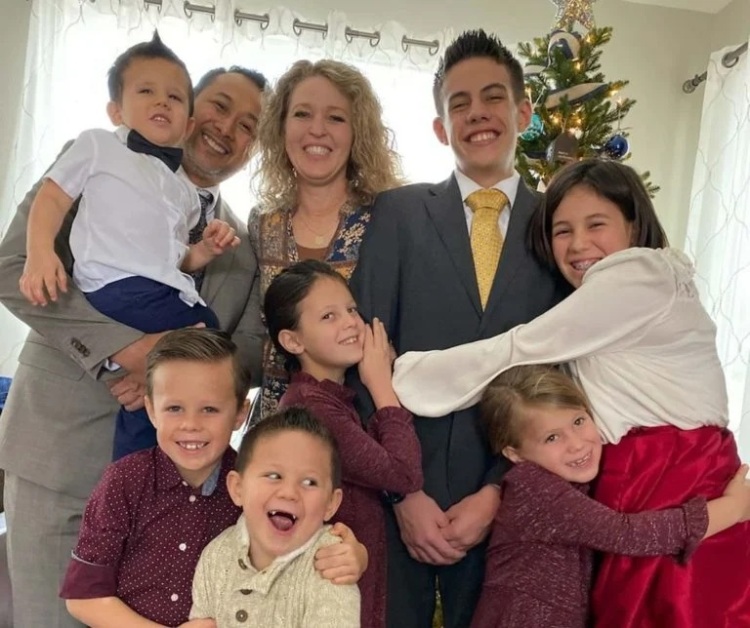 Two thumbs up to these two caring, wonderful people for their courage and their love to these 7 young children. 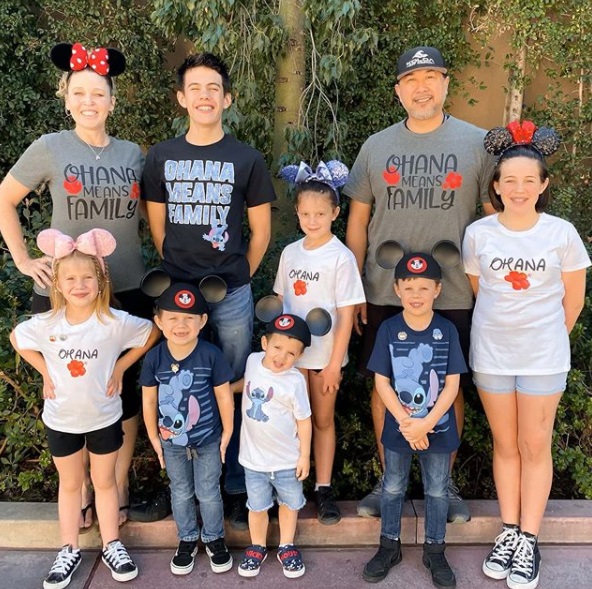 Joshua Morris is a Delaware State Trooper … one with a huge heart!  Periodically, Trooper Morris drops by the local basketball court where the kids hang out and shoots a few baskets with them.  Recently, one of the kids on the court, 9-year-old Ra’kir Allen, shot a video of Morris and the kids having a bit of fun and the video went viral, as they say.

In the video, young Allen can be heard cheering for Trooper Morris …

And it was that enthusiasm, coupled with the comparison to Curry, that inspired Trooper Morris to do what he did.  After speaking with Ra’kir’s mother, he went out and bought Ra’kir a pair of Curry sneakers (trainers for my Brit friends).  You have to see the video to feel the love, the joy, the excitement …

But that wasn’t all … he included a $50 bill in the left shoe.  Now, before joining the force, Trooper Morris earned his Master’s degree in Education, so … he understand kids and says he believes that police should never be strangers in the communities they serve.

THIS, my friends, is what police officers around the country should be doing.  They could earn so much trust and respect if only they gave some, showed they care.  My hat is off to Trooper Joshua Morris!

I had more, but I will save the rest for next week, for it’s late and I’m very tired.  I hope you enjoyed this week’s good people … I certainly did.