Caron Nazario is a lieutenant in the U.S. Army medical corp, serving in Norfolk, Virginia.  Lieutenant Nazario also happens to be Black and Hispanic.  In December, Lt. Nazario purchased a new SUV and on December 5th, he was driving home from work in said SUV when he saw flashing lights behind him.  Lt. Nazario drove to the nearest well-lighted place, a service station, before pulling over.  He did not speed up or in any way attempt to evade the police car behind him, but rather he slowed down, activated his turn signals, and drove for less than a mile before reaching the service station.  He merely wanted, understandably, to get to a well-lighted area.

Upon stopping, Officer Daniel Crocker, with his gun pointed at Lt. Nazario, ordered him out of the vehicle, by which time a second police officer, Joe Gutierrez, had arrived and also had a gun pointed at him.  Lt. Nazario put his empty hands outside the window, as ordered, to show that officers that he was unarmed, and asked them why they stopped him.  A perfectly valid question, under the circumstances.  The officer repeated the order to exit the vehicle, and Lt. Nazario replied that he was “honestly afraid to get out” his vehicle.  Who wouldn’t be, with two officers holding guns on him?  One officer replied, “Yeah, you should be.”  Just a minute later, Officer Gutierrez told Lt. Nazario that he was “fixin’ to ride the lightning,” a slang expression referring to an execution by electric chair.

After some back and forth, with the officers yelling at him to get out of the vehicle, but also to keep his hands outside the window (ever try opening the car door from inside, with your hands outside the window?), and Lt. Nazario asking why he was being stopped, why he was being treated in such a manner, one of the officers sprayed pepper spray into his face through the open window, jerked his door open, sprayed more pepper spray, kicked him in the knees, and slammed him to the ground.

The officer’s given reason for initiating the traffic stop was that he could not see Lt. Nazario’s license plate, which was clearly visible in the back window, as 30-day plates for new vehicles are typically displayed.  The Lieutenant was released without charges, but this week he filed a lawsuit accusing the two Windsor, Virginia police officers of violating his constitutional rights by holding him at gunpoint, suggesting he was facing execution, assaulting him, and illegally detaining him.  The lawsuit states …

“These cameras captured footage of behavior consistent with a disgusting nationwide trend of law enforcement officers, who, believing they can operate with complete impunity, engage in unprofessional, discourteous, racially biased, dangerous and sometimes deadly abuses of authority.”

The lawsuit also claims police threatened to end Nazario’s military career if he spoke out about the incident.  The body cam video clearly shows that the temporary license plate was visible through the window of the vehicle.  The body cam video stopped shortly after Lt. Nazario was slammed to the ground.  Gutierrez wrote in his report that his camera stopped recording after it got “compressed” between him and Nazario during a struggle. Nazario also recorded part of the incident from his cellphone.

I watched the video and found it both chilling and sickening.  The beginning is footage from Nazario’s cellphone that he activated when he realized he had guns pointed at him.

I won’t even bother to ask the question, “If Lt. Nazario had been a white man, would the cops have acted similarly?” for we all know the answer to that.  The better question is, “How do we reform policing?  How do we stop these incidents, often leading to murder, from ever happening?”  I wish I knew the answer, but I DO know what’s going to happen if there are many more incidents like this, if there are many more murders of unarmed black men by police, or if Derek Chauvin is let off with naught but a slap on the wrist … there is going to be blood shed in the streets of America.

We the People are sick and tired of having to fear the very group of people whose duty it is to “protect and defend” us.  We the People have made our voices clear … at least those of us who give a damn have … and if our voices alone aren’t enough, then in the words of the great civil rights leader John Lewis … 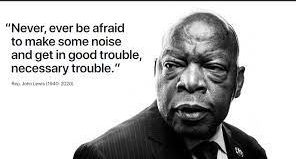