I sometimes have to laugh when I hear it said that the U.S. is such a progressive, forward-thinking nation, for others are far ahead of the U.S. in many ways.  One of those ways is plastics, or more specifically, the elimination of single-use plastics.  Take New Zealand, for example, the country that has committed to banning a swathe of single-use plastics, including cotton buds, bags, cutlery, plates and bowls, straws and fruit labels.

From an article in The Guardian …

New Zealand had already banned most single-use plastic bags in 2019, but the changes will include packaging for produce, as well as a range of other items. These steps follow similar bans overseas: outlawing plastic bags is now common around the world, and the UK introduced a ban on plastic straws, stirrers and cotton buds in 2020. The EU has voted for a similar ban to be introduced this year. In some countries, Covid-19 has stalled progress on plastics – a number of US states rolled back their bans on plastic bags and halted new legislation to limit plastic products as the pandemic reached its height. Environmental groups have also reported enormous quantities of “Covid waste” – including plastic gloves, hand sanitiser bottles and surgical masks – are clogging oceans.

The U.S. lags far behind.  Even though I take my own re-usable canvas bags to the grocery store, and mesh produce bags so that I do not have to use the store’s plastic bags, I am amazed by the amount of plastic I am still bringing home each week from the grocery.  Produce and meat that are pre-wrapped in plastic are the worst culprits. Laundry detergent, dish detergent and almost all cleaning products are packaged in plastic.  And why can’t the producers of bottled water find another material from which to make their bottles?  I would gladly pay a bit more to know that the bottle is re-cyclable.

Did you know that the average person in the U.S. throws away 231 pounds of plastic per year???  The UK isn’t far behind, at 218 pounds of plastic waste per person per annum.  According to a study published in Science Advances … 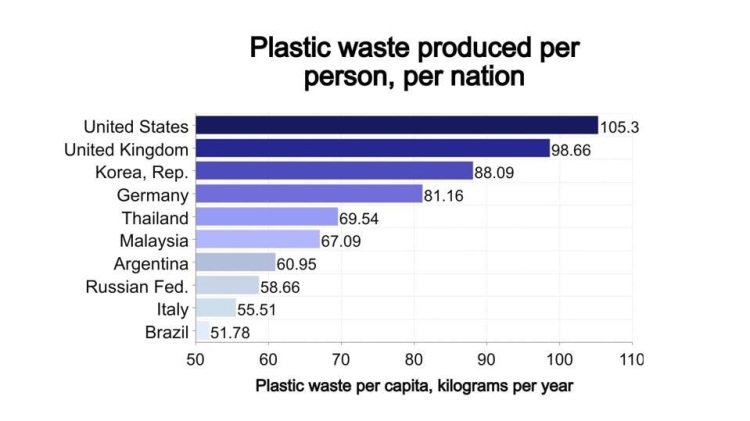 … 300 million tons of plastic trash are produced annually, of which at least 8.8 million tons end up in the ocean.  What’s that you say?  Recycling?  HAH!  It doesn’t work much for plastics and only about 9% of plastic can be recycled.  Why?  Mainly because it is an expensive operation and has very little payback.  In other words, profit over life once again.  Oh, and remember that plastics are made from petroleum products — fossil fuels — so if we cut back on plastics, we will also be helping the environment in another way, less oil being produced.

The solution, as I see it, is two-step.  One, yes governments must work diligently to reduce plastic waste via single-use plastics.  But more importantly, and a more long-term solution, is the companies that produce all this garbage must invest in research to develop a more sustainable product, one that is fairly easily recycled and that is biodegradable.  But meanwhile, until that happens, it is up to US … You and I … the consumer, to “Just say ‘no’” to single use plastics.  Refuse to buy products that are packaged in layers of plastic.  Take your own re-usable cups to Starbucks and fast-food places.  Take your own reusable bags to the grocery.  Every little bit helps, my friends.

NPR: The Plastic Problem Isn’t Your Fault, But You Can Be Part Of The Solution 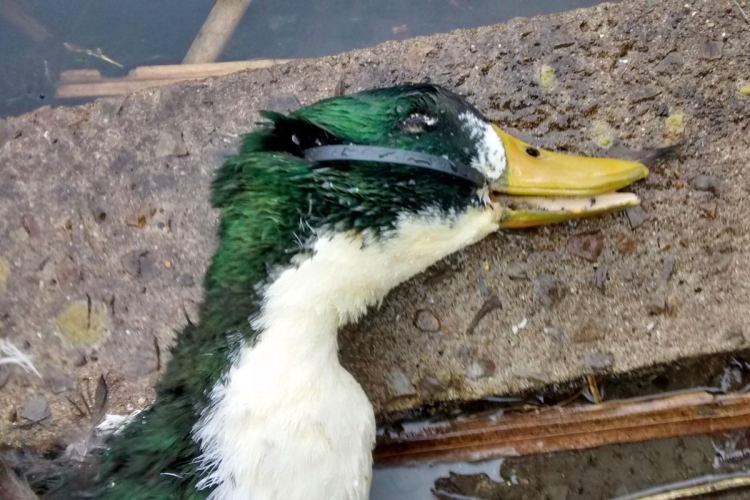