I’m in rather a rant-y mood this evening, so tell you what … I’ll share my angst with you, just in case your life was feeling a bit too peaceful at the moment.  No need to thank me.

Jim Banks is a representative in the U.S. House of Representatives from Indiana.  Jim Banks is apparently not a very conscionable person, apparently has forgotten that Oath of Office he last took on January 3rd of this year.  He has served in the House since 2017, though for the life of me I cannot imagine why.

That’s congressman Banks above … looks like a real sharp one, yes?

Naturally Mr. Banks was one of many Republicans to contest the results of the 2020 election, even knowing that President Biden had won fairly and honestly, but it seems to be some sort of rite of initiation for those in the GOP to perpetuate the Big Lie and even put their integrity on the line to do so.  But it’s his latest transgression that has Filosofa growling.  Mr. Banks is urging his party to punish every lawmaker investigating the attempted coup at the U.S. Capitol on January 6th.  Punish them?  For doing their jobs?  For trying to find out how and why and by whom our democratic foundations were damn near overthrown???  What the hell planet spawned this dude?

“When we win back the majority next year, we have a duty as Republicans to hold every member of this committee accountable for this abuse of power, for stepping over the line, by preventing them from being in positions of authority. Take them off any committee, get them as far away from positions of power as you can because they’ve shown us that by threatening to do this that they abuse their power, wherever they are.”

I voted in November.  I voted for President Biden.  Many of you reading this voted for him also.  And this jackass is saying that our votes, our voices, our only representation in the government we fund should have been erased and that nobody should even try to figure out how, why, and by whom?  Indianans … you all really need to recall this clown before somebody does it for you!

Oh, and if you want the icing on the cake … the ignominious Tucker Carlson’s son works for Mr. Banks! Birds of a feather …

I have a right to kill my people!

Good ol’ Florida governor Ron DeSantis is back in the news.  On Friday, Florida Judge John Cooper ruled on a lawsuit brought by parents who say DeSantis overstepped his authority when his administration said school districts couldn’t order students to wear masks. DeSantis had warned that “there will be consequences” for districts that defied the ban.

Score one for sanity.  But wait … DeSantis is already threatening (“promising”) to appeal immediately, for he seems to believe that he is God, not the governor, and that as such, he has a right to condemn a large swath of his state to death.

Meanwhile, it looks as if Floridians are finally starting to see the light.  A Quinnipiac University poll released this month had DeSantis’ approval rating dipping below 50 percent, with 47 percent approving of his job performance, and 45 percent disapproving. Those numbers dropped to 44-51 when asked about his handling of public schools. The Quinnipiac poll follows other public polling that shows a similar erosion to DeSantis’ approval rating. A St. Pete Polls survey earlier this month showed 43 percent approved of the job he was doing while 48 percent did not.  And this is the man who was considering a run for president in 2024?  🤣 🤣 🤣

And then in other Florida news, with hospitals nearly full to capacity and 17,000 hospitalized with Covid, turns out the morgues are also filling up.

“The Central Florida Division of AdventHealth has reached capacity of our hospital morgues due to an influx of COVID-19 patients. We have begun utilizing rented, refrigerated coolers at 10 of our campuses throughout Orange, Osceola, Polk, Seminole, & Volusia counties. These coolers are quickly becoming filled also.” 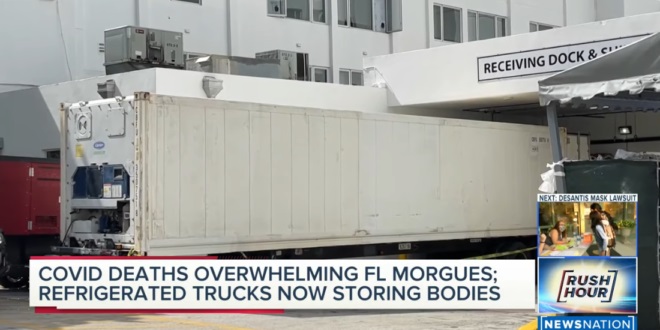 All because one man has a god-complex and thinks that “he alone can fix this”.  Wonder where he got that ego?