I first wrote and published this post in February 2018 and I think Dr. Ivankovich deserves a redux, for he is truly one of the ‘good people’ in this world.

Every Wednesday, I go in search of good people who are giving of themselves to others.  They are not hard to find, but so often go unnoticed because they are busy taking care of business and do not have time to toot their own horns as others may do.

It seems that we only hear about the bad things in Chicago:  the crime, drugs, gangs and violence.  But there are some really good people doing their best to help people survive and thrive.  Meet Dr. Daniel Ivankovich.

In 2010 after seeing so many in the Chicago area who were left without the ability to pay for medical care turned away, Dr. Ivankovich decided it was time to do something positive.  He and his wife, Karla, started the nonprofit OnePatient Global Health Initiative, a non-profit “designed to establish sustainable programs of outreach, prevention and patient education at multiple locations throughout the disparate areas of Chicago.”

Today, Ivankovich runs three clinics in Chicago and performs more than 600 surgeries a year. He says more than 100,000 people have benefited from the program.

“I know I can’t fix everybody. My goal is to be the battering ram to help break down the barriers to get these patients the care and the resources they need.”

In an interview last year, Dr. Ivankovich was asked why his mission is to help people without insurance. 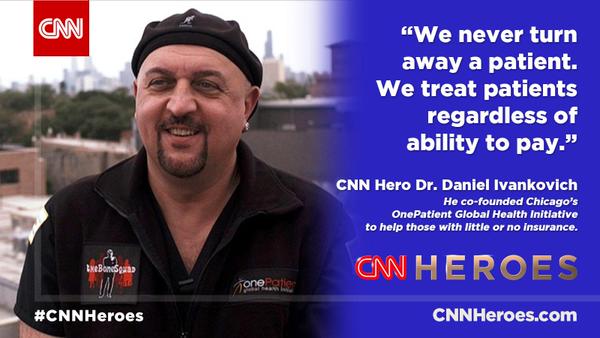 “Many people who are uninsured or on Medicaid are forced to ignore their health issues. So when they can’t put it off anymore, they use emergency rooms as their primary source of medical treatment and aren’t able to access any follow-up care, which could potentially cause a basic injury to become life-threatening.

Oftentimes when a patient’s finally made it to our clinic, they tell me they’ve been hung up on by 10 or 12 other physician providers because they don’t have insurance. It’s heartbreaking when you hear the struggles that the patients have to go through for the basics.”

Patients are never turned away from the OnePatient clinics for lack of insurance or inability to pay.  But Dr. Ivankovich’s good works don’t stop there.  After the 2010 Haiti earthquake, Ivankovich and his team airlifted thousands of tons of medical supplies to the country’s capital, Port-au-Prince. He collaborated with Team Rubicon1 USA to set up mobile forward-assist surgical teams (F.A.S.T.) to treat hundreds of Haitians with severe injuries. For his work in the aftermath of the Haitian earthquake, Ivankovich was named one of Chicago magazine’s 2010 Chicagoans of the Year, and the National Association of Social Workers Illinois 2010 Public Citizen of the Year.

Dr. Ivankovich with victim of earthquake in Haiti, 2010

Now, a few coincidences came into play at this point in my research.  First, among Ivankovich’s several nicknames, he is often called Dr. Dan (the others include Chicago Slim and Reverend Doctor D).  Remember my black history persona from Monday, about another Dr. Dan — Dr. Daniel Hale Williams, who founded Provident Hospital, the first interracial hospital in the nation?  Well, guess where Dr. Dan Ivankovich practiced from 2002 to 2007?  Yep, none other than Provident Hospital!  Not relevant, but I thought it was an interesting coincidence.

While at Provident Hospital, Dr. Ivankovich was a bit of a rebel, apparently, criticizing the hospital for spending too little on patient care and too much on administrative salaries and non-patient costs.  He and two other like-minded doctors were dismissed in April 2007.

Dr. Dan knows how to lighten up and have some fun, too, and he is a founding member of the Chicago Blues All-Stars.  Ivankovich provides vocals and plays electric guitar. He has played alongside many Chicago blues and rock musicians, such as Chuck Berry and Bo Diddley.  Check out the short clip (1:11) … Dr. Dan is the one in the light-coloured shirt and the dark hat.

I frequently criticize the medical industry, for that is what it is becoming, an industry, rather than the humanitarian field I once thought it was.  But medical professionals like Dr. Ivankovich are the exception and deserve to be in the spotlight.  In short, we need a lot more like him.

1 Another coincidence — I wrote about Team Rubicon in a ‘Good People” post last October!