I am feeling snarky today … and you know what that means!

Alabama … one of the most close-minded states in the union.  When the state redrew its district maps based on the 2020 census last year, it did so with one goal in mind – to dilute the votes of the Black portion of the state’s population.

Alabama is comprised of a population that is 27% Black, yet under the new map, they only have some 14% representation.  The Supreme Court … the last resort for justice … has failed in its duty, has given a ‘hats off’ to racism, to white supremacy.  Justices Thomas, Alito, Gorsuch, Kavanaugh, and Barrett are no longer deserving of the respect their seats on the bench might have otherwise afforded them.

Both Justice Elena Kagan and Chief Justice Roberts wrote dissenting opinions to which Kavanaugh wrote a convoluted rebuttal that isn’t even worth repeating.

State Supreme Courts in both Ohio and North Carolina have struck down heavily gerrymandered maps as well.  Will those cases end up in the laps of the U.S. Supreme Court justices and will they again vote in favour of white supremacy?  Stay tuned …

Remember I told you recently of the IRS’ plan to require a video selfie of your face plus a photo ID in order to access your tax data on their site?  Well guess what?  They’ve changed their mind!  Score one for sanity, for the right to privacy!  Apparently, they heard from enough of us that we consider this a dangerous invasion of our privacy that they backed down … at least for now.  According to agency commissioner Charles P. Rettig …

“The I.R.S. takes taxpayer privacy and security seriously, and we understand the concerns that have been raised. Everyone should feel comfortable with how their personal information is secured, and we are quickly pursuing short-term options that do not involve facial recognition.”

Score one for We the People!  For once, our voices were heard and actually listened to.

I recently read that people with heart conditions, cancer, and other health issues are being put on the back burner for medical care including hospitalization, often having to wait for weeks or even months, because most resources are being used to treat Covid patients.  Now, on the surface this would make sense, but one must think below the surface … only an inch or so below … and realize that 99% of Covid patients whose conditions are serious enough to warrant hospitalization, refused to be vaccinated.  In my book, and I’m sure there are many who will disagree with me, these people should be at the bottom of the list, for they brought it on themselves, whereas cancer and heart patients are truly victims of their disease.

I see an anti-vaxxer with Covid as a victim of his own suicide, so to speak.  Medical resources are already stretched thin … why should the man or woman who refused to take steps to preserve their own health be awarded priority treatment?  Let them go to the back of the line and at the end of the day, if doctors and nurses still have the time and energy, then they can take care of the patients who believed that their personal freedom was the only thing that mattered.

Last but not least … take a look at this cartoon by Ed Wexler … think long and hard about it, for it is so spot-on in our society today … tragically spot-on. 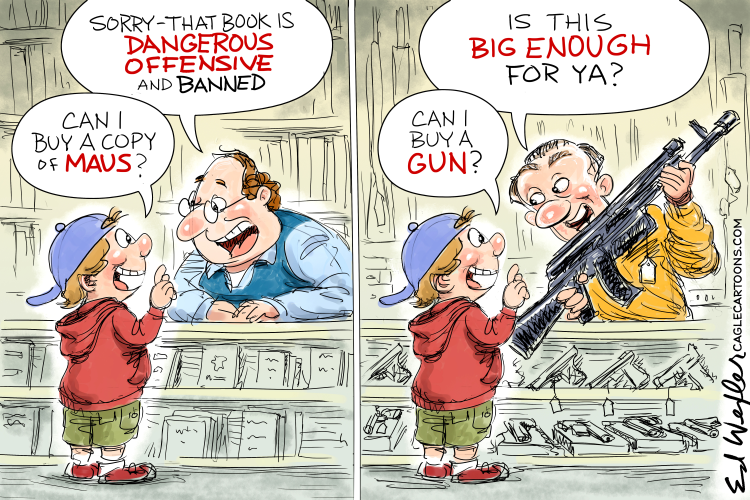 21 thoughts on “The Cure For Winter Doldrums? SNARKY SNIPPETS!!!”