This is a repeat of one of my first Saturday Surprise’s back in August 2017.  Wow!  It doesn’t seem like it’s been nearly 5 years since I first added ‘Saturday Surprise’ to my weekly lineup!  I remember that when I was pondering the idea, one of my readers at the time, Bushka, suggested that perhaps I was taking on too much, spreading myself too thin, but over the years I’ve found that I enjoy finding fun things to share and it’s a welcome break from my normal weekly posts.  I hope you’ll forgive me for this repeat post, but I’m quite tired tonight and couldn’t seem to come up with anything new, so I decided to give myself a break and at the same time, give you some unique critters to enjoy!

One of the suggestions for the new Saturday Surprise feature came from Eschudel of Zombie Flamingos who suggested a ‘Snapshot Saturday’ with unusual or interesting pictures from the week.  Sounded like a good idea, so I went in search of and found a hodge-podge of unusual, touching pictures, but as I was loading them onto this post, I concluded that there needed to be a theme.  So, I sat down and ate dinner, responded to comments from the day, chatted a bit with the family, and then when I came back to work, a theme hit me!  (No, it didn’t hurt … at least not much.)  What about unusual animals?  So, I once again went in search of … and I found some really, really strange creatures (no, I wasn’t in a bar!!!).  So … sit back and take a look at some of these guys!

The Mutillidae are a family of more than 3,000 species of wasps (despite the names) whose wingless females resemble large, hairy ants. Found in Chile, they are known for their extremely painful stings, hence the common name cow killer or cow ant. Black and white specimens are sometimes known as panda ants due to their hair coloration resembling that of the Chinese giant panda. (Image credits: Chris Lukhaup)

As this hawk-moth feeds on flowers and makes a similar humming sound, it looks a lot like a hummingbird. What’s interesting is that it is surprisingly good at learning colors. (Image credits: Jerzy Strzelecki | unknown) 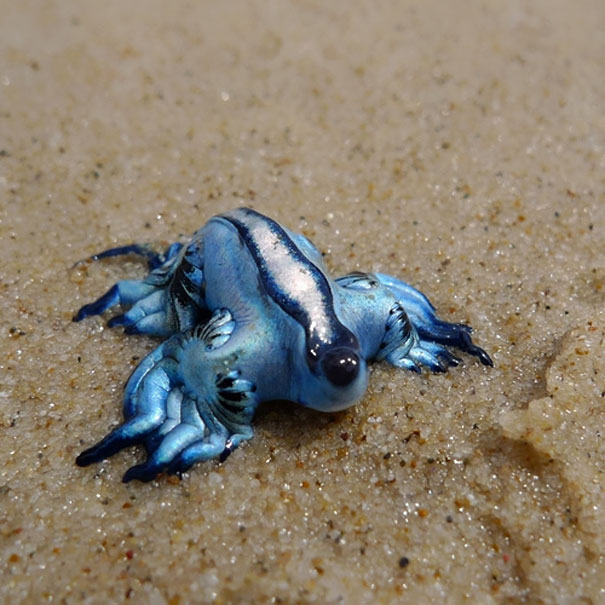 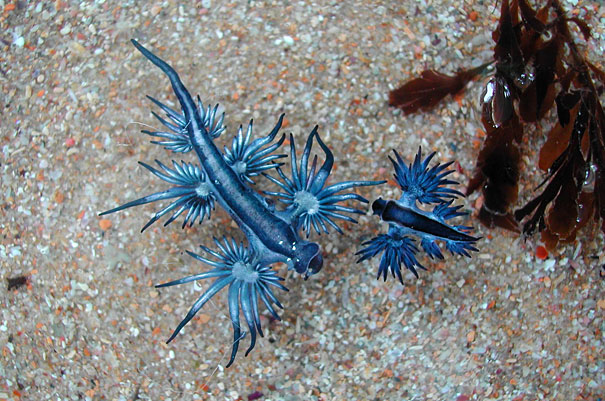 Also known as the blue dragon, this creature is a is a species of blue sea slug. You could find it in warm waters of the oceans, as it floats on the surface because of a gas-filled sac in its stomach. (Image credits: unknown | unknown | paulhypnos)

Discovered in Venezuela in 2009, this new species of alien-looking moth is still poorly explored. Waiting for more info about them! (Image credits: Arthur Anker | imgur)

This bright blue fish can be found in the waters of the Atlantic Ocean, and spends 80% of its time searching for food. (Image credits: imgur | depalmadise)

This mammal is native to the Democratic Republic of the Congo in Central Africa. Despite the zebra-like stripes, it is actually more closely related to giraffes. (Image credits: marylandzoo.org | baynews9.com) 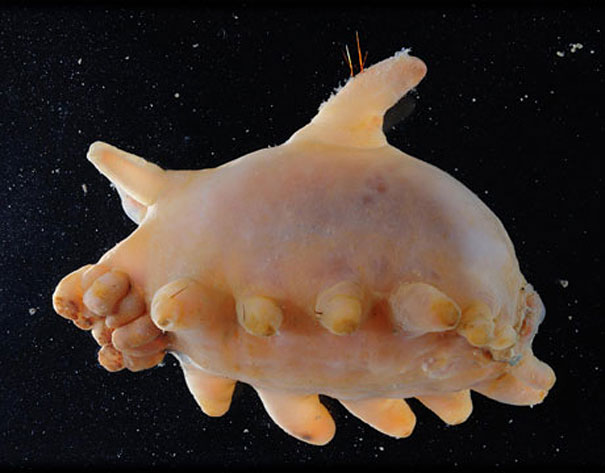 Scotoplanes live on deep ocean bottoms, specifically on the abyssal plain in the Atlantic, Pacific and Indian Ocean, typically at depths of over 1000 meters. They are deposit feeders, and obtain food by extracting organic particles from deep-sea mud. (Image credits: imgur | thedailygreen.com | realcoldfish)

Due to its bizarre appearance and unusual feeding habits, the aye-aye is considered by many to be the strangest primate in the world. It is the world’s largest nocturnal primate. Unusual physical characteristics include incisors that are continually growing (unique among primates), extremely large ears, and a middle finger which is skeletal in appearance, and is used by the animal as a primary sensory organ.

Aren’t they all just adorable?  Which was your favourite?  I am torn between the Okapi and the Aye-aye.  I had fun finding these guys … there are many, many more, so we shall do this again sometime soon.

54 thoughts on “Saturday Surprise — In Pictures”