Madeleine Albright was one heck of a woman, my friends.  Her death last week took me aback, though it shouldn’t have, given that she was 84 years old!  I wanted to write a tribute to her, but didn’t know quite where to begin, for she was truly larger than life.  Ms. Albright served as U.S. Ambassador to the United Nations from 1993 to 1997, and as U.S. Secretary of State in the Clinton administrations from 1997 to 2001, but those are facts … they are single-dimensional and they don’t tell who Madeleine Albright was, the person she was.

While I struggled to write a memorable tribute, one that would be worthy of the woman she was and what she gave to the world, I stumbled across a tribute written by none other than Hillary Clinton.  I think Ms. Clinton captured the essence of who Madeleine Albright was, for she had a personal connection, and her words are far more moving than mine would have been.  Thus, I share with you, a tribute to a great woman, Madeleine Albright!

Madeleine Albright Warned Us, and She Was Right 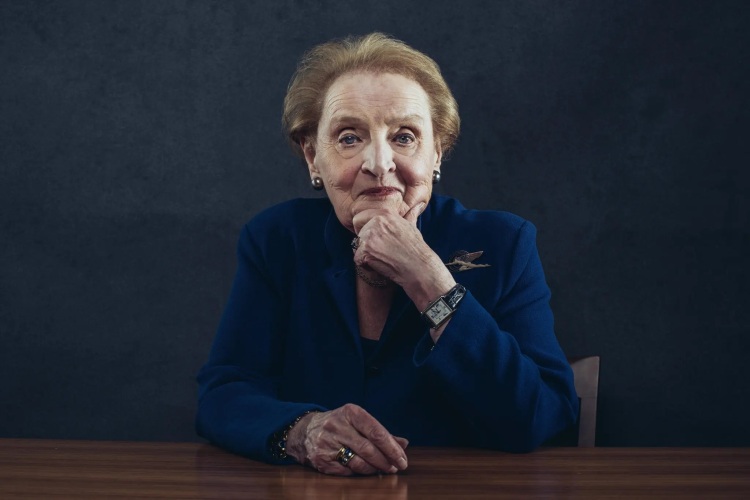 Late one night in 1995, in a cramped airplane cabin high over the Pacific, Madeleine Albright put down a draft of a speech I was set to deliver in Beijing at the upcoming United Nations conference on women, fixed me with the firm stare that had made fearsome dictators shudder, and asked what I was really trying to accomplish with this address.

That was Madeleine, always cutting right to the heart of the matter with clarity and courage. She pushed the envelope her entire life. She did it on behalf of women and girls, shattering the glass ceiling of diplomacy as the first woman to serve as secretary of state and calling out atrocities against women all over the world. She did it for the country that took her in as a child fleeing tyranny in Europe, championing the United States as an indispensable nation and the leader of the free world. She never stopped pushing the envelope for freedom and democracy, including cajoling sometimes skeptical generals and diplomats to see human rights as a national security imperative.

For Bill and me and her many friends all over the world, Madeleine’s passing is a painful personal loss. She was irrepressible: wickedly funny, stylish and always game for adventure and fun. I’ll never forget how excited she was to walk me through the streets of her native Prague and show me the yellow house where she lived as a girl. We couldn’t stop laughing when an unexpected rainstorm blew our umbrellas inside out, and couldn’t stop smiling when the captivating playwright and dissident turned president Václav Havel charmed us over dinner. Madeleine was 10 years ahead of me at Wellesley, and for decades we used to address and sign our notes to each other “Dear ’59” and “Love, ’69.”

Madeleine’s death is also a great loss for our country and for the cause of democracy at a time when it is under serious and sustained threat around the world and here at home. Now more than ever, we could use Madeleine’s vital voice, her cleareyed view of a dangerous world and her unstinting faith in both the unique power of the American idea and the universal appeal of freedom and democracy. We can honor her memory by heeding her wisdom.

Stand up to bullies and dictators

In the 1990s, when my husband named Madeleine U.N. ambassador and then secretary of state, she went toe-to-toe with the blood-soaked Serbian dictator Slobodan Milosevic. She helped marshal American power and the NATO alliance to end the brutal war in Bosnia and ethnic cleansing in Kosovo. She saw the chronically underestimated Russian president Vladimir Putin for what he is: a vicious autocrat intent on reclaiming Russia’s lost empire and a committed foe of democracy everywhere. In a prescient column in The Times published Feb. 23, she warned that an invasion of Ukraine would be “a historic error” that would leave Russia “diplomatically isolated, economically crippled and strategically vulnerable in the face of a stronger, more united Western alliance.” As happened so often, the man with the guns was wrong and Madeleine was right. 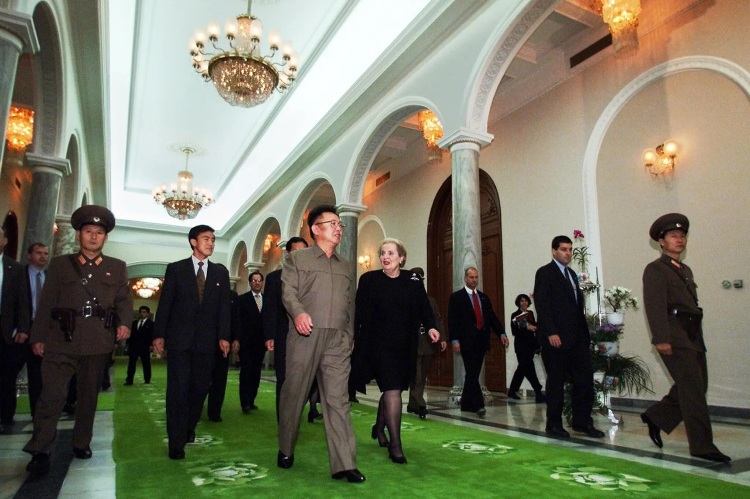 She was a woman of action, especially when facing injustice. Madeleine understood that American power is the only thing standing between the rules-based global order and the rule of the sword. That did not mean she was ever quick or casual about the use of force, even for the right cause. Madeleine was a diplomat’s diplomat, ready to talk to even the most odious adversary to advance the prospects of peace. In 2000, she was the first secretary of state to travel to North Korea, where she spent 12 hours negotiating with the dictator Kim Jong-il. But, as she often said, her crucial historical frame of reference was Munich, not Vietnam, so she had a deep appreciation for the risks of inaction. Today, with a rising tide of authoritarianism threatening democracy not just in Ukraine but all over the world, that is a lesson worth remembering.

NATO and U.S. alliances are the cornerstone of world peace

As secretary of state, Madeleine helped my husband welcome Poland, Hungary and the Czech Republic into NATO after the end of the Cold War. Years later, I asked her to head up an international commission for the Obama administration to redefine NATO’s mission for the 21st century. Having experienced Europe’s historic traumas firsthand, she understood that the security provided by NATO was the key to keeping the continent free, peaceful and undivided. She saw it as a political alliance, not just a military pact, cementing democracy in countries that had only recently freed themselves from authoritarianism.

Madeleine rejected the criticism, renewed recently, that NATO’s expansion needlessly provoked Russia and is to blame for its invasion of Ukraine. As the Princeton historian Stephen Kotkin has noted, that argument ignores Russia’s centuries-long efforts to dominate its neighbors. Madeleine would be quick to add that it also erases the aspirations and autonomy of the former Soviet bloc countries that threw off their chains, built fragile democracies and rightly worried about Russian revanchism. She would encourage us to listen to the insights of leaders like our friend Mr. Havel, who said the message of NATO expansion is that “Europe is no longer, and must never again be, divided over the heads of its people and against their will into any spheres of interest or influence.”

Make no mistake, if NATO had not expanded, Mr. Putin would be menacing not just Ukraine but the Baltic States and likely all of Eastern Europe. As the historian and journalist Anne Applebaum recently argued, “The expansion of NATO was the most successful, if not the only truly successful, piece of American foreign policy of the last 30 years.”

Madeleine also strongly disagreed with Donald Trump’s approach of treating America’s alliances as a protection racket where our partners must pay tribute or fend for themselves. She knew that U.S. alliances — especially with other democracies — are a military, diplomatic and economic asset that neither Russia nor China can match, despite their best efforts, and are crucial for our own national security.

They make it harder for the United States and our allies to champion human rights and the rule of law. In her searing 2018 book, “Fascism: A Warning,” Madeleine described Mr. Trump as the first U.S. president in the modern era “whose statements and actions are so at odds with democratic ideals.” She observed that his assault on democratic norms and institutions was “catnip” for autocrats like Mr. Putin. After the insurrection on Jan. 6, 2021, and Mr. Trump’s efforts to overturn a free and fair election, Madeleine imagined Abraham Lincoln weeping. “My family came to America after fleeing a coup, so I know that freedom is fragile,” she wrote. “But I never thought I would see such an assault on democracy be cheered on from the Oval Office.” With the Republican Party recently declaring the insurrection and events that led to it to be “legitimate political discourse,” and some of the party’s most powerful media allies pushing Kremlin talking points on Fox News and elsewhere, it’s clear that the threat to our democracy that so alarmed Madeleine remains an urgent crisis.

The fundamental truth that Madeleine understood and that informed her views on all these challenges is that America’s strength flows not just from our military or economic might but from our core values. Back in 1995, Madeleine told me a story that still inspires me. To celebrate the 50th anniversary of the end of World War II, she visited parts of the Czech Republic that had been liberated by American troops in 1945. Many people waved American flags as she passed, and to her surprise, some had just 48 stars. They had to be decades old. It turned out that American G.I.s had handed out the flags a half-century earlier. Czech families said they had kept them hidden all through the years of Soviet domination, passing them down from generation to generation as the embodiment of their hope for a better, freer future.

Madeleine knew exactly what that meant. Even at the end of her life, she treasured her first glimpse of the Statue of Liberty, sailing into New York Harbor in 1948 as an 11-year-old refugee on a ship called the S.S. America. She would have been thrilled by President Biden’s announcement on Thursday that the United States will welcome up to 100,000 refugees fleeing Ukraine, and she would encourage us to do more to respond to this unfolding humanitarian nightmare. She would warn, as she did in her book, about the “self-centered moral numbness that allows Fascism to thrive,” and urge us to keep pushing the envelope for freedom, human rights and democracy. We should listen.

38 thoughts on “A Tribute To A Great Woman — Madeleine Albright”