There are so damn many issues to claim our attention and concern today that it seems something important is always falling by the wayside.  There are some things, though, that we simply cannot afford to lose sight of – climate change, the threats to democracy, the ‘dumbing-down’ of education, the pandemic that is still a pandemic, and our massive gun problem.  Speaking of the gun crisis … I have looked at the ‘bi-partisan’ agreement in Congress and said, “pbthhhh … it has no teeth.”  In my book, it is even less than the very minimum I would expect or demand, were I in a position to make demands.  It is the Republican’s attempt to placate us, to shut us up, to brag that they took our concerns seriously, when they don’t at all.  Did you know that according to the latest NPR/PBS NewsHour/Marist poll, 59% favor curbing gun violence, while 35% do not. That includes 92% of Democrats in favor, along with 54% of independents. However, “70% of Republicans say it’s more important to protect gun rights.”

Yesterday, Paul Waldman published an OpEd in The Washington Post that echoes my own sentiments on the topic …

More guns in schools, and everywhere else? Have we gone mad? 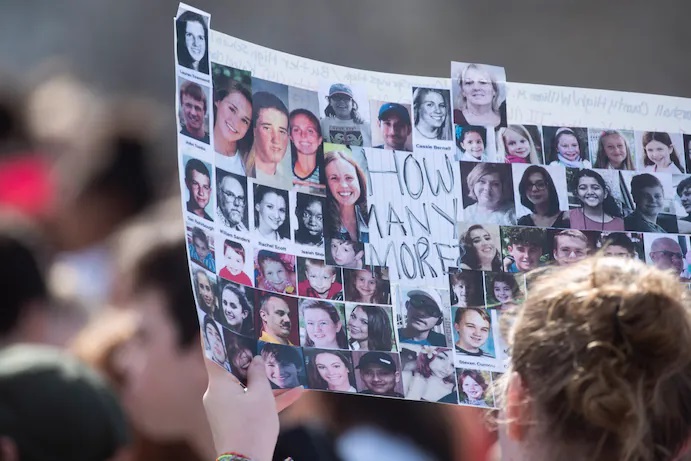 There’s nothing like a massacre of elementary school children to get the attention of lawmakers, who will be eager to show they’re at least willing to pretend to do something about the gun carnage we Americans endure. But while Democratic states often respond to mass shootings by passing new gun restrictions, Republican states tend to pass laws loosening regulations, driven by the psychotic idea that protecting us from gun violence requires getting more guns in more places.

While there are some glimmers of hope — senators might soon agree on a few worthwhile things on guns — we might emerge from this moment realizing that the flurry of lawmaking after the latest mass shootings took us to an even darker place.

If you want a hint of the dystopian future that might await us, look no further than a bill Ohio Gov. Mike DeWine (R) signed into law Monday.

The new law’s guiding principle seems to be that we should turn every school into an armed camp as quickly as possible. The law lowers the amount of training required for a teacher to go armed in Ohio from around 700 hours down to 24 hours. According to its text, teacher training must include “at least four hours of training in scenario-based or simulated training exercises.” Four whole hours!

Think for a moment about your schoolteachers, or your children’s teachers. Maybe a few were past their prime and not as enthusiastic as they used to be. Some were young and idealistic, devoted to the well being of children. Some were brilliant; all had a difficult and stressful job.

But I’ll bet none of them were Jason Bourne, were they?

This is the world Republicans want us to live in, where every spasm of deadly violence is met with what is essentially a military response. If we face a threat from guns, we should get more guns and put them in more people’s hands. If there’s a school shooting, it means schools are “soft targets” that we must harden. Then we’ll do the same to stores and parks and synagogues and churches and mosques — and everywhere else we gather.

It’s a tribute to the GOP’s political and communication skills that it can take any idea, no matter how deranged — we have mass shootings because schools have too many doors! — and push it right to the heart of the discussion. Yes, we could theoretically turn your neighborhood elementary school into something like a supermax prison, but what would that do to the children inside?

We already have a clue from the proliferation of active-shooter lockdown drills in recent years. Meant to tell students that “this will keep you safe,” instead it told them that “this is the nightmare you live in now.” Over and over, they were told to live in fear, that a violent death was their possible future. In some cases, officials have organized simulated attacks where murders were acted out; as one teacher said, “I felt more traumatized than trained.”

We simply don’t know what kind of effects members of this lockdown generation will carry with them. But we’re apparently going to keep subjecting more and more kids to it — better that than force anyone to suffer any minor inconvenience when purchasing their arsenal of deadly weapons.

That’s certainly how the Republicans who control the state legislature in Ohio feel. On the same day DeWine signed that bill, another one he signed took effect. This one enacts “permitless carry,” meaning almost anyone is allowed to carry a gun almost anywhere in the state — no license or training required.

What we have here is a profound disagreement about what it means for a place to feel, and to be, “safe.” You can weld shut the doors and windows, fill the school with armed personnel and make the kids think every day about their deaths, and you will have achieved a kind of “safety.” But it’s a poisonous kind, one that will terrorize every child who enters there.

Unfortunately, we’re going to see a lot of that in the near future, because “hardening” schools is one of the only ideas Republicans will agree to in response to mass shootings. Money for “school safety” will be in the bipartisan gun bill (if it passes), and states will offer the same, so Republicans can say they responded to the endless wave of mass shootings.

Heaven forbid we should say someone has to be 21 years old to buy a military-style rifle designed to kill as many human beings as possible in the shortest amount of time. But if your school wants a grant to install more metal detectors? Step right up.

And Mrs. O’Neill, the kindly librarian at the elementary school? Put a gun in her hand. That’ll make everyone safe, won’t it?

23 thoughts on “A Toothless, Useless, Waste of Time”